Scent of a Storm

This post is part of a virtual book tour organized by Goddess Fish Promotions. Annette Oppenlander will be awarding a $15 Amazon or B/N GC  to a randomly drawn winner via rafflecopter during the tour. 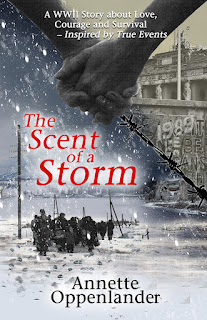 Eastern Prussia, 1944: Young lovers Annie and Werner are separated from each other when he is drafted into Hitler’s Volkssturm. While the SS orders Werner to remove the dead bodies of frozen refugees from Königsberg’s streets, Annie discovers she is pregnant. As she urgently awaits Werner’s return, rumors of the advancing Red Army mount and with it, alarming reports of what they do to women. Running for their lives, Annie and her mother embark on a life-threatening journey west. Even before they can escape by boat, Annie makes a horrifying mistake, one that will haunt her forever. Werner, arrested and imprisoned in a Russian gulag, manages to escape after four months of cruelty and returns home. But his and Annie’s farms lie abandoned—the love of his life and his own family have vanished…

East Berlin, 1989: On the evening of November 9, when the borders between East and West Berlin open for the first time in nearly thirty years—a day which ultimately heralds Germany’s reunification—Annie watches a correspondent on West TV who reminds her of her childhood sweetheart Werner, the man she has thought dead for 45 years. Together with her daughter Emma, Annie sets out on a search...

I didn’t survive because I was smarter, faster, stronger, more cunning, or better prepared; it was coincidence. Undoubtedly, I should’ve died, especially after what I did—in the end I survived.

But for what price?

What is lucky about a life filled with so much terror and hardship—a life in which one loses everything except for the shreds of cloth on the skin? Oh, I don’t mean possessions; I don’t mean things, not even precious keepsakes. I mean my mother and father and the intangible things, a life and future in a place I called home…my roots and sense of belonging—and Werner, the love of my life.

Still, I did make it out. I survived and forged a new existence.

I tell myself that on days when the world turns gray, even black. When I feel the urge to hide and shut out all thought and wonder what the sense of it is. Isn’t there supposed to be a purpose—some kind of meaning—to a life?

I’d always been free, had learned to take care of myself, had explored the country and my world with my best friend, Werner. Until like millions of others, I became a chess piece being pushed this way and that, manipulated, controlled, and administered by the criminals of the Third Reich, the dictators of Russia, the dictators of East Germany (and their spy network, the Stasi), by the unemployment office, and even by the refugee office, who told me what to think and do, where to sleep, and how to eat. I’d lost even the most basic sense of self-determination.

And over all of it hung the unmovable cloud of having lost Werner, of not knowing what had happened to him.

A historical fiction novel to touch your heart. This is a very accurate view of the events that occurred during WW 2. It’s also a love story. A sad story of two young people, their lives changed forever with the horrible changes caused by the war. A well-written novel.

Annette Oppenlander is an award-winning writer, literary coach and educator. As a bestselling historical novelist, Oppenlander is known for her authentic characters and stories based on true events, coming alive in well-researched settings. Having lived in Germany the first half of her life and the second half in various parts in the U.S., Oppenlander inspires readers by illuminating story questions as relevant today as they were in the past.

Oppenlander shares her knowledge through writing workshops at colleges, libraries, festivals and schools. She also offers vivid presentations and author visits. The mother of fraternal twins and a son, she recently returned to her home, Solingen, Germany where she lives with her husband.

Nominations/Awards for Surviving the Fatherland