The New Caliphate will stop at nothing to get their hands on his wife’s scientific research, which is believed to hold the key to unleashing chaos in the West and advancing their cause.

But in reality it’s Ben’s biometrics that have the potential to unlock the information they so desperately need. Within the oceanic world of Pelagia, in the year 2066, Ben finds sanctuary among the sea settlers of the South Pacific Pelagic Territory, but his respite is short-lived. 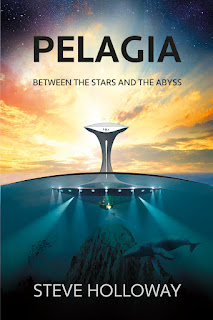 He lifted the hatch and placed it onto the deck, then pulled himself up and lay flat near the bow. The coolness of the storm awakened his senses. Rolling onto his back, he paused under the deluge and allowed the rain to stream into his mouth, gulping down the water.

Thirst barely slaked, he slithered to the edge of the boat. The wind now lashed his wet body. He shivered, staring into the night, allowing his eyes to adjust. He spotted the island, a dark fleeting promise glimpsed through a break in the squall.

Looking back, he saw a silhouette climb out onto the side of the boat. Adrenaline shot through him. The man was just a few metres away, clinging to a rail as the boat rolled under them, but still looking towards the stern. Ben inched closer to the edge of the bow, willing himself to be a shadow.

Holding the safety rail, Ben swung himself over the side with the roll of the boat. He hung for a moment, suspended above the sea. Large, deep breaths. Each time the boat tipped his feet dipped beneath the waves. On the third tip, he released his grip, slipping below the surface noiselessly.

As he surfaced, he heard the man on deck shouting into the water in Arabic, “Cut the rope!” There was an answering shout from the water that was lost in the roar of rain.

Ben kept to the shadow of the bow rocking above him. After a minute, that seemed like an eternity, the man climbed back into the stern cockpit. Ben slipped below the water. 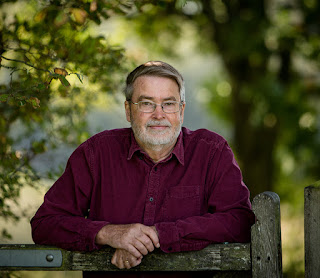 Steve Holloway grew up on the beach cities of Los Angeles and has always loved the sea. This passion led him to gain a degree in Aquatic Biology from the University of California Santa Barbara; a background which opened many opportunities for him in researching, developing, and engaging with mariculture activities around the world.

Steve and his wife have lived and travelled in many countries over their forty years of marriage, successfully raising three kids in exotic locations in the process. They have always engaged with the people and cultures they live among.

Steve has always loved books and writing. The story of Pelagia reflects three of his passions: science, the sea and the narratives of faith. The background, in his words:

“I have for many years believed that settling the open sea was within our grasp, and even more accessible than space as our ‘next frontier’. So through the last ten years or so I have been thinking just how this might happen, what would be needed, where people would settle, what kind of livelihoods they might have on the open sea, beyond the EEZs of terrestrial countries. My son Adam told me about what would become a key component of Pelagia, Biorock or seacrete, because of his experiments with it. Many discussions with other scientists, engineers and others helped to begin to fill in the gaps and the concept of the Pelagic Territories, similar to the unincorporated territories of the early US, and what geopolitical contexts they would find themselves in.”

Steve finds any excuse to get into the ocean: sailing, diving, swimming, or just poking around tide pools.

Yes, Pelagia is a distillation of my years of experience as a marine biologist, also of years of traveling and learning from people of many cultures. The challenge of turning these memories into a story made the book a lot of fun to write.

I was highly motivated to write this story to inspire readers to dream new of a new societies – communities of ocean-dwellers. Everything I have written about in Pelagia is doable. The only thing needed is the resolve to explore, pioneer and expand onto this Blue Frontier in environmentally sensitive ways.

As for the dedication, I wanted to acknowledge my deep debt and appreciation to my wife, partner, love and friend of forty years who has shared this lifetime of experience with me. From the dedication page of Pelagia:

To the steady star of my life, Kitty, whose encouragement,
support, patience – and occasional prod – helped distil this
book from a dream

I have a very active imagination, so many of the story lines, characters and scenes appear in my mind’s eye. And so I just write what I have seen. Of course, these imaginations are all influenced by experiences I’ve had, people I've met and stories I’ve read through the years. My observations bubble away in my subconscious and then emerge through my fingers into a tapestry of words.

I also follow some advice I was given a few years ago: to write the story I would like to read. To tell you the truth, more than reading about this world of Pelagia, I would love to live there!

Pelagia as a concept and story has been, as I mention above stewing in the back of my mind for many years. I think I wrote the first two scenes twelve years ago. My life has been busy, so, even though I wanted to try my hand at writing fiction, it was hard to find time. Then five years ago, while taking a sabbatical from my job, I realized that if I wanted to write a story, it was now or never. So, I dove into the deep end and learned to swim.

I discovered there was much I needed to learn about the craft of writing fiction. I found that there were many willing to encourage and mentor me.

Once the first draft was done, Pelagia gained a life of its own as I took it through nine drafts with various editors and reviewers. It was far more work than I had expected when I started out, but the journey has been worthwhile. What an adventure it has been!

Well, I’ve only written one fiction book so far. However, this one story contains a variety of genres. Though I have classed it as ‘science fiction’, it is probably more correct to say it is 'speculative fiction', about a world set in the future. The future I write about is not utopian or dystopian, it is a human future – a future our children and grandchildren may well live in.

The story is 'hard sci-fi' as it is well grounded in science. It is also 'sociological fiction', as I explore deep relational and spiritual issues my characters face against the drama of settling the open seas.

The book is also a 'techno-thriller', as the characters face life-threatening situations they must overcome with resolve and resourcefulness.

I find I do my best writing in solitude. I will often find an isolated cottage on the coast somewhere and spend a week, two weeks, or even a month immersed in the story I’m writing.

While at home, I can review and polish sections of a story, but solitude provides me with the mental space for the characters and their stories to emerge. Normal life is full of too many relationships and distractions for me to focus.

Although I tend to be an extrovert and love being with people, I am also very comfortable with solitude, at home in my own skin. While on a writing retreat, I take long walks to reflect on the story as it is emerging, then I sit down and write for hours.

My wife has been very kind to allow me to take these extended writing breaks. I love her even more for that.

My grandmother inspired me to love words and writing. I enjoyed playing word games with her, like Scrabble and Anagrams. She would read things I had written and encourage me. She predicted that I would someday be an author. She was an invalid due to arthritis, but her mind remained sharp and free despite the limitations of her body.

I have always loved reading, soaking up good writing like a sponge. Like a painter learning to paint by copying the masters, I would often try to duplicate the style and ‘feel’ of authors I liked. And I have taken the opportunity to write stories for my children, as well as capture my experiences in prose to share with friends.