This post is part of a virtual book tour organized by Goddess Fish Promotions. Amanda Meuwissen will be awarding a $25  Amazon or B/N GC to a randomly drawn winner via rafflecopter during the tour. 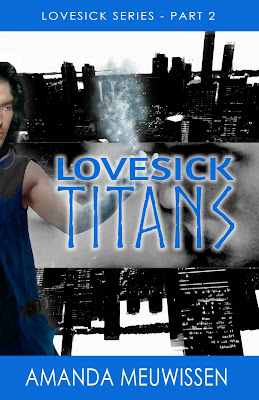 Not even a Titan can always stand up to a God.

Malcom Cho is in over his head, wrapped up in a love affair with his superhero nemesis Zeus, who most people in Olympus City only know as Detective Danny Grant.

Lovesick Titans begins where Lovesick Gods left off, after a heist gone wrong that ended with a museum guard dead and Mal and Danny beaten and exhausted from their fight with the new threat in town, Cassidy Ludgate—Hades.

Unaware that Ludgate’s true motivation is revenge for the death of his father at Zeus’s hands, Mal wants only to keep Danny close, while Danny races to solve the cases surrounding Ludgate to stop him from whatever he has planned for them next.

What Mal doesn’t know is that Danny didn’t pursue him with the purest of intentions but sought to break his heart in retaliation for not being there when he needed him in the fight against Thanatos. Even though Danny no longer seeks that end, the lies between them loom like a shadow about to descend upon them both.

And Hades has only begun to toy with them…


“Giving up already, Danny? You really are pathetic.”

Danny barely flinched at hearing his own voice coming from the mirrors across the room. Andre hadn’t finished a version of the Miasma Maker for the house yet. By tomorrow, Wednesday at the latest, he’d said. Maybe Andre would have pushed harder if Danny had told anyone he was being haunted by his reflection.

“Go away, Ludgate. Aren’t you getting enough of what you want? You could steal anything that suited you and I couldn’t lift a finger. If you’re not going to kill me, then just go away.” He wondered if he could fight back if Ludgate attacked him. He didn’t seem to have the energy to even raise his head.

“Looking to take the easy way out? Figures. Everything that makes you worth something you’ve already ruined. Better to get out clean now before you drag anyone else through the mud, right?”

Danny’s hand clenched tighter around the pill bottle. He dragged himself up from the bed and glared at his reflection, hating it—which was only too easy these days. “What do you even want from me?” he hissed, afraid to yell and bring John or Joey running. “You’ve already won. Even if we catch you someday, you won. You’re a better thief than Prometheus, and you’ve proven Zeus can’t stop you. So what do you want?”

The smug smirk on his reflection’s face made him want to punch it, but he knew that wouldn’t do any good. Even the half-healed burns that made Danny's skin feel tight and sore while speaking didn't seem to bother his reflection. But of course they wouldn’t bother him. The reflection wasn’t really Danny.

“It’s funny, you know,” the man in the mirror said. The pill bottle wasn’t in his hand; he didn’t need it. He seemed to walk closer to Danny, filling the mirror, which made Danny step closer too. “Funny that you think I’m Ludgate,” he said and then vanished just as Danny heard a whisper at his ear, “and not just in your head.”

Amanda Meuwissen has been writing and posting online for many years, including maintaining the website and blog for the software company Outsell. She is an avid writer and consumer of fiction through film, prose, and video games, and is the author of the 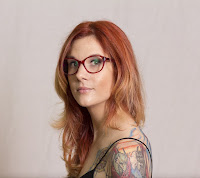 paranormal romance trilogy The Incubus Saga and young adult novel Life as a Teenage Vampire. Amanda lives in Minneapolis, MN, with her husband, John, and their two cats.