This post is part of a virtual book tour organized by Goddess Fish Promotions. Jodi Ashland will be awarding a $25  Amazon or B/N GC to a randomly drawn winner via rafflecopter during the tour. 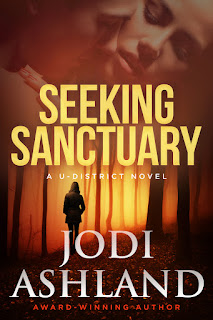 She thwarted a killer’s attack. He’s off the case because of their prior involvement. Now, they’re at the top of the hit list…

Aleks Levin promised herself she'd never become a victim again. Out for a late evening run, she spies something terrible: a serial killer attempting to murder his next victim. Aleks interrupts the deed and saves the woman's life, but in the process she becomes the only witness to the U-District Strangler's brutal attacks. Refusing protective custody, Aleks has a better idea for keeping safe: pretending to date a detective on the case…

Neal Hawkins never knew if he'd see the alluring Aleks again, but he certainly didn't expect such life-or-death circumstances when he did. After their prior involvement gets Neal kicked off the case, he can't help but continue to investigate as the killer creeps closer to his next victim… her. The detective knows that sheltering Aleks is the best way to keep her safe, though he wonders if there's any way to suppress the sparks that start flying the minute she crosses his threshold.

Caught in a deadly game of cat and mouse, old wounds and secret lives threaten to reveal the Strangler's identity. Can Aleks and Neal stop the killer before his reign of terror continues with them?

Seeking Sanctuary is the third standalone novel in the captivating U-District series of romantic suspense novels. If you like sizzling chemistry, edgy characters, and twists you won't see coming, then you'll love Jodi Ashland's riveting tale.

This is the story of a strong college age young woman who gets involved with a cop by thwarting a serial killer from suffocating another blonde. Aleks finds the killer while out jogging. She takes him on and fights. Fortunately, she was able to use the pepper spray she carries while running. When she successfully saves the life of another young girl who is prey to the killer, her life changes in every way. She becomes in great danger. A cop who she had previously met says he will protect her, will stay right by her side until the killer is found.  Unfortunately, this cop, Neal, is “sort of” dating an ER nurse, Kenzie, who Aleks knows. Neal is, of course, attracted to both.

I think the “dating two ladies” is a hint of what I got rather tired of in this book. I didn’t get tired of Neal playing the field, more power to him. However, Neal was constantly back and forth about the fact that he was so attracted to Aleks but shouldn’t lead her on OR he was thinking Kinzie was the one for him and feeling bad thinking about Aleks. That left Aleks working constantly to make Neal love her and to turn him on and Neal wanting to become involved but holding back. It all got really redundant. I wanted to tell him to be a man and make up his mind.
Don’t get me wrong, I had no trouble finishing the book. I found it easy to read most of the time and there were some very intense moments and surprises. The characters were easy to picture hence their development. Either the storyline should have been developed more fully which would have been my preference or the book should have been shorter.

Jodi Ashland has four books listed, all of which have very good reviews. Check them out.

“Why don’t you two get out of the car, so I can properly introduce Aleks to the police commissioner?”

Neal nodded. Nothing like a good dose of his captain to cool the libido.

When Cap walked off toward the commissioner, Aleks whispered, “He totally bought that.”

Neal stared into those whiskey eyes. She was playing it cool, but something more lurked under that façade. She’d felt it too. The question of the week, month, and year was, what did it mean?

There was no doubt they were physically attracted to one another. But now that he’d had a taste of her again, he craved what she could give him.

Is that enough to build something on?

The one night with Aleks had been fantastic, but what about a relationship? Could he see going the long haul with her?

Aleks climbed back to her seat and grabbed her hat. “Is my lipstick smudged?”

He looked down at her lips. Not good. They only made him want to kiss her again. “Yeah.”

She pulled the visor down and used her finger to clear any smudges. “Let’s go meet the commish, honey.”

This whole boyfriend-girlfriend thing was a terrible idea. He got out of the car and walked to her side to open the door after he confirmed their surroundings were safe. He leaned in to pull the Glock out of the glove compartment and inhaled her fresh scent.

Neal helped Aleks out of the car. He kept her hand in his to maintain appearances. It had nothing to do with the fact he wanted to hold her hand, that he’d grown accustomed to it, or that it felt right. 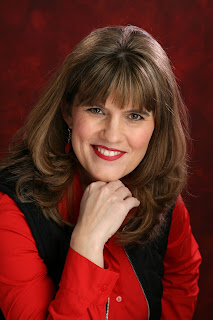 Jodi Ashland is an award-winning author of romantic suspense. If you enjoy reading about empowered women who overcome adversity, flawed sexy heroes who love them, and action packed mystery and suspense, then you’ll love Jodi Ashland’s books. Jodi has a B.S. in Information Systems and an M.B.A. but has pursued her true passion writing novels and poems. She is a mother of two, cancer survivor, kayaker, skier, gardener, camper, and lover of all things outdoors.

Visit Jodi Ashland on any of her social media sites where she looks forward to meeting you.

To stay on top of the latest hot releases, sign up for her VIP Reader newsletter at www.jodiashland.com.

Check out these other hosting blogs on the tour.