This post is part of a virtual book tour organized by Goddess Fish Promotions. Marie Johnston will be awarding a $10 Amazon/BN GC to a randomly drawn winner via rafflecopter during the tour. 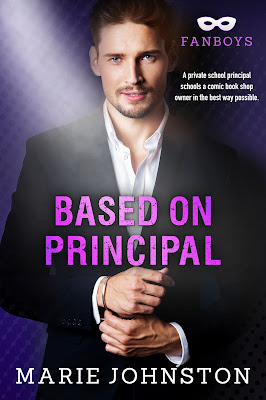 By day, Natalia is the strict principal of a private school with a staid, troubled legacy. By night, she’s a lithe, agile assassin with a penchant for latex. Or at least her cosplay character is. The two identities don’t mingle until she meets a handsome comic book shop owner at the local comic con. Now there’s a guy she’d be willing to peel her mask off for.

Too bad he’s the father of one of her students.

Single father Chris has no time to date, thanks to his business, his daughter, and his ex’s meddling family. But how can he resist a comic lover in a business skirt? She’s his perfect woman. Or she would be, if she didn’t keep the professional and play parts of her life so separate. And he swore he’d never date a woman ashamed of him again.

Too bad she’s obsessed with what the wrong people think of her.

Together, they could be an unstoppable duo, but when Chris’s daughter acts out at school, Natalia will be put in an impossible position: break all her school’s rules, or pack away her cape forever.

Read an excerpt...
“About the name calling—”

Jaycee cut Ms. Shaw off. “Oh my god. Mr. Budinski’s an adult, and he’s getting snippy about a kid messing up his name?”

“Jaycee…” He hadn’t expected to finish his warning, but Ms. Shaw was gazing at him like she was waiting for him to finish. He scrambled to find an acceptable reproach. “It’s about respect.”

“Then he can respect what I want to be called. Yet he refuses to use Richards.” She crossed one leg over the other and folded her arms. He knew that mutinous look, the one she wore when she refused to listen. A spear of fear went through him when she pinned Ms. Shaw with that look. “I mean what if people called you Mrs. Shaw and knew perfectly well you’re not married.” He cringed at the way she stressed not married. It wasn’t a death sentence to be single. “Or what if they called you Natalie instead of Natalia.”

He jerked his head to face Ms. Shaw. Natalia Shaw. What were the odds her name was the same as—


Marie Johnston lives in the upper-Midwest with her husband, four kids, an old cat, and a young dog. After trading in her lab coat for a laptop, she’s writing down all the tales she’s

been making up in her head for years. An avid reader of paranormal romance, these are the stories hanging out and waiting to be told, between the demands of work, home, and the endless chauffeuring that comes with children.


Check out all these stops on the Tour