This post is part of a virtual book tour organized by Goddess Fish Promotions. Elaine Cantrell will be awarding a $15 Amazon/BN GC to a randomly drawn winner via rafflecopter during the tour. Click on the tour banner to see the other stops on the tour. 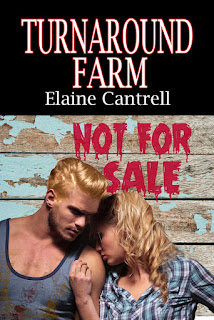 Dedicated career girl Holly Grant has no time for romance. She doesn’t need a man to complete her, thank you very much. Building Grant Realty takes all of her time and attention. If she can close a deal for Turnaround Farm, her business will take off like a rocket. Her first problem is that Jeb Wakefield doesn’t want to sell his farm, and her second problem is Jeb’s grandson Dan, the finest looking man Holly’s ever seen.

He had no idea what had come over him, but he ignored the small voice in his head that told him to leave her alone and took a step closer to her. The aroma of her perfume teased his nose with its light, floral scent.

Holly gasped when his hands gently came to rest on her shoulders. Dan swept her hair to one side and brushed the side of her neck with his lips. He turned her around and pulled her close. “Put your arms around me, Holly.”

He saw a pulse wildly beating in her throat, but she slid her arms around him.

Dan pulled her head onto his shoulder and stroked her hair, reveling in its silky, blonde beauty. “I love your hair,” he whispered.

Dan never knew how it happened. One minute the two of them were standing beside the bed; the next they were on the bed stretched out side by side with their arms around each other. Oh, the feel of her...soft and warm and yielding!

When their eyes met, he knew that if they didn’t get out of bed immediately, he would make love to her. And he could think of nothing he wanted more.

Maybe Holly saw it too because she seemed to recover her senses. “We shouldn’t do this,” she gasped. “This is the kind of thing my mother does.”

“I know.” Dan sat up on the side of the bed and observed, “Your bed smells like you and the perfume you wear.” 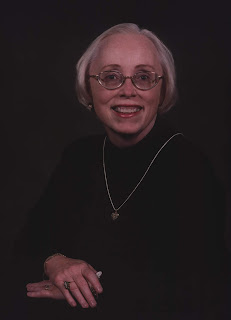 Born and raised in South Carolina, I hold a master’s degree in personnel services from Clemson University and am a member of Romance Writers of America and Alpha Delta Kappa, an international honorary society for women educators. I’ve been married for forty-five years to my college sweetheart. We have two sons who’ve given us three wonderful grandchildren. We also have a sweet calico kitty, and a devoted little black and white dog.

I've been writing since 2001 when my son asked me to proofread a book he'd written. I figured if he could write a book, so could I. My first published novel, A New Leaf, was the winner of the 2003 Timeless Love contest. If I wasn't sold on writing before, that did it. I've been writing ever since and don't have any plans to stop. Frankly, I don't think I could even if I wanted to. Writing is a strange compulsion that drives me to spend long hours in front of a keyboard when I could be doing important things like napping or eating chocolate. My house isn't dusted as often, I rarely cook, and who cares if the laundry gets done or not. Yeah, no doubt about it, I'm addicted.