This post is part of a virtual book tour organized by Goddess Fish Promotions. Tim Brown will be awarding a $25 Amazon or Barnes and Noble GC to a randomly drawn winner via rafflecopter during the tour. Click on the tour banner to see the other stops on the tour. 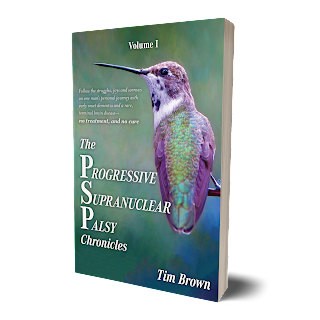 Follow the struggles, joys and sorrows on one man's personal journey as he chronicles his travails with early onset dementia and a rare, terminal brain disease- no treatment, and no cure.

Read an Exerpt
Now the worst part of the exam was about to be begin. The technician did a series of checks making sure the instrument was properly calibrated the light was working, and the monitor was in the correct position, so Trish and I could see the procedure. The nasal violation began. Up my right nostril – every inch felt like a foot – and slowly down the back of my mouth. It was then I learned I had a strong gag reflex.

This turned out to be a big surprise to me. Being familiar with the symptoms of both ALS and Parkinsons, I really thought this would be a downer to read. However, while it was a good insight to a man’s thoughts while knowing what his future would look like, it was also educational and truly had the occasional bit of humor we all need to get through life each day. Although you would think a book about such illness would be sad but in truth, while the whole darned subject is sad, this was not written in that manner.
I also thought it would read or seem clinical in its reading format. While it does deal with many doctor’s appointments and explanations, it’s interesting and fairly easy to read. It is called a memoir. I think a better description might be a person’s daily diary as they try to get through each day, as they must progressively deal with more and more deterioration.
Among all of the things I have written, I should also say that this book is written by a man who worked in a factory, had an autistic son and a great wife, but never conspired to write or become an author. He is an everyday person just like the rest of us only living with the onset of a horrible disease. While his aim might not have been to become an author, he has most certainly done so with this book. It’s well laid out and easy to read. Educational as I have said, but laid out so that even a layman can understand.
He is of such strong spirit. I hope this book will be an inspiration to many people to come, be they readers, caregivers, or people diagnosed with this or any such devastating illness. 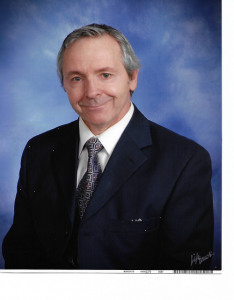 T.J. Brown-an ordinary family man with an extraordinary story. He is from Toronto, On but has called the small town of Ayr, in southwestern Ontario home for the past twenty-five years. He worked in the automotive parts manufacturing sector until five years ago when he had to leave work life due to illness. Tim has been blogging his PSP journey, sharing his personal experiences with this disease as well as FTD - frontotemporal dementia. His readership spans the globe. Through his efforts, it is Tim’s hope to give voice to those suffering from PSP and similar diseases that no longer have a voice of their own. Advocating for those affected... patients, spouses, families and friends. Always, with the goal of raising awareness, understanding and support to further research into prime of life brain diseases. He has made his story universal, yet personal and relatable.