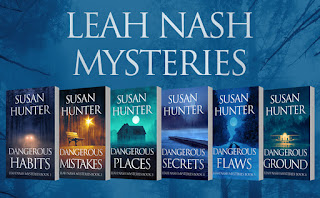 
A Murder Among Friends …

Everyone is anxious to connect with actor Ryan Malloy when he returns to town for his 15-year high school reunion. Everyone except crime writer Leah Nash. She doesn’t have many fond memories of Himmel High’s golden boy. But it turns out she’s not the only one who isn’t a fan. Before the weekend is over, Ryan Malloy is murdered.

The hard-headed but soft-hearted Leah is unwillingly drawn into investigating his death by the pleading of Ryan’s terminally ill mother. She soon discovers that Ryan’s self-absorbed journey through life trampled on the dreams of a number of people. His old girlfriend, his best friend, his own brother, a local businessman—there’s no shortage of suspects—or secrets. But the solution eludes Leah, until the past and the present collide in a dangerous confrontation that threatens one life and ends another.

This is a mystery about people’s feelings, how cruel people can sometimes be and...it’s about murder. All of this is  interspersed amongst a crime reporter having come back home to buy and try to save a failing newspaper. If you come from a small town like I did, we can all identify with the failing newspaper problem. But Leah Nash really has to save this one since she has invested a great deal of money in the venture and for her own sense of self as well.

The author, Susan Hunter, has done a good job here of describing the town, the scenes and the characters that live there. She made them very real which always increases the satisfaction in a story. The plot of the story itself evokes memories from our youth and also weaves quite a web making you truly unsure who the "bad" guy or girl might be. It's a  story of classmates, alumna, even town folk. Many of which loved the most popular guy in school back then or many who wanted to do away with him. Maybe we’re all familiar with that thought too (tee hee).

This is Book 6 in a series titled “Leah Nash Mysteries”. There is no question it can be read as a stand-alone, but I think all are probably equally worth the time to read. In fact, all have great reviews.


Susan Hunter is a charter member of Introverts International (which meets the 12th of Never at an undisclosed location). She has worked as a reporter and managing editor, during which time she received a first place UPI award for investigative reporting and a Michigan Press Association first place award for enterprise/feature reporting. Susan has also taught composition at the college level, written advertising copy, newsletters, press releases, speeches, web copy, academic papers, and memos. Lots and lots of memos. She lives in rural Michigan with her husband Gary, who is a man of action, not words.

During certain times of the day, she can be found wandering the mean streets of small-town Himmel, Wisconsin, looking for clues, stopping for a meal at the Elite Cafe, dropping off a story lead at the Himmel Times Weekly, or meeting friends for a drink at McClain's Bar and Grill.


Catch Up With Susan Hunter On:

This is a rafflecopter giveaway hosted by Partners in Crime Virtual Book Tours for Susan Hunter. There will be 1 winner of one (1) Amazon.com Gift Card. The giveaway begins on February 17, 2020 and runs through March 21, 2020. Void where prohibited.