Child of the Earth

Susan Crow will be awarding a $10 Amazon/BN GC to a randomly drawn winner via rafflecopter during the tour.


Here is a nest egg of memories and anecdotes teased from a life uplifted by an appreciation of the natural world.

Memories of childhood in rural England, raising a family in Orkney and Lincolnshire, and retirement in Northern Scotland are threaded together into a broad tapestry of the natural year. These experiences meet with a view of Earth's uncertain future to illustrate the necessity for respect of all lifeforms and shares a passion for the wellbeing of this planet with all generations.

Child of the Earth is a source of inspiration and delight - a literary garland of hope.

read an excerpt...
Growing against the friendly grey stone wall of our garden is a perfect Mothers’ Day gift of 2013. Dog roses. They are new but already showing great promise. The rose, in all its forms, has always pleased me – except, perhaps, for the poor blue rose which no one has been able to perfect. No matter how intricate a breeding programme is set up, it is a sad reflection on human intervention in the natural world. Not as sad as hunting animals to extinction but, even so, it makes one ponder. 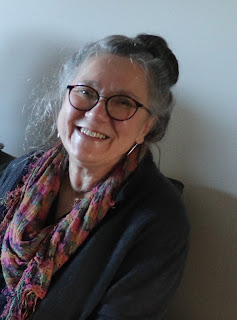 Susan grew up in the Isle of Axholme, which inspired the Crowvus best-seller, Child of the Isle. She has a deep love of nature which is apparent in all her writing from the poems she has had published in various anthologies, to her 2020 release, Child of the Earth.
Susan released Rosie Jane and the Swodgerump as part of the John O’Groats Book Festival. This story was written and inspired by raising her six children in Orkney. After moving to England for a while, Susan finally returned to North Scotland in 2009, and continues to write her monthly blogs, What’s It Like Up There?

Her latest book, Child of the Earth, is a nature companion, drawn from her own experiences throughout her life. It provides a colourful telling of Susan’s encounters with nature, told with a style which makes it accessible to all readers.


Does this book have a special meaning to you? i.e. where you found the idea, its symbolism, its meaning, who you dedicated it to, what made you want to write it?
Child of the Earth is a lifetime of observations in the natural world. It seemed to me that appreciating what was happening in one’s environment was the only way to be. After writing Child of the Isle (my childhood memoir), my readers mentioned that they would like to read my thoughts on, appreciation of, and hopes for our beautiful planet.
It is an honest account of my own development through my passion for nature. It’s meant to connect with the reader, whether another nature-lover, a reader who is interested in an account of nature, or someone who wants to open up the natural world to their children.
The book isn’t dedicated to any one person, but my close family have been hugely supportive and I think they know how grateful I am for their encouragement. I wanted to write the book, not just to share it with people who already connect with nature, but also to outline the considerable hope there is in engaging everyone with the natural world.  It seems to me that there has never been a better time to open up about one’s passion for the future of the planet. And, as I’ll never be a great orator(!), I saw a way of doing this in Child of the Earth.

Where do you get your storylines from?
Although Child of the Earth is a narrative nonfiction book, I have included some short stories which are connected with nature, and also anecdotal experiences. Where there are stories, they are usually from personal experience, having lived in Lincolnshire, Orkney and Caithness.
The beauty of writing narrative nonfiction, is also that I was able to create a personification of those things I had observed in nature. Highlighting that, for example, a sparrow has the same level of character as you or me.

Was this book easier or more difficult to write than others?  Why?
It is only my third book, and all three are quite different, so I couldn’t honestly say! It was thoroughly enjoyable and, rather than have to search for material, I had to edit some out!

Do you only write one genre?
No. As well as nature writing, I’ve published a memoir and a children’s book. Rosie Jane is making another appearance later this year, when I’m releasing the second in the series.

Give us a picture of where you write, where you compose these words…is it Starbucks, a den, a garden…we want to know your inner sanctum?
Oddly enough, I cannot write outside. As a child, in summertime the teacher would take us into the school garden for lessons, but I would just listen to, watch and smell everything around me. I couldn’t concentrate! It’s the same today. If I go out of doors, I’m observing everything which is happening in the natural world and I can’t focus on my writing. At the end of each day, I make notes in a nature diary and use them at a later date.  My favourite place to write is my very cosy little sitting room, on my very cosy sofa, with my very cosy lap-tray, surrounded by journals, diaries, books and - of course - my laptop!


I’ve always written short pieces and poems, from a very early age, but it’s only recently that I’ve actually taken my writing seriously.  Although I was successful in some poetry and short story competitions, it never occurred to me that people would want to read what I have to offer, until my wonderful family explained that I should believe more in myself. Now, more than ever, I want to offer support to those who feel unable to make a difference in the battle for the survival of this planet.