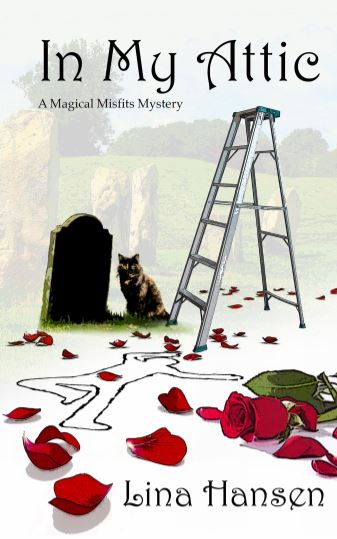 Myrtle’s aunt is dead—murdered—and she has inherited the Witch’s Retreat, a Bed and Breakfast in the idyllic village of Avebury. Filled with outrageous characters, the old house hides a mystery under its eaves. Everybody is a suspect: Alan, the blue-eyed police constable; Chris, the proverbial dark and handsome stranger; Myrtle’s curvy cousin Daisy; and even Tiddles, the flatulent cat. As Myrtle takes on the mantle of amateur sleuth, she bumbles along in search of answers, digging deeper and deeper among the tangled roots of her family’s history. The secrets she uncovers are more shocking than death: a hidden magical relic, a coven of amateur witches eager to gather her into the fold, and modern witch hunters on the prowl.

This is just a fun read. It’s light and humorous and a little quirky. So how can a murder mystery have me giggling? It’s very cozy-like. It has an inn called Witches Retreat. It has a couple of handsome men involved. It has a grammar schoolteacher involved feeling very guilty that she ignored what turned out to be her aunt’s last call...ever. And of course it has a dead body.

The paranormal genre is not my favorite. I’m a very black and white thinker so it doesn’t fit. However, I started this and didn’t put it down. The paranormal never interfered with what turned out to be a quick, humorous read. Sort of a feel-good murder mystery. Is that possible?

In My Attic is Book 1 of a series titled “A Magical Misfits Mystery”. I don’t see other books published by Lina Hansen. If this is a debut, she is off to a good start and hopefully writing Book 2.

LINA HANSEN has been a freelance travel journalist, teacher, bellydancer, postal clerk and science communication specialist stranded in the space sector. Numbed by factoid technical texts, she set out to write the stories she loves to read— cozy and romantic mysteries with a dollop of humour and a magical twist. After living and working in the UK, Lina, her husband, and their feline companion now share a home in the foothills of Castle Frankenstein. Lina is a double Watty Award Winner, Featured Author, and a Wattpad Star.