Rob Currie will be awarding a $10 Amazon/BN GC to a randomly drawn winner via rafflecopter during the tour. 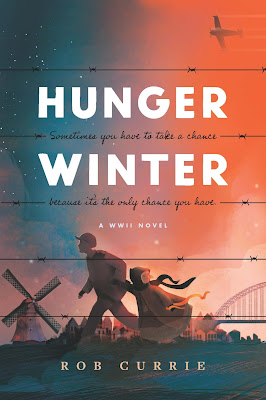 It's the Netherlands in late 1944. Thirteen-year-old Dirk's Papa left to fight with the Resistance. Then Mama died. When the Gestapo snatched his older sister and he learned they were coming for him next, Dirk left home in the middle of the night. He had his pockets stuffed with food, his little sister asleep in his arms, and his heart heavy with a dark secret.

read an excerpt...
“Your sentence has been determined,” he said.

Wrapping her tattered blanket around her shoulders, Els trudged down the hall, following other prisoners. Outside, the chilly breeze flapped her blanket, and she clutched it tighter. Guards formed the captives in a row, in front of a brick wall. More guards stood on the opposite side of the courtyard with rifles.

“Halt die Klappe” a soldier shouted. A light rain fell. Els put her hand on the shoulder of the man who had cried out. His weeping intensified. “Noo!” he cried, looking around as if appealing to some unseen authority.

“You are all guilty of crimes against the Third Reich,” an officer announced. “You have been sentenced, and now you will pay for what you have done.”

He looked at the soldiers. “Ready,” he shouted above the din of prisoners begging for mercy. The soldiers clutched their rifles.

Els cleared her throat and sang as loudly as she could in her weakened condition, “Grant that I may remain brave, your servant for always,” she began. Several prisoners joined her in singing the national anthem. “And may defeat the tyranny which pierces my heart.”

Thunder boomed and the rain fell harder. It wasn’t supposed to end like this. The Gestapo was supposed to realize Els would never talk, and they’d release her. And then she’d somehow find Dirk.

“Aim,” the officer said. The soldiers raised their rifles.


about Rob Currie...
Life conspired to get Rob Currie to write Hunger Winter: A World War II Novel. His father is a World War II veteran and his wife is Dutch. An award-winning author, it was only a matter of time before he would focus his writing on World War II. Research for Hunger Winter included numerous books, interviews with Dutch WWII survivors, and three weeks in the Netherlands. His investigation revealed astonishing details about the Dutch experience of the war, which begged to be turned into a book.

Born and raised in the suburbs of Detroit, he graduated from Cornerstone University and went on to earn a master's degree and doctorate in psychology from St. Louis University. He has taught psychology at Judson University since 1987. His hobbies include playing basketball, cooking, and writing poetry.

Does this book have a special meaning to you?
Hunger Winter has a great deal of meaning for me. My dad was a WWII veteran and I caught his contagious enthusiasm for the inspirational stories from that conflict. That’s probably why I pit a young man and his little sister against great obstacles. That’s what a compelling story does. It takes people you root for and puts them in an awful situation which seems nearly hopeless.
I got interested in the Dutch experience of the second World War because my wife is Dutch. That’s what started me on it but the details I learned when I dug into the research grabbed me and wouldn’t let go. I’ve read WWII books all my life and in this research I found things I’d never heard about before. I felt compelled to craft a story based on hardship and heroism of the Dutch people.

Lastly, the book has special meaning to me because half of my author’s royalties go to Compassion International, an organization which give food and hope to hungry children around the world.

Where do you get your storylines from?
Reading, reading, reading. The good thing about writing historical fiction is you don’t have to make things up. You write what happened. But the bad news about historical fiction is that you don’t get to make things up. First you have to find a true story that not everyone knows. And then you have to find a lot about it. Once you get all that information, transforming the dry data into compelling fiction is like making perfume. Just like it takes hundreds of flowers or more to make an ounce of perfume, it takes dozens of books to squeeze out a storyline with enough potency to draw readers in with an irresistible fragrance.

Give us a picture of where you write, where you compose these words.
I write in my messy office. Four floor-to-ceiling bookcases jammed with books and articles provide the raw material of writing. Historical fiction starts with lots of information. I draw ideas from these books the way a flower pulls moisture and nutrients from rich soil to make the plant flourish. On my desk, a frequently refilled 20-ounce glass of cold water sits within easy reach. I drink 100 ounces a day because it sharpens my focus. In the summer months, my second-hand bicycle waits in the hall, ready for the 40-minute ride home. Classical or other instrumental music wafts from my computer speakers. The musical aroma whets my appetite to write.

Was there any specific event or circumstance that made you want to be a writer?
When I was in college, I started writing little pieces and sharing them with my friends. Their encouragement lit a fire under me.

Do you only write one genre?
I have published non-fiction, creative nonfiction, and now fiction. The challenge of fiction is that it must be believable and interesting. That’s hard to do. If I told you I bought milk at the grocery store, that’s believable but not interesting. If I told you the Prime Minister of England hit me in the face with a chocolate cream pie, that’s interesting but not believable. It’s as hard to write interesting and believable book-length fiction as it is to tell a really long lie without saying anything that contradicts or gives away the falsehood of the story.