This post is part of a virtual book tour organized by Goddess Fish Promotions. Bobbi Smith will award a $10 Amazon/BN GC to a randomly drawn commenter. Click on the tour banner to see the other stops on the tour. 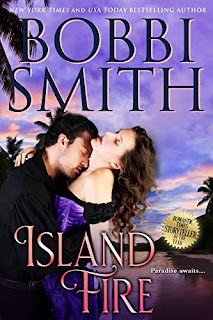 An untouched young girl finds a gorgeous man shipwrecked and washed up onshore on a tropical island in the Pacific and they find pure ecstasy and the promise of eternal love.

Espri Duchant saves the shipwrecked shipping magnate, and when his gaze meets hers, he celebrates his good luck. Adrift at sea, he survived when all the others perished. Innocent Espri Duchant has always sworn to guard her virtue. But when she discovers the handsome stranger lying on her beach, she soon vows she will kiss his chiseled lips, feel his tender touch. Espri is eager to learn the mysteries of sensual ecstasy—and when she finally succumbs to the passion of his powerful embrace, it is as if she has led him to it. Espri takes him to a sun-drenched island cove, the perfect hideaway with the lapping water like a cool sheet against the heat of their searing island love.

After being kidnapped, shanghaied, shipwrecked, and nearly drowned, Mitchell Williams sees no reason to wait for paradise—he’s already there! He will one day have to return to the helm of his profitable shipping company, but the next sailing ship will not pass by the remote Pacific island for many months. In the meantime, nothing can stop him from exulting in the sensual pleasure of this woman, her flawless flesh and natural beauty. She teases him that he will never turn to another and that no woman will ever satisfy him the way she does. Soon all he craves is her. He is enchanted by Espri’s island fire.

Read an Excerpt
The cup of rum had really helped Mitch. He could feel the sharp edge of his pain dulling beneath the liquor’s soothing onslaught. A sigh escaped him, and for the first time in months, he knew a moment of real peace.

Espri, ever sensitive to his well-being, feared something was wrong. “Are you all right?”

“I’m better than I have been in a long time.”

Espri smiled at his words. “Would you like to sit outside? The day is still young and the heat is not intense yet.”

Mitch quickly agreed to her suggestion and was starting to get up, when the sudden drop of the blanket effectively halted his actions.

“No, they were all but ripped off while you were in the sea, but I can fashion you a pareu, if you’d be more comfortable in one.”

“You’ll have to stand so I can secure the cloth about your hips,” Espri instructed as she came to him and grasped his arm to help him to his feet. Though she had known Mitch was tall, his upright male presence was overpowering to her. A quiver of excitement raced through her veins. Trying to ignore the feel of his firm muscles beneath her hands, she adjusted the cloth around his waist.

The slight touch of her body to his had an electrifying effect on him. He bent to her, whispering her name as his lips found hers, brushing them softly in a tentative caress that became more urgent.

Espri was taken by surprise, but she responded fully, knowing that this was what she’d been wanting and waiting for. Looping her arms around his neck, she strained nearer, needing to feel the hardness of his manly form against her.


About the Author:After working as a department manager for Famous-Barr, and briefly as a clerk at a bookstore, Bobbi gave up on career security and began writing. She sold her first book to Zebra in 1982.

Since then, Bobbi has written over 40 books and 6 novellas. To date, there are more than five million copies of her novels in print. She has been awarded the prestigious Romantic Times Storyteller Award and two Career Achievement Awards. Her books have appeared on the New York Times Best Seller List, the USA Today Best Seller List and the Wal-Mart Best Seller List.