This post is part of a virtual book tour organized by Goddess Fish Promotions. Ana T. Drew will award a $20 Amazon/BN GC to a randomly drawn winner. Click on the tour banner to see the other stops on the tour. 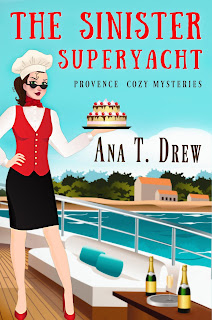 French tycoon Jean-Louis Ponsard is having a bad year.
Unwise investments, canceled orders, deals falling through…
In the thick of it, his yacht becomes the scene of a suspicious death, and his year of misfortune hits the bed of the Mediterranean Sea.
To make matters worse, the victim isn't just anybody.
She's his much-hated mother-in-law.

Onboard, caterer Julie Cavallo and her quirky grandma Rose do some poking around.
But every luxury cabin hides a secret.
Every passenger has an alibi or no reason to want the victim dead.
Discretion rules.
The crew keeps mum.
So do the marble countertops, gem-incrusted walls, and gold sinks.
When the cops take charge, things go to pieces, and not only for the Ponsard family.

Can Julie dive to the murky bottom of the sea, unravel the case, and come back up still breathing?

A quick read with fun quirky characters. I always enjoy a book when it involves pastries but this one was enjoyable as a story too.

When Julie’s sous chef becomes a murder suspect,  you just know she’s going to look into the murder and of course call on her grandma to help. Told you there were quirky characters... It’s a fun, feel good, laugh a little, read.

This is Book 2 in a series titled “a Provence Cozy Mystery”. Book 1 has a good review too. 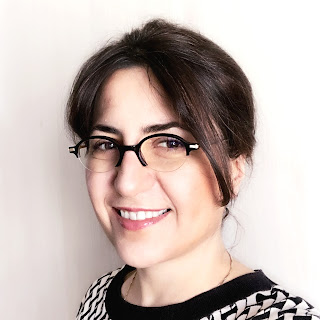 Ana T. Drew is the evil mastermind behind the recent series of murders in the fictional French town of Beldoc. When she is not writing cozy mysteries or doing mom-and-wife things, she can be found watching “The Rookie” to help her get over “Castle”. She lives in Paris but her heart is in Provence.

Happy Friday! I hope that you have enjoyed your book tour and I wish you the best of luck in all of your future endeavors. I am looking forward to reading your stories. Have a great weekend!