A Curse of Mayhem

Sunayna Prasad will be awarding a $25 Amazon/BN GC to a randomly drawn winner via rafflecopter during the tour. 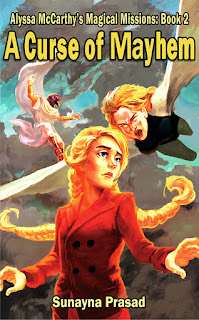 History, like magic, has a habit of repeating itself

It’s been six months since thirteen-year-old Alyssa McCarthy left magic behind for good. Or so she thought…

Then the enchanted objects that protected her disappear. Now a skeleton named Errol has cursed her with magical powers that keep getting her in trouble. Suddenly strange things are happening with disastrous effects, and if Alyssa can’t remove the magic, she will lose everything she holds dear.

In order to get rid of her unwanted wizardry, Alyssa will have to boost her bravery and confidence and determine who Errol really is. But every time Alyssa uses an enchantment, Errol is one step closer to getting his flesh back and becoming alive, and he will do anything to achieve his goals…even if it means destroying Alyssa’s happiness.

Originally published in 2016 as “Wizardry Goes Wild” and “The Unruly Curse” in 2019, “A Curse of Mayhem” is book two in the exciting and suspenseful “Magical Missions” series.

Several hours had passed. It was now ninth period, the last one before school ended. Only twenty minutes remained until the bell rang.

However, thanks to the library closing because two classes had occupied it, Alyssa hadn’t gotten to hone her presentation skills. Even the teachers monitoring the hallway had forbidden her to practice there.

Today through Wednesday, the students would present on different literary elements in the last novel they’d read, Angelica: A Whale Princess. Alyssa had been assigned to discuss the themes and morals of the book.

Mr. Godfrey, the teacher, had picked students randomly to read their brief speeches today, tomorrow, or Wednesday. Alyssa had been assigned for today. So, her stomach made several knots as she watched Sydney present on the characters from the book.

Usually, Mr. Godfrey had a more easygoing attitude toward the class. On his birthday last month, he hadn’t given homework. For the first assignment of the year, he’d played a game with the class to help them prepare for a quiz.

Alyssa wished that he’d let her and everyone else pick when they’d wanted to go—or he could’ve at least chosen the bravest speakers for today. She assumed that Mr. Godfrey knew that many children stuttered, hesitated, or got words wrong when having to present in front of crowds.

Sunayna Prasad enjoys writing fantasy books for children, as well as cooking, creating artwork, watching online videos, and blogging. She has also written The Frights of Fiji, formerly titled as From Frights to Flaws. She is passionate about modern life, fantasy, and world-building. Aside from her website, she also has a blog about different creative and entertaining topics, including fiction and writing, called “Sunayna Prasad’s Blog”.

Sunayna has graduated from college in May 2017. She lives in Long Island, NY.

I got inspired by "Frozen" and "ParaNorman". I did use some symbolism unintentionally.

They come to me naturally.

In between. The writing and content took a long time to improve, especially since it's a more complex story than book 1.

Not necessarily. I love fantasy, but I have written stories in literary or realistic genres too.

The idea of my main character popped into my head many years ago. Since then, I developed the story.

I liked the excerpt, sounds good.

Great excerpt, thanks for sharing!