K.A. Lugo will be awarding a $20 Amazon/BN GC to a randomly drawn winner via rafflecopter during the tour. 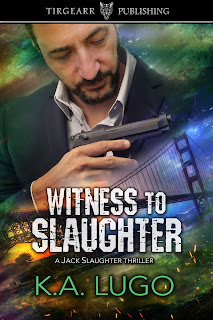 Jack has coped through previous holidays, but this one feels different. It's been four years since he lost his family, and clues to finding those responsible have dried up. Hopelessness has him so tightly wound that he's often driven out of his claustrophobic apartment before the ever-present black dog of depression drags him to a place where there's no coming back from.

Jack wants to be left alone with his sorrow, but when he's offered double his fee by the wife of one of the city's most elite families, how can he refuse? She wants him to follow her husband, Franklin, as she suspects he's cheating and needs photos to get around the strict prenup. Franklin leads Jack across the city to The Majestic Lounge, the Castro District's most popular gay nightclub. By the time he finds Franklin, Jack is forced to break up a heated argument between him and club owner, Chad Lucas.

Lucas approaches Jack the following day, wanting to hire him for added security during the club's popular annual Drag Queen Extravaganza. The event's usual excitement is marred by the deaths of several of Lucas' friends that authorities are calling suicides. Lucas convinces Jack something more nefarious is going on and agrees to the job.

Does the city have another serial killer on its hands, one who's targeting the LGBTQ community? Can Jack find a witness? Surely in the crowded nightclub, someone must have seen something.

I like this character Jack Slaughter that K.A. Lugo has created. His ambience alone would make me enjoy these books. Jack Slaughter is an ex-cop and now a Private Investigator. He’s caring but tough. Just like you picture this kind of P. I.

This book has a maybe even more unexpected plot than Book 1 but it has the same twists and turns. There is something it does not seem to have that Book 1 did. In Book 1 if you read my review, you’ll find I was a little frustrated by the author jumping around. I didn’t feel that way through the whole book and I did get to the point of enjoying it. This time though, while there are lots of twists and turns it seems that K.A. Lugo has her ducks all in a row. This is a well laid-out plot and good story written in a very readable manner.

What we have to wish is that there will be a Book 3 to look forward to.

Maria rubbed her belly for a moment then looked up at him again. "The baby is kicking. Do you want to feel?"

He didn't. Not really. "Sure." He moved to stand beside her and let her guide his hand. His large palm nearly covered the side of her extended belly. He felt the baby kick the moment he touched her. Then another. He pressed his palm against the spot, his legs nearly collapsing from the memories suddenly flooding his mind, of Leah pregnant with Zoë and the hours he'd spent feeling his daughter growing in the womb. From the memories of the day she was born and the absolute joy of holding her in his arms for the first time. And the few short years of seeing her growing every day and learning and laughing.

He tried snatching away his hand when the vision of his daughter's lifeless body punched him in the heart, but Maria held him fast. He shot his gaze up and met hers, finding it full of steely determination.

"I know this time of year is hard for you. Look at me," she said, forcing his gaze back on hers when looked away. "I can't possibly know what you're going through, but I think I understand. I must tell you. I'm worried. Sometimes it feels like . . . like you're pulling away from us."

Let me finish. We don't see you as much these days. Ray said he's tried calling you but you don't pick up. He's gone by your place and you're not there. You've started missing dinner nights. And tonight, he said you forgot to come over. This isn't like you, Jack. The two of you are practically joined at the hip. Even after all this time since you left the force. But these days— We need you, Jack."