Beth M. Caruso will be awarding a $25 Amazon/BN GC to a randomly drawn winner via rafflecopter during the tour. 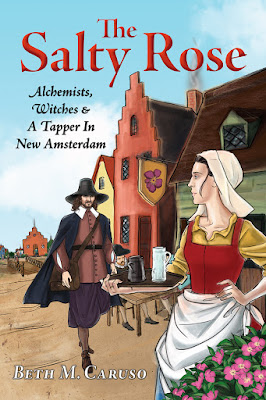 As the lives of Marie and John become intertwined through friendship and trade, a search for justice of a Dutch woman accused of witchcraft in Hartford puts them on a collision course affecting not only their own destinies but also the fate of colonial America.

The Director General slammed the gavel down with the harsh thud of an ending.

“Marie du Trieux, you are hereby banished from New Netherland forever!” he said.

As I held on to the railing of a departing schooner, I remembered the jarring finality of those stark words against me. Looking back one last time at my town, a little place in the wilderness that had grown up with me—I longed to stay in the home where I gave birth to all my children, the location of my loves and of my losses.

This is the best place to begin recounting the story of how I played a part in the transition from Dutch New Amsterdam to English New York, my dear granddaughter.

I suppose the English will have their own tales to tell about the events that transpired but I want you to know my personal and secret version of the history of my beloved city before I am gone.

Having left New Amsterdam for the first time on that cold winter day in 1664, I felt unsettled, not quite believing that the time for my departure had finally come. Where had the time gone? How quickly had it passed? It had been nearly forty years since I first set foot on the shores of Manhattan with my mother, father, and little brother.

The view from our vessel, The Morning Star, was unrecognizable from the one my family saw many decades earlier. We had arrived to nothing but marsh, forest, and a few Indian canoes that approached our ship in greeting and curiosity. It’s easy to recall my excitement as a young girl of flowing dark hair seeing the Natives for the first time when we reached these shores many years ago.

But at the point of my expulsion, I wasn’t an adventurous, naïve child anymore. A mature and defiant woman who had faced her share of hardship and disappointment had taken her place. The Council of New Netherland and Director General Stuyvesant had told me they were finished with my repeated offenses and had given the order for banishment. I’d been in trouble with the authorities far too often they said. They’d insisted that my tavern be closed.

“So this is how it must end,” I uttered in disbelief to my son Pierre, your uncle, as we huddled together on deck. 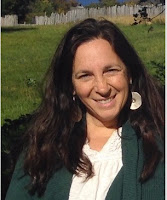 Award-winning author, Beth M. Caruso, is passionate to discover and convey important and interesting stories of women from earlier times. She recently won the literary prize in Genre Fiction (2020) from IPNE (Independent Publishers of New England) for her most recent novel The Salty Rose: Alchemists, Witches & A Tapper In New Amsterdam (2019). The Salty Rose is Beth’s second historical novel and explores alchemy in early colonial times, an insider’s view of the takeover of the Dutch colony of New Netherland, and the Hartford Witch Panic with information she gathered from previous and ongoing research. Beth’s first historical novel is One of Windsor: The Untold Story of America’s First Witch Hanging (2015), a novel that tells the tale of Alice ‘Alse’ Young and the beginnings of the colonial witch trials. She based the story on original research she did by exploring early primary sources such as early Windsor land records, vital statistics, and other documents. She lives in Connecticut with her family. Beth kayaks and gardens to unwind.