Best of the Bruins

This post is part of a virtual book tour organized by Goddess Fish Promotions.  Jonathan Weeks will be awarding a $25 Amazon/BN GC to a randomly drawn winner via rafflecopter during the tour. 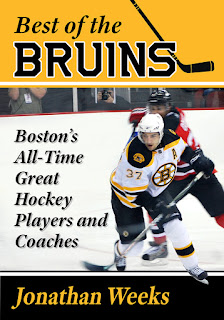 Among the “original six” NHL clubs to survive the Great Depression, the Boston Bruins have a vibrant history. Entering the 2020-’21 campaign, the team ranked fourth all-time with six Stanley Cup championships. Some of the most gifted players in NHL history have skated for the Bruins over the years. Best of the Bruins: Boston’s All-Time Great Players and Coaches tells the individual stories of the players and coaches who have helped make the Bruins perennial contenders for close to a century. Profiles of current players are included in this sweeping survey.read an excerpt...

Orr did not invent the archetype of the offensive defenseman, but he elevated it to a new level. A masterful skater with unparalleled acceleration, he knew where the puck was at all times and could almost always be found carrying it, pursuing it or redirecting it. Teammate Phil Esposito recalled a game in which the B’s were on a penalty kill against the Oakland Seals. Orr took the puck behind the Bruins net and lost a glove in a scuffle with an opponent. Retaining possession of the puck, he skated over the blue line then back into the Bruins zone, where he picked up his glove and killed off a full minute of the penalty. Concluding one of the most astounding sequences Esposito had ever seen, Orr glided into the offensive zone and scored a short-handed goal.

Though Orr’s detractors claimed that he was soft on defense, others begged to differ. B’s goalie Eddie Johnston, who played with Orr for several seasons, remarked: “They say Bobby doesn’t play defense. Heck, he makes a forty-minute hockey game for us. He’s got the puck twenty minutes by himself. What better defense is there?” On a similar note, coach Harry Sinden crowed: “You can have all the Bobby Clarkes of the world. I’ll take one game from Orr. He’ll make thirty moves no one has seen before.”

Orr established himself as a cultural icon in the same manner as Joe DiMaggio. More than just a player—he became a hero to the New England masses and a legend to hockey fans outside his primary fan base. His greatest seasons were packed into a relatively short span, but his star burned brightly long after he retired as a player.  To the present day, he receives resounding ovations at every public event he takes part in. Interestingly, Orr never basked in the spotlight during his playing days. After Bruins victories, he would often hide in the trainer’s room and avoid reporters so that his teammates could receive credit. 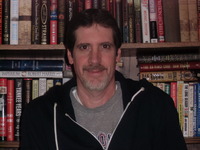 A lifelong sports fan, Weeks has published several non-fiction books on the topic of baseball. Additionally, he has two novels to his credit--one of them a posthumous collaboration with his father. His latest project: Best of the Bruins: Boston's All Time Great Players and Coaches, is due out in 2021.

While growing up in the Capital District region of New York State, I had a close relationship with my father. He brought me to sporting events all the time. Some of my fondest memories are of the trips we took to Yankee Stadium. We also went to a lot of hockey games. I have remained a lifelong fan of both baseball and hockey. Though most of my books are about baseball, I have always wanted to write about my favorite hockey team—the Boston Bruins. The book was a bucket list item for me.

Prior to completing Best of the Bruins, I had never written about hockey before. I was intimately familiar with the sport and the team, but soon discovered that hockey writing is a lot different from baseball writing. I had to read a lot of books and articles to get the hang of it. It felt a little awkward at first, but I got pretty comfortable after I had written forty or fifty pages. I’m pleased with the end result. I’ll definitely revisit the topic at some point in the future.

No. In addition to a number of sports biographies, I have published two novels. One of them—a posthumous collaboration with my father—is a mystery/ thriller entitled Scarecrow on the Marsh. That was one of the most challenging books I have ever written on multiple levels. My father had passed away, leaving behind an early draft that needed a lot of work. The book had meant so much to him and I felt compelled to finish it to honor his memory. I was grieving when I wrote it and he wasn’t around to explain the storyline to me. Furthermore, I had never written a mystery novel before and wasn’t familiar with the conventions. It was a grueling experience, but well worth the effort. I donated most of the royalties to my father’s favorite charity.

Hmmm....I would love to tell you that my inner sanctum offers a panoramic view of the ocean or a majestic mountain range, but that isn’t the case. I live in northern New York near the Canadian border. My office window faces a small backyard bordered by tall hedges. There’s a trampoline in the yard that has fallen into disuse. My two daughters used to jump on it all the time. I miss them shouting to me across the yard: “Hey—Dad, watch me do a flip!” It’s much quieter around here now that they are older, but I can still hear the sound of their laughter in my mind.

I was enthralled with books before I learned to read. My first comprehensive non-fiction work was a third grade report about the Great Pyramid in Egypt. I was an avid fan of sports growing up—specifically baseball, hockey, football, and basketball (listed in order of preference). Before every season, I would write up a preview including predictions on how every team would fare in the coming year. I did it just for the fun of it. It seems fitting that I became a sportswriter as an adult.

Good Morning! Thanks for hosting my tour! I will be checking back in to answer any questions or comments later in the day.

It's my pleasure. You're welcome.

It was a pleasure having you here. Best of luck with your book.