This post is part of a virtual book tour organized by Goddess Fish Promotions.  Claudia Riess will be awarding a $50 Amazon/BN GC to a randomly drawn winner via rafflecopter during the tour. 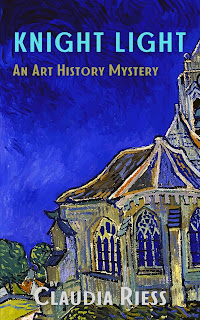 On March 24, 1946, World Chess Champion, Alexander Alekhine, is found dead in his hotel room in Estoril, Portugal.  The cause of death remains mired in controversy when, three-quarters of a century later, a letter of his that could rock the art world is unearthed in a routine home renovation in upstate New York.  The letter is addressed to a person of international repute and offers information about art works looted during the German occupation of Paris.
When the young man in possession of the letter is brutally murdered, his mentor, art history professor Harrison Wheatley and Harrison’s sleuthing partner, art magazine editor Erika Shawn, hurl themselves into the dual mission of tracking down both the killer and the looted art.
The hunt takes the couple to far flung locations, and as the stakes rise along with the murder count, it looks like the denouement will take place far from the comforts of home.

This was a good mystery and the information and discussions about various art made it even better. I liked the Wheatley’s and their “peripheral friends”.. The author did a great job of giving us a picture of all of them. It did seem to me that some of the conversations between the Wheatley’s didn’t fit in the flow of the reading. Maybe it was more that they were out of place.

Nonetheless, there was lots of action and as I said, really well-defined characters. A good story.

Harrison was at a loss.  “Denise, what is so disturbing to you about this?”

She opened her mouth to answer, then changed her mind.  After a beat, she said, “I’ll tell you what happened next, and you will know for yourself.”

He had no choice.  He nodded and waited for her to continue.

She smoothed her skirt and refolded her hands, as if this would bring order to what was to come.  “The next morning after breakfast—dry rolls and tea without sugar, it was—Ben and I set out for our respective homes.”  Her voice had cracked a bit, and she cleared her throat.   “Ever since the incident at the cinema, Benny was keeping his distance from me.  It was clear he was unsure how to act in my presence.  I wanted us to go back to the way we were, so I turned around and caught up with him.  ‘I’ll walk you home,’ I said.  ‘I’m perfectly capable of walking by myself,’ he said.  I walked with him anyway.  I hardly knew what to say next, and he was of no help, giving me the cold shoulder, so we walked down the street in silence for the entire ten minutes it took us to get to number 110, the address of the Eisenberg gallery and residence.  You should know that the Eisenberg’s apartment, like the Wildenstein’s, was accessible from inside the building.  The apartment was not as grand as theirs, though.  Three rooms, three flights up.”  Madame D paused to take another of her curative deep breaths.

“I will get right to the point,” she said evenly, although Harrison saw her hands briefly unclasp to take up a patch of skirt material and clutch it between her palms.  “The door to the gallery was wide open, but we didn’t need that clue to realize that something terrible had happened.  We could see it through the gallery window.  Ben let out a low grunt, like an animal that had just been wounded, and ran into the building.  I followed after him.

“The floor was strewn with empty frames, like a heap of firewood.  Not a single canvas had been left behind.  I stood dumbly in the center of it as Ben tore around in circles screaming ‘Maman? Papa? Maman? Papa?’ before realizing he was going nowhere and shot out of orbit to head for the back office.  I followed behind in a kind of wide-awake daze, and when I reached the room, I saw first a neat pile of paperwork on a small desk, and then, beside it on the floor, the bodies of two German officers piled together like discarded rag dolls.  Ben was crammed in a corner as if pinned there by an invisible force, his mouth open, screaming without making a sound.  And then, as if suddenly released, he sprang out the door, brushing by me without seeing me, running and stumbling toward the stairwell that led up to the apartment.  I followed him like a sleepwalker, alert to every detail, but viewing it from another dimension of time and space.

“I was standing behind him as he pushed open the door to the apartment, and so my first view of the scene was obstructed.  His was not.  Both his parents were lying face-up on the hardwood floor.  Each had been shot in the middle of the forehead.  Except for the neat bullet holes, their faces were remarkably intact.  The pools of blood, like crimson pillows beneath their heads, were proof enough that their wounds had been fatal, but Ben, dropping to his knees beside his mother’s inert form, refused to believe it, whispering and howling that she wake up.  And still, not a word had passed between us.  What happened next was so unearthly, even more so than the murders, that I did not truly believe it was happening until it was done.”

Madame D paused a moment before going on, and Harrison felt that if he said a word it would be considered an act of transgression.  “The window in the living room,” she continued—“we were in the living room, you see—went nearly from the floor to the ceiling.  The window was open and the long white curtains—cotton batiste they must have been—were fluttering in the breeze.  Maybe Ben saw them as angel wings, I don’t know.  Maybe he thought he could fly—remember, he believed he could become anything he wanted to be—and that the curtains were heavenly portals or something of the sort.  It’s so painful not to know what he was thinking when he rose to his feet and without a word, without a cry, ran to the window and flew off.  In my mind I hear myself shouting ‘Ben, no!’ just as he is about to jump, so I must have shouted, don’t you think?”  She looked at Harrison, actually wanting him to answer.

Harrison felt keenly aware of what he had just been hearing, yet stunned speechless by it.  Like the young Denise, he reflected.

He must choose his words carefully—no! say what you think!  “Yes, I believe you did,” he said, faltering.  “Probably you did.”  Counterpunching in the forefront of consciousness: What? Two German officers and two Jews killed by the same person?

“In the end I know it doesn’t matter,” she said, “but I want to believe I said something.”

She granted him a smile, but her thoughts were elsewhere: “I blame myself, you know,” she said quietly.  “If I had let Ben hold my hand in the theater, or if I had pulled my hand away less forcefully, he might have rushed to me, if even for a parting embrace, and I would have held onto him until that dreadful impulse had melted into a river of tears.” 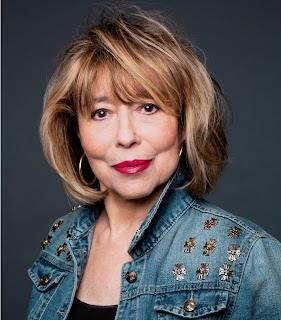 Claudia Riess is a Vassar graduate who's worked in the editorial departments of The New Yorker and Holt, Rinehart and Winston.  She is author of the Art History Mystery Series published by Level Best Books and includes: “Stolen Light,”* “False Light” and “Knight Light.” She is also author of “Semblance of Guilt” and “Love and Other Hazards.”