This post is part of a virtual book tour organized by Goddess Fish Promotions. Geoffrey Saign will be awarding a $30 Amazon/BN GC to a randomly drawn winner via rafflecopter during the tour.
See below or Click on "read more" to sign up for the Giveaway. 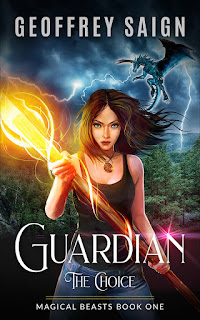 Samantha and Jake fight to save their poisoned parents, and instead find themselves in a battle to save the parallel magical world of KiraKu. The two teens discover they must defeat the Evil One—a diabolical master of deception—or their own world will fall too. Samantha must master the mysterious supernatural staff, WhipEye, and find out if she has what it takes to fulfill the prophecy of the true guardian. In a final battle, reminiscent of Lord of the Rings, the two teens will have to risk everything, or lose it all. For Fans of Fantastic Beasts, Percy Jackson, Harry Potter, The Hobbit, and Lord of the Rings.

~ Magical Beasts is now in development for a major motion picture. ~

A black belt in kung fu, Jake kicks at the woman’s side. She blocks his foot with her forearm. He slides in and chops at her neck.

With little effort she absorbs the hand blow with her arm, grabs his forearm, and jerks him down on top of me. Kneeling on his back, she keeps us immobile.

Her arm is already healing from Biggie’s whip, so like the hyena she’s a Lesser or Great One too. Originals don’t heal like that. That also explains her speed and strength. She and the hyena have to be working for Gorgon.

My vision blurs. I’m suffocating. From ground level I glimpse Biggie shoving the hyena sideways into a tree.

From behind her, the woman pulls out a thick silver band and slaps it onto Jake’s left wrist. She leans over him to stare at me, her slender face hard. “If you don’t find and deliver Drasine to the smugglers by tomorrow night, the silver band will explode and kill your boyfriend. Go to the Smuggler’s Oasis. Kert will tell you what to do.”

Stunned, now I know she’s working with Gorgon. “Forget you.” I punch at her face, but she grabs my wrist. Her eyes harden, and then she looks up.

Somehow the hyena got past Uncle Biggie and it’s charging us. The animal must be working with the woman. Her ride out of here.

The woman releases my wrist.

I croak, “You can’t do this.” I grab at her but her head is rising and my fingers curl around her swinging gold necklace. It breaks off in my hand as she morphs into a huge cheetah. 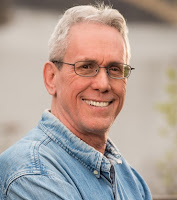 Geoffrey Saign’s love of wildlife led him to write the award-winning fantasy series, Magical Beasts. He often experiences the magic of nature and wildlife while hiking and swimming. He has a degree in biology and has assisted in field research on hummingbirds and humpback whales. Geoff loves to sail big boats, hike, and cook—and he infuses all of his writing with his passion for nature. As a swimmer he considers himself fortunate to live in the Land of 10,000 Lakes, Minnesota. See what he’s up to at https://geoffreysaign.net/magical-beasts

Magical Beasts was one of my favorite series to write, because of the themes and background. The main character is in love with wildlife, and an expert, and the magical beasts are often ‘normal looking’ wildlife. That gave me endless opportunities to put wildlife into the book without making it preachy or a bore. Magical Beasts also gives a reasonable, fictional rationale for all creatures in human mythology. Both types of creatures, wildlife and mythological, provided many opportunities for my imagination to draw from. Also, because mythology is often based on bits and pieces of truth (such as manatees being called mermaids), I was free to create creatures that resembled mythological creatures, but sometimes with a twist. I could also create the backstory of mythological creatures.

Because of my own interest in wildlife, and mythological creatures, it was a pleasure to combine the two in this series. The theme, a choice to either save the world or pursue your personal wants and desires, has never seemed more relevant than today. Nature and wildlife are under so much pressure, and I want people to care about the beauty we have here, and to preserve it. I dedicated the 4 books to relatives, family members, and friends that helped me along the way.

I have a general idea of the character and story arcs, but the plot unfolds as I write it. I tend to not use outlines. I generally put the character through the hero’s journey, and usually use pacing, suspense, and mystery that you would find in a thriller.

In Book 1’s beginning chapters I asked others for help to get Sam and Jake’s dialogue right, to make it feel real, interesting, and at times humorous. After that I kind of had a feel for it and just went with it. Once I had the story arc in my head, I filled in the rest of it as I went along. All the Magical Beasts books were a thrill to write, and book 4 was one of my all-time favorite books.

I also write thrillers (Jason Bourne/Jack Reacher genre), and nonfiction (SMILE MORE STRESS LESS). I’m 100% invested in everything I write and enjoy all of it.

Right now I’m writing the pitch bible of Magical Beasts for my producer, and I’m very excited about moving this series to the big screen. I have to edit my 4th Jack Steel book, and then most likely edit my other YA fantasy series which will soon be under a movie contract too.

I write in a living room. Big windows, lots of light, quiet. I have no interest writing elsewhere. 27” screen atop a desk. My desk gets sloppy while I work on a project, with a lot of notes. When I finish, I clean everything up so it’s ready for the next project.

In high school my creative writing teacher, Mrs. Stifter, said, “A writer like this comes around once every 17 years.” That gave me confidence to keep writing.