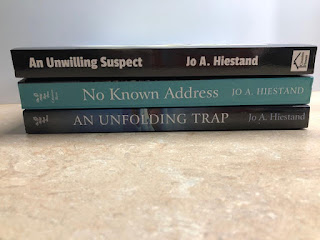 Jo Hiestand has several audiobooks available. She has one and (another coming soon) in her Linn House series. There are 7 books published in the McLaren series. But in 2020 she came across a narrator that seemed to immediately be an almost perfect fit for her series featuring Michael McLaren (the McLaren series).  In listening you’ll see he seems to fall right into that British lilt and yet his voice seems to capture that moody, strong, and yet caring excop that I fell in love with in Book 1, Cold Revenge.

Now Callum Hale has 3 of Jo’s 12 book series narrated: Unfolding Trap, No Known Address, and the newest one, An Unwilling Suspect.

Here, on Our Town Book Reviews we hope to give you just a small taste of what you are missing if you don’t jump in and read or listen to these books.

Speaking of getting a taste...here's a snippet of Callum narrating Jo's newest audiobook, https://adbl.co/3y5lDDp 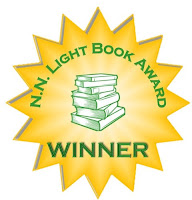 Jo Hiestand is the author of the McLaren Series and a 2 time winner of N.N. Light's prestigious Book Awards....

Read about Jo and the research she does in her writing: HERE

Here's a little from Callum Hale about his background... 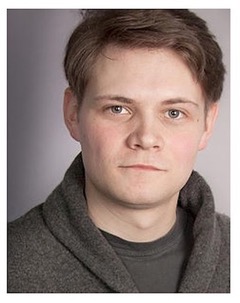 I trained as an actor at the East 15 School of Acting, based on the principles of Joan Littewoods Theatre Workshop. I knew from fairly early on that I wanted to be an actor, pretty much ever since I realised that playing make-believe could actually be a career. I’ve been telling stories my entire life, and when as a child I was given a Dictaphone I would record books for me and my siblings to listen to, so you could say I’ve been narrating audiobooks for a very, VERY long time.

I remember particularly recording a number of short stories from a magazine my Scottish Grandmother used to share with us. One was about a Clooty Dumpling that got into a scrape with a  spider in a cave. I read the entire thing in a Scottish accent; which you can hear me doing plenty of in another McLaren audiobook; ‘An Unfolding Trap’. 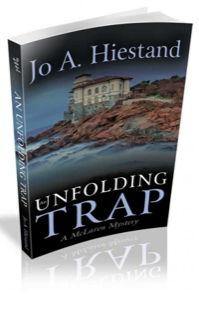 My Mother’s family are from the Yorkshire and Cheshire regions of England, not far from where McLaren and his friend Jamie call home, so I was drawn not only to those characters, and the sounds of those voices, but also to the landscapes, which Jo makes just as important a character in her books.

I find it a real joy to sit in my little corner, behind the microphone, and step into the world of the book I’m narrating. Just as you would when reading alone for pleasure; I can see the hills in my minds eye, I feel the emotion of McLaren; I let the words effect me and, hopefully, effect my delivery so that the listener has the same engagement as they would reading the words themselves. To my mind narrating is acting, and acting is telling stories, and I’ve been doing that all my life.


Some questions we asked Callum

How do you prepare for a new audiobook narration?

The first step is to make sure that the author, or the rights holder, is happy with the main character voices. So, I’ll liaise with them over that and send a recording of the first chapter, to make sure the tone of the narration is right as well. You don’t want to be reading a gritty murder mystery like it’s a kids nursery rhyme book! Personally, I don’t like to mark up the manuscript ahead of recording, I prefer to feel what’s right whilst I record... this sometimes means more editing for me later, but, for me, I think I give a better performance this way.

What if it requires different character accents, like Scottish or Welsh? How do you know your accent is correct?

Thankfully, with most British accents, I’m fairly well practiced already; certainly to differentiate between characters. If I know something needs to be very specific and I’m unsure I turn to that wonderful research tool- YouTube. There’s bound to be a video of someone talking in the accent you need to hear. I’m pretty good at picking up the music of accents quite quickly. There are times, as with ‘An Unwilling Suspect’ where a character may have a slightly more obscure accent. There aren’t too many Yorkshire born, French-speaking Swiss citizens that have returned to their home country... so I did what research I could and just took a leap of faith! I hope not to have offended any Yorkshire born, French-speaking Swiss citizens...

What if you have a sore throat, what happens if you're interrupted during your narration, or better yet, do you have a funny story about a coughing fit, your dog barking during the recording of an emotional scene, etc…

If I have a sore throat, the answer is very straightforward and boring... I don’t record! It can be very frustrating, especially when you start recording and realise; ‘No... I can’t do this today’. It feels like you’re giving up, but at the end of the day, you just have to stop, walk away and give the pipes a rest. After all, a painter could have all the inspiration in the world but if they don’t have any paints; they’re pretty much scuppered.

Thankfully, I’m not often interrupted in my home studio. Occasionally, though,  there’s a loud knock at the front door, and it’salways when you’re right in the middle of a deeply emotional moment... and some colourful language usually follows... which I edit out later. In fact, all the times I talk to myself, while the mic is still recording, could be edited together to make a full length audiobook of it’s own; but those conversations will never see the light of day... or reach the ear of the public, at any rate.