This post is part of a virtual book tour organized by Goddess Fish Promotions. Mark Aaron Alvarez II will be awarding a $15 Amazon or B/N GC to a randomly drawn winner via rafflecopter during the tour. Click on the tour banner to see the other stops on the tour. 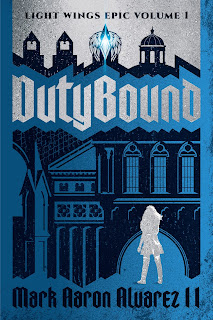 The world was their creation until they sought to destroy it.

Dutybound is the story of Terestria and its Virtues, heirs of nobility forced to face the Sins of their forefathers and bring their world from the brink of Darkness. Among them is Lucia Sanoon, High Maiden to the province of Moz and chosen of the Light Wings. The ancient relic, bestowed upon a long-forgotten civilization by the Light itself, was forged to harbor the Light's essence if ever Terestria's balance were threatened by the Darkness' desire to corrupt the Light's most-prized creation, Life. If successful and the long-standing covenant between the Light and its Protectors were ever to be broken, the Darkness would be free to roam Terestria and reclaim the land it had a hand in creating, bringing death and destruction to every corner of the world.

But as long as there is Light, there is hope. With the help of the Light Wings and its power, Lucia must heed its call to assemble the Light's Virtues and lead them into battle against the very Sins that seek to destroy their world. But finding the four will not be easy, for much of the knowledge is lost and the understanding of one's own morality is the only key to unlocking the power each of them holds within.

A story of faith and morality, Dutybound will lead you through a journey of self-discovery as our heroes face conflict from outside and within themselves. Duty, desire, envy, hope, hate, love, pride, and temperance all are challenged within this series in an epic tale that is sure to have you pondering your own true nature.

Ara grasped her blouse. This deepening wound tore at her chest, as though she knew this whole time that it would be here that her heart would break.

“Lady Ara,” called her loyal maid, Amelia, so struck with concern that the wrinkles in her forehead seemed to suddenly age her ten years. In her eyes was a clinging intuition.

Ara sensed her concern, as if the maid already knew, but spoke anyway. “He’s gone.”

“The master?” asked the maid.

“My lady,” Amelia said with grief before bringing her eyes back to Ara.

There was then a lull as they both thought. The maid’s stare grew distant as Ara let out a faint whimper, breaking the still silence.

Finally, Amelia asked, “May I ask why the master left?”

Ara’s insides shuddered. “He fears of . . .” She hesitated, looking at the letter, fully dazed, unable to grasp the idea of its true meaning. It was as if something hid beneath his words, something he was not telling her. Memories flashed through her mind, and her chest tightened. It couldn’t have returned. It was her prayers that had saved them. It was her strength, her power that had defeated it in the first place. Could it still exist somewhere, outside the reach of man? “He fears of its return.” She felt the warmth of her tears beneath her eyes once more, while the maid’s face paled, her own fears apparent in this revelation. The war was supposed to be over.

Amelia wanted to release tears of her own. But still, she held an unchanging sternness of stone, something unbreakable, showing a strong sense of obligation and duty, no matter the adversity. She had to be strong for the lady even though she could not be strong for herself. “Lady Ara, I’m terribly sorry. Lucia . . .” Her concern for the child shone within the sparkles of her green eyes as she uttered her name. “Should I go to her?”

Ara looked up at her, her amber eyes still wet with tears. Despite the circumstances, she released a slight smile, remembering her daughter. “Yes, please. Thank you.”

About the Author: Mark A. Alvarez II is a Hispanic-American born in Houston, Texas. He’s a graduate of Texas State University, where he studied public relations and mass communication. He was an apprentice at the NEW Apprenticeship where he was certified in digital marketing. He is the CEO of Light Wings Promotions LLC, a digital marketing and creative branding agency in San Antonio, Texas, where Mark currently resides.