The Order of Time

This post is part of a virtual book tour organized by Goddess Fish Promotions. Scott P. Southall will be awarding a $50 Amazon or B/N GC to a randomly drawn winner via rafflecopter during the tour.

Picture two twelve-year-old fraternal twins who are like night and day. She is a smart and highly organised MMA fighter. He’s not a fighter, he’s a lover of history, art and Star Wars. Despite their differences they are one formidable team. Together Anastasia and Edward Upston travel through time and navigate ancient civilisations, angry gods and mythical monsters in their quest to protect the integrity of human history.

About The Order of Time

Anastasia and Edward Upston are eleven year old twins who are different in almost every way. Despite this they are inseparable and he best of friends. They tackle the highs and lows of sixth grade together whether they are fending off bullies at the elite Blake Academy or examining rare antiquities at the Smithsonian Museum of Natural History. Then: life gets complicated.

They discover that their friend and mentor, Dr. Gregorian, is part of a secret society called the Order of Time. It turns out that time is not fixed, it’s a fluid continuum where changes to the past can create ripples all the way through to the present. It unwittingly falls to the twins to travel back through time to ancient Egypt where they must overcome deadly assassins, evil high priests and vengeful gods in order to prevent disaster. Together Anastasia and Edward must navigate all obstacles to preserve the past and find their way back home.

About The Order of Time and Odin’s Door The orange light bathed the snow-covered fields as the fiery globe began to dip below the horizon. It was strange that something so beautiful could signal the arrival of something so evil. One thing twelve-year-old twins Anastasia and Edward Upston knew for sure was that when mortals were caught between two bickering gods nothing good would come of it. Surviving the Viking Age may be the hardest thing they ever do, if they can… 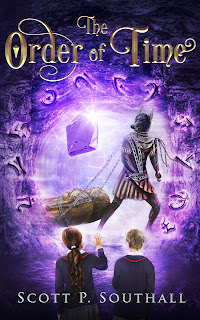 read an excerpt from The Order of Time...

They started to leave when the room suddenly lit up with a strange purple light coming from under a closet door.

“Why is the closet glowing?” asked Edward, his voice trailing up an octave. “Maybe we should get out of here.”

“What if Dr. G’s in there? You know he always locks his door, but it was open tonight. Maybe he’s still here. He might need our help,” Anastasia said emphatically.

The light was getting brighter by the second. Now Edward could also hear a low humming noise.

“Stop being crazy, Anastasia! This is the part in the movies where you yell at the screen for the characters not to open the door. We are not going to open that door.”

“I’m not being crazy. If Dr. G is in there and needs help, we’ll never forgive ourselves.”

Edward looked at her pleadingly, but she wasn’t giving in. His shoulders slumped in defeat. Oh god, please don’t let there be a monster or anything really scary in there. Anastasia dragged him over to the closet door. The light pouring out around the cracks was incredibly bright and the humming was getting louder. She gripped the large, brass doorknob, took a breath, and opened the door. 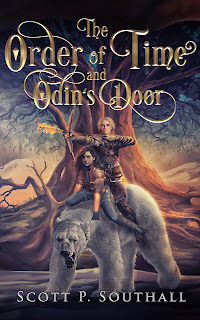 read an excerpt from The Order of Time and Odin's Door...

Anastasia looked up; a cloud of fog was completely enveloping the ship. She tried in vain to see what lay ahead of them but the damp, gray blanket made it nearly impossible. As she strained her senses and peered into the swirling mist Anastasia noticed they weren’t moving and that the boat had stopped rocking. The wind had dropped and the sea had gone completely still. Then she heard a swishing noise, like something was moving through the water near them.

“There’s something under the boat! It looked like a snake,” Edward shrieked as he recoiled from where he’d been hanging his head over the side of the ship, feeding the fish his lunch. His face had lost its green tinge and was now white as a sheet.

The Viking warriors snatched their shields from their mounts on the boat’s gunwales and drew their weapons. The swishing noises continued, their origin hidden within the gray shroud surrounding the unmoving ship. The tension and fear were unbearable. Anastasia could feel her heart racing as the adrenalin surged through her body. She fought the urge to scream. Then she did scream—she screamed like she had never screamed before! 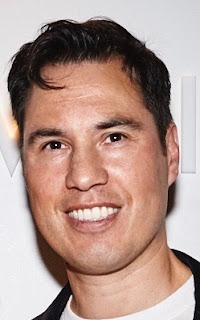 Scott is an American author and banking executive who lives in Sydney, Australia. He grew up in the suburbs of Washington D.C. and attended Georgetown University. While he loves his job as a global banker, his true passion is making up stories with his children. His debut novel, The Order of Time, reached #1 in its category on Amazon and was the 2021 Reader’s Favorite Gold Medal Winner in the Children’s – Mythology/Fairy Tale genre.

Scott, I enjoyed the excerpt and The Order of Time sounds like great reads for my nieces and nephews, and me! Thanks for sharing it with me and have a wonderful weekend!