Linda Griffin will be awarding a $25 Amazon/BN GC to a randomly drawn winner via rafflecopter during the tour. 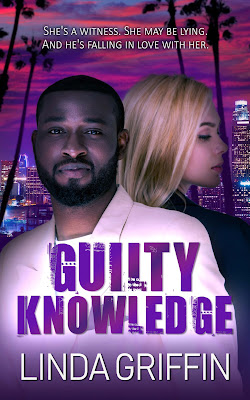 He's a witness. She may be lying. And he's falling in love with her.

Detectives Jesse Aaron and Camille Farris have no leads in the murder of Rosa Logan when pretty blonde Sariah Brennan claims to have seen the killer—in a vision. Unfortunately the man she identifies is dead—or is he?

Sariah is an unsophisticated small town girl, but her background and her motives are mysterious. Jesse is increasingly convinced that she has guilty knowledge of the crime, even as he finds himself more and more attracted to her. Can he and Camille unravel the web of secrets before the killer strikes again?

Really enjoyed this mystery or  suspense. I’m not actually sure which genre I would call it. I think I identified with it because I am the same person that would not believe someone had visions and yet would wonder how said occurrences happened. It sort of leaves you sitting on the edge of your seat but that might be because of the tension Griffin creates in her writing.

This has good characters. Both cops were great as partners and yet had their own personalities that clashed now and then. That only added to the story. I think the word “story” is what’s important in this review. This is really a good story. The kind that are very hard to put down. I didn’t put it down much.

The other aspect to my liking is that while this does have some romance in it, the amount was small. Romance is not my genre and I have sometimes gotten into something I liked and then been turned off by the content. That was not true here at all. Romance is not the part of the story line that makes this such a good book. Romance is just an enhancement to a good book.

It looks to me as if this is Linda Griffin’s latest publication. She does have others published though. Check them out.

“But it came to you that she was killed by a man with a scar on his neck?” He still had a nagging feeling that she knew something, but surely this wasn’t how.

“Yes. I know how it sounds, but I had to tell you, because there’s another one. If you don’t stop him, he’ll kill her too.”

“What are you going to do—to find him?”

He gave her the standard answer: “We’re following up a lot of leads,” and added, “I’ll run this description through the local and NCIC databases and ask her associates if they recognize it.” He picked up his pen again. “Can you describe the scar?”

“A red mark about an inch high.” She touched the left side of her neck. “Here. It was like a C, a backwards C.”

Jesse wrote that down. “Okay. Thanks.” He handed her a card from the holder on the desk. “If you think of anything else, you can call me.” He meant it as a dismissal, but she didn’t leave.

“He…He took one of her fingers in his mouth. After she was dead.”

The hair on the back of his neck prickled, but he remained expressionless. “In his mouth? Which finger?”

“Were you there?” She must have been. Unless she had a source inside the investigation, in which case someone should be fired, she was an eyewitness. How else could she have known Rosa Logan’s ring finger had teeth marks on it?

I was born and raised in San Diego, California and earned a BA in English from San Diego State University and an MLS from UCLA. I began my career as a reference and collection development librarian in the Art and Music Section of the San Diego Public Library and then transferred to the Literature and Languages Section, where I had the pleasure of managing the Central Library’s Fiction collection. Although I also enjoy reading biography, memoir, and history, fiction remains my first love. In addition to the three R’s—reading, writing, and research—I enjoy Scrabble, movies, and travel.

My earliest ambition was to be a “book maker” and I wrote my first story, “Judy and the Fairies,” with a plot stolen from a comic book, at the age of six. I broke into print in college with a story in the San Diego State University literary journal, The Phoenix, but most of my magazine publications came after I left the library to spend more time on my writing

My stories, in every length from short shorts to novellas, have been published in numerous journals, including Eclectica, The Binnacle, The Nassau Review, Orbis, and Thema Literary Journal. Guilty Knowledge is my third novel from The Wild Rose Press. Seventeen Days was published in 2018 and The Rebound Effect in 2019.