Back to the Beginning

This post is part of a virtual book tour organized by Goddess Fish Promotions. Christina Ann Gist will be awarding a $10 Amazon or B/N GC to a randomly drawn winner via rafflecopter during the tour. Click on the tour banner to see the other stops on the tour. 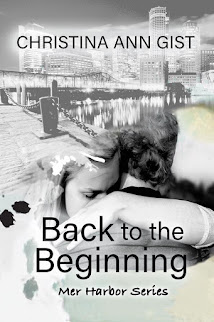 Mer Harbor is a small, coastal town in Southern California. Everyone knows everyone, and nothing is a secret among Mer Harbor residents. Some hope to escape someday, while others find the charm of the town enticing, and never leave.Everley Romero and Heath Mitchell had always planned to take on the world together. To leave Mer Harbor and pursue their dreams. It all seems to crumble when a tragic loss sends them in different directions. Almost ten years later, Everley finds herself on the receiving end of a bitter divorce, leaving her no choice to return to the home - and past - she'd hoped to leave behind for good. Heath is building a good life for himself in Mer Harbor. When he crosses paths with Everley, he learns that they'll both have to face a past full of heartbreak and loss that they've both tried to bury.

This is a sweet book. It’s a romance of long-ago sweethearts having left each other and one of them running away to get away. Now they are both in the same town and trying to live as though they have their own new lives which they do...sort of...

As I said this is a romance. Not particularly mt favorite genre but it’s sweet and it has a true storyline. I suppose what I’m trying to say is that it isn’t what I’d call a mass market style romance.

Read the Excerpt
Life was a disaster. And not one of those beautiful disasters women were so fond of in those cheesy, made-for-tv movies. No, Everley Romero’s life was falling apart in the worst, and ugliest way possible.

How had things gone so very wrong in so little time?

She wanted to blame Benny, her soon-to-be ex-husband. The ink had hardly dried on their marriage certificate when she filed for divorce. She wished it was the only time she’d wasted in her life. As she fiddled with the phone, still debating making the phone call, she allowed her mind to drift over the almost ten years she and Benny had spent together.

Getting married had been a terrible idea.

Choosing Benjamin Masters as a husband was an even worse one as she was now finding out.

Everley wasn’t fond of whispers, and when word got out that her husband had cheated on her, the news ran rampant. It was the sort of thing you’d expect in a small town like Mer Harbor, but they lived in Manhattan. The fact that anyone outside of her closest colleagues kept tabs on her life was a shock she hadn’t prepared for.

In reality, she knew long before the rumors started. She’d even tried to fix things at one point, but it was no use. Now, the sympathetic looks she got every time she showed up at work made her want to hide under her desk. Gossip always disgusted her, and when she was the subject, it made her stomach turn.

Telling stories before she could even write, Christina grew up knowing she wanted to be an author. She “published” her first stories with construction paper and handwritten pages for her family and friends. Now, with the magic of technology, she’s able to share her characters and stories with the world.

When she’s not writing, you can find her dabbling in her other favorite hobbies such as photography, stargazing, and of course: looking for her next adventure.