Carolyn Arnold will be awarding a $10 Amazon/BN GC to a randomly drawn winner via rafflecopter during the tour. 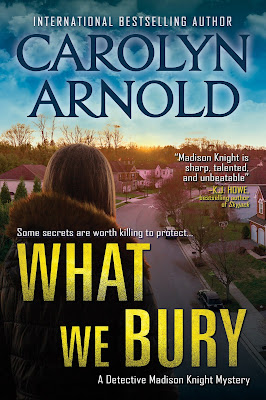 She’s dying, and she knows it. If only she can stay alive long enough to leave one last message. As the rain beats against the metal roof, she uses her blood-soaked fingertip to scrawl on the floorboards... The letters GB.

Detective Madison Knight has been house hunting, but a call from her real estate agent has nothing to do with finding the perfect property. She’s found a woman’s body, stabbed multiple times. Madison arrives on scene and is presented with an unknown Jane Doe and two letters written in blood. There’s no murder weapon, and it seems Doe was attacked somewhere else.

As Madison works to find justice for the victim, Madison’s own life is put at risk. What she comes to discover is some people will go to extreme lengths to protect their secrets—even as far as murder. But will learning that lesson come too late for her?

Buy this international bestselling book today and join the investigation! Uncover clues, follow leads, and catch a cop killer like thousands of readers have done before you...

Madison Knight is one of my favorite characters. She and her partner Terry are crafted so well you can see them as if in a television show. I’ve read several books in this series. It’s nice to move from one book to another and get to know the characters better but, I don’t think there’s any reason they can’t be read as stand-alones.

As I’ve said I like Madison Knight’s character. I also think her boyfriend adds to the stories. His swat team identity and them both being a part of the police force is nice. We don’t have to hear the usual argument between one spouse or another about being “married to the job”. Both Madison and Troy are married to the job but they aren’t married. A fact Madison is not happy with. As I said, I’ve read quite a few books in the series and this is getting a little frustrating to me. Not that I need their relationship to have a happy ending. Maybe it’s because it’s because it seems stuck.

Carolyn Arnold has several series. You won’t find any one of them with a bad review. Anything with her name on it is worth reading.

Madison cupped her eyes and squinted into the sedan’s driver’s-side window. It was immaculately kept. No dust on the dash or garbage within sight. It was possible that victim had been the type who stuffed crap under her seat, though. Madison went around the car, repeating the process. “Wow, she keeps this thing clean.”

“Not everyone treats their car like a garbage bin on four wheels.”

She’d defend herself, but he was right. She had a horrible habit of tossing trash over her shoulder into the back seat. 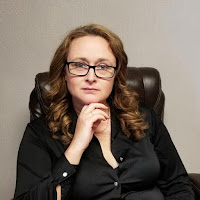 She currently lives in London, Ontario with her husband and beagles and is a member of Crime Writers of Canada and Sisters in Crime.

Pictures of the author can be found here: http://carolynarnold.net/media/