This post is part of a virtual book tour organized by Goddess Fish Promotions. David S. McCracken will be awarding a $25 Amazon/BN GC to a randomly drawn winner via rafflecopter during the tour. 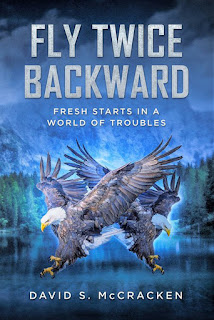 You wake back in early adolescence, adult memories intact, including ones that could make you very wealthy now. Your birth family is here, alive again, but your later families are gone, perhaps forever. What has happened, what should you do about coming problems like violence, ignorance, pollution, and global warming? You realize one key connects most, the fundamentalist strains of all the major religions, disdaining science, equality, and social welfare. You see that there are some things you can change, some you can’t, and one you don’t dare to.

Fellow idealists help you spend your growing fortune well--such as an artistic Zoroastrian prince in the Iranian oil industry, a rising officer in the Soviet army working to find a way to destroy his corrupt government, a Bahai woman struggling against Islamic brutality, a Peruvian leader working for a liberal future, and a snake-handling Christian minister, grappling with doubts, sexuality, and destiny. They are supported by an ally who develops essential psychic powers. The group faces familiar-looking corrupt politicians, religious leaders, and corporate czars, but there is an ancient force in the background, promoting greed, violence, hate, and fear.

This exciting, emotional, thoughtful, humorous, and even romantic sci-fi novel weaves progressivism, music, movies, and literature into a struggle spanning the globe. Vivid characters propel the action back up through an alternative history toward an uncertain destination. Experience the unique story and its novel telling.

When I saw the genre of this book was listed as alternative history and Sci-Fi, I must admit even though I’m a retired librarian I had never heard of alternative history. It is basically a different outcome to something that happened in history. This book most certainly fits the bill. I would also describe it as Sci-Fi and fantasy. It’s a story about something I think everyone wishes could happen. Going back in time and given a chance to make different decisions (or not) than you did the first time. Would you change the future? What would be the outcome? It’s handled with a little of everything, humor, a little romance, action, you name it.

The story  made me want to know what the author must be like. Surely a person with a vast  imagination. Speaking of vast, this was an exceptionally long book, 700+ pages. Because the POV changed from different characters this broke it up for me, but it is long.

I might add, I finished every page and would recommend it to anyone who wants to “go back in time”. Great read.

Waiting for breakfast, reading the Sunday paper at the table, I realize Mom’s not heading for the kitchen: Oh, oh! It’s church day. Mass. Fasting. Acolyting! What’m I going to do about that?

“Mom, am I supposed to serve today?”

“Well, I can’t. I have no idea how to do that anymore. I guess we need to call Padre and tell him I’m sick.”

“No, David, we’re not playing that game today!”

“Mom, I hate to say this now, but I have no choice. I don’t know how to serve, so I can’t do it, and, frankly, I’m not ever going to do it. I’m an agnostic, a Unitarian, actually.”

She’s slamming the pots I washed and put in the drainer last night as she puts them into the cabinet under the counter. “That’s ridiculous. You don’t know enough to be an agnostic.”

Fortunately, Dad has come in and heard this exchange.

“Nev, whether his story is true or not, or he knows enough or not, he has a right not to go. He was old enough to be confirmed, so he’s old enough to choose. I’ll serve in his place.”

“Lie about being sick, on Sunday?”

“Mom, it’s a temporizer. I can’t reveal to him why I’m not going to today, much less why I’ll never again do it, and I know you wouldn’t want me to be open about it. I might not even be here next Sunday.” I chuckle. “Maybe I’ll have fallen back to age four, with Dad off in the Navy!” What a sharp look I get! 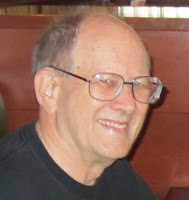 David McCracken was born in Louisville, KY, in 1940. Raised mostly in Winchester, KY, he now lives in Northern Virginia, with his third and final wife. He has three children, two stepchildren, and six grandchildren.

After three years in the U.S. Navy following a lackluster academic start, he graduated from the University of Kentucky in 1963, in Diplomacy and International Commerce. He then worked as a Latin American country desk officer in the U.S. Department of Commerce until he returned to school to earn an M.A. in Elementary Education in 1970 from Murray State University, having always been intending to teach. Eventually realizing his children qualified for reduced-price lunches based on his own teaching salary, he studied computer programming at Northern Virginia Community College and worked as a programmer until shifting back into elementary teaching.

He began working on what became Fly Twice Backward in 1983 and finally finished it in 2019! At 79, David strongly doubts he'll be doing another novel of such scope and complexity, but is preparing to work on a children's science fiction novel with a progressive bent, being a devout progressive in politics and religion, as well as a lover of learning.