Campaigning Can Be Deadly

This post is part of a virtual book tour organized by Goddess Fish Promotions. Charlotte Stuart will be awarding a $25 Amazon/BN GC to a randomly drawn winner via rafflecopter during the tour. 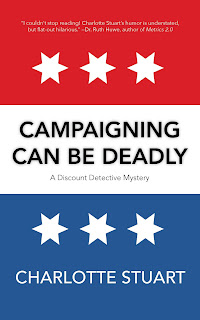 What begins as a prank ends in murder.

The campaign for the U.S. Congressional seat was referred to in the press as “Mr. Smith goes to Washington versus the carpetbagger.” The popular local candidate gets the majority of endorsements, but his opponent’s wealthy, out-of-state family is willing to do whatever it takes for him to win.

Penny-wise Investigations, a discount detective agency located in a mall, is hired to find out who is stealing the local candidate’s political signs. Two of their investigators, Cameron Chandler and Yuri Webster, not only catch the thieves in the act, they find a body next to a pile of stolen signs, proving that Campaigning Can Be Deadly...

The hardest thing about any political campaign is how to win

without proving that you are unworthy of winning. - Adlai Stevenson

Billed by the press as “the carpetbagger versus Mr. Smith goes to Washington,” the contest between the two opposing candidates for the U.S. House of Representatives demonstrated the power of money in a campaign. With huge resources behind him, the “carpetbagger” became a household name overnight by bombarding the urban Washington State district with ads and flyers attacking his opponent. “Mr. Smith,” on the other hand, already a well-known local politician who had won most of the endorsements, tried to ignore the smear campaign from his opponent by consistently focusing on policy.

As the election drew near and polls suggested the race was too close to call, the candidate who had tried so hard to remain above the fray came out with an ad aimed at discrediting his opponent for moving into the district to run for office. Immediately the press jumped on the change in tactics. They tarred both candidates with the same brush and labeled the race as one of the most negative ever run in the state. It made good headlines.

In a world filled with uncertainty and too little chocolate, Charlotte Stuart has a passion for writing lighthearted mysteries with a pinch of adventure and a dollop of humor. Her first discount detective mystery, Survival Can Be Deadly, was a Foreward INDIES finalist. Why me? Chimeras, Conundrums and Dead Goldfish was a semi-finalist for the Chanticleer Murder and Mayhem contest before it was published. She began her career in academia with a PhD in communications. Then, she and her husband decided to build a commercial boat and go fishing for salmon in Alaska. Currently she is the VP for Puget Sound Sisters in Crime and lives and writes on Vashon Island in Washington State’s Puget Sound. She spends time each day entertained by herons, seals, eagles and other wildlife.

I dedicated my book to all of the Americans who take advantage of their Constitutional right to vote in political elections. And to all of the campaign volunteers who support political candidates with their passion and hard work. Although I’ve always been interested in politics, it was working on a Congressional campaign that inspired me to write this book. We are lucky to live in a democracy, and no matter how you label your political views, I believe exercising your right to vote is a critical responsibility. Our votes shape our country’s future!

Each book has its unique challenges. I start with an idea, begin working on an outline that I know is fluid and not static, and determine how much research I need to do to write the book. I love the research stage but find working and reworking the outline both tedious and necessary. I think of the original outline as the view from 10,000 feet. As I write and rewrite, I slowly get closer and closer to the final map. Although anything and everything can change with feedback or one new idea. It’s like having your GPS recalculate your route based on new information. In this book most of the original structure gelled early on, so in that regard it was easier to write than previous books.

In the past I’ve written academic articles and humorous pieces for boating magazines as well as doing a monthly column on leadership for a local regional business journal for three years. I also self-published a book on interviews and tips for interviewing for my consulting practice - Disastrous Interviews: The Comic, Tragic and Just Plain Ugly. It was based on stories collected from people who had experienced bad interviews. My hope was that by reading about what had happened to others, individuals could find solace, learn, and have some good laughs. Currently, however, I am focused on writing lighthearted mysteries.

I love my “inner sanctum.” It isn’t a large space, and the bookshelves are crammed with books and miscellaneous stuff – everything from a pile of vinyl records to pictures of people and places to a box containing an antique Viewmaster Stereoscope. There’s even a plastic wind-up pig and a finger puppet bat. I don’t think of myself as someone who likes clutter, but I would rather spend my time writing than cleaning up. So once something makes it to one of my bookshelves, it tends to be there for a while.

The best thing about my writing space is the reason I have my computer facing a wall. If I didn’t, I would spend far too much time looking out my window. There’s a lovely view of the water and the land in the distance. My “seal of approval” swims by on a regular basis. There are lots of birds, including herons and eagles. There are pleasure boats, people paddling by on kayaks, tugs pulling tows--. It’s a wonderful place to write – as long as I keep my computer facing the wall.

My husband and I took a year off and sailed “around the world in the San Juans.” (We had big plans but ended up hanging out in the American and Canadian San Juans, often tied to a dock.) We spent our days writing and exploring the islands. Unfortunately, nothing I wrote ended up getting published, and we decided to try our hand at commercial salmon fishing. After that I worked at a number of other jobs. It wasn’t until recently when I began writing full time that I started thinking of myself as a writer.