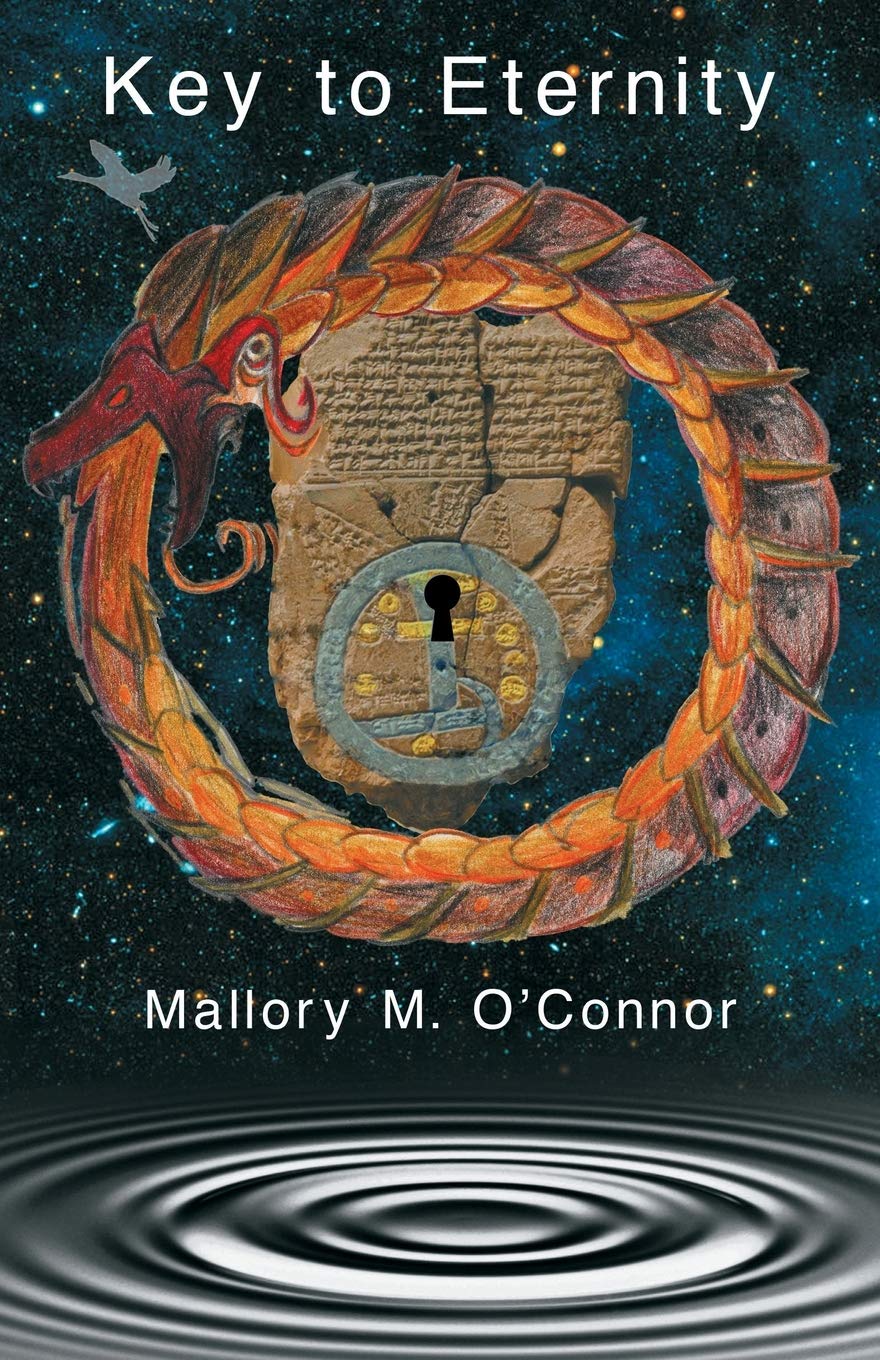 Female psychic detective, Epiphany Mayall is on the track of stolen antiquities and a clay tablets relating the Epic of Gilgamesh. Through a combination of her psychic abilities and the technological resources of PI Maro Gaido and the FBI's art crimes division, they zero in on the mysterious conspirators who people the shady global underworld of the arts and antiquities black market. Can they find the Gilgamesh tablet with its map to the “flower of immortality,” or will the treasure disappear forever into the private vault of a billionaire art thief? 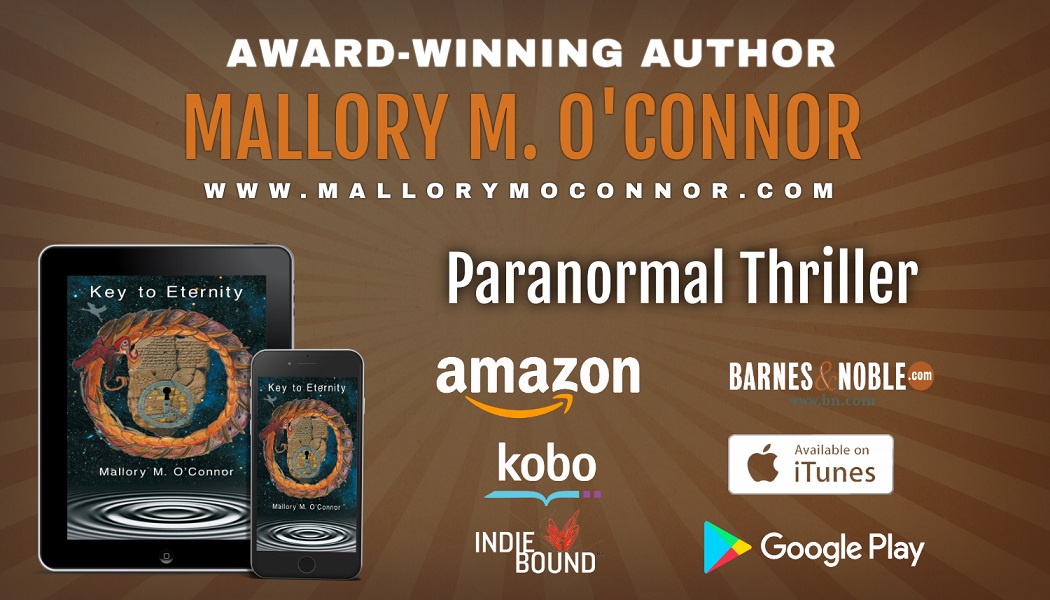 Epiphany Mayall got to her feet and hurried across the dining room. “What is it, Maddie?”

Epiphany leaned forward and peered out the window. Endora, her black and white cat, was crouched in the grass, completely focused on something. The cat suddenly flinched and jumped sideways, then resumed its position as though preparing to pounce.

“She’s stalking something,” Epiphany said, “But I can’t see what it is.” Even as she spoke, the cat once again sprang sideways and dropped to the ground.

“A bird maybe, or a frog. Goodness knows what she’s got cornered.”

Epiphany unlocked the window and lifted the bottom pane. She pressed her face against the screen and looked down. A slow wave of movement caught her eye. “Oh,” she said, stepping back, “it’s a snake!”

“A snake,” Maddie cried with delight. “Where?”

“Right below the window. Along the foundation. It’s hard to see because of the leaves.”

“I see it!” Maddie looked up at her grandmother. “What kind is it?”

“I don’t know, dear.” Epiphany turned away from the window. “Michael,” she called. “Michael, can you come here?”

The measured sound of Bach’s “Prelude from the First Cello Suite” halted abruptly and Epiphany’s son Michael appeared in the dining room arch. A brown-haired man with a round face and a neatly trimmed beard, he was already growing a bit stout in early middle age. “What is it, Mom?”

“Sorry to interrupt your practice, but Endora appears to have cornered a rather large snake, and I don’t know if it’s poisonous or not.”

Michael crossed the room to stand beside his mother and daughter. “Where is it?”

“Down there,” Maddie answered, pointing.

Michael braced his hands on the sill and looked. “I see it. Looks like a brown rat snake. They’re harmless.” He grinned at his mother. “Unless you’re a rat.”

Maddie wriggled under her father’s arm and peered out. “What’s it doing, Papa? Why is it turning upside down?”

“I’d really rather not.”

“Can we go outside, Papa, and get up close?”

“Sure. But we don’t want to get too close. Snakes get a little edgy when they’re shedding. But we should grab Endora.”

Maddie looked up. “Why, Papa?”

“Snakes are really vulnerable when they’re shedding. They need some peace and quiet.”

“What’s all the fuss in here?” A small woman pushing a walker came through the dining room arch, wisps of white hair radiating around her face.

“No, outside. Under the window. Endora found it,” said Maddie.

“Good for her,” Susan said. “Florida,” she muttered. “First alligators in the yard and now snakes. Sometimes I wish I was back in Ohio.”

“Watch it what?” Susan asked as father and daughter hurried past her.

“It’s shedding its skin,” said Epiphany. “Something snakes do now and then,”

“Mom,” Epiphany objected, “we had snakes in Ohio. Remember the time I brought that garter snake into the parlor when Reverend Ashby was visiting?”

“I remember telling you to get that evil serpent out of our house.”

“Serpents aren’t evil. They do a lot of good.”

“Fine. I just want them to stay in the garden where they belong.” Susan steered her walker toward the hall. “I’ll be in the kitchen if you want me,” she said over her shoulder.

Epiphany stood for a moment, considering. Then she headed for the kitchen door.

Michael and Maddie were standing next to the house gazing down in rapt fascination. Maddie had Endora in her arms, but the cat was struggling to get free.

“Here,” Epiphany said, reaching for the cat, “I’ll hold her.”

“Take a look, Mom,” Michael said. “It’s rubbed the skin loose from its nose. That’s the first step.” Michael put his hand on his daughter’s should. “Let’s stay back and bit and give it some room.”

They all took a few steps back from the struggling snake, then watched as the process continued.

“Look,” Maddie cried, pointing. “It’s crawling out of itself!”

Epiphany watched in amazement as the snake writhed and pushed, rubbing its nose against the twigs, then oozing away from its own skin like a lady peeling off a nylon stocking. The empty sack of paper-thin scales lay still as the snake inched forward bit by bit until it left its former self behind. Its new skin shone, bright and smooth, in the late morning sun. It rested for a few moments, then curved its way along the base of the foundation, pausing now and then to sample the air with its tongue. Then it flowed around the corner and disappeared into the grass.

“Now that,” said Michael, “was a great performance.”

“Worthy of a master,” Epiphany agreed.

Epiphany set Endora down and joined Michael for a closer look. “My goodness,” she exclaimed. “You can even see its eyes.” The delicate ribbon of skin was like a phantom serpent¾nearly weightless and paper thin but decorated with a herringbone pattern of tan and brown. The head was perfectly formed¾mouth open, clear bubbles where the eyes had been. It looked as though it might at any moment re-animate itself.

“Can I keep it?” Maddie asked, the snakeskin dangling from her hands.

“Fine with me,” said Michael.

It wasn’t until that evening that Epiphany thought again about the snake. She was sitting on the screened porch listening to the chirp and buzz of frogs and cicadas. In the distance, a limpkin gave a shriek and a pair of Barred Owls erupted into a riotous duet of hoots, cackles and gurgles. The early summer air was heavy with moisture blowing in off the nearby Atlantic. Lightning flickered toward the east, too far away for the thunder to be heard.

Epiphany drifted with the gentle breath of the wind, watching the Spanish moss swaying like silver veils from the branches of the oak trees.

But her peaceful reverie was suddenly interrupted with a mental image so clear and so immediate that she bolted upright and stared out at the dark canvas of the yard. The image blazed in her mind’s eye¾a naked man sprawled on the ground surrounded by two snakes. The man was so emaciated she could see his ribs quite clearly. His hair was carefully fashioned into small curls, almost as though he was wearing a wig, and his beard was also formally dressed. In his left hand, the man was grasping a leafy plant. But one of the snakes had also grabbed the plant in its mouth and appeared to be trying to take it from the man’s clenched fingers. She then realized with a little jolt that the second snake was the empty skin of the first.

She tried to determine what the image was made of¾clay, perhaps, or maybe carved, the lines enhanced with a dark pigment. It looked ancient, but undamaged. Like a piece from a museum. She dredged her memory for something similar. Egyptian, maybe. But no, not Egyptian.

Mesopotamian! That was it. She remembered seeing a similar image when she took a course on the art of the ancient Near East. This was an image of the legendary King Gilgamesh who left his home to search for the secret of immortality.

Instructed by a wise man, Gilgamesh locates a magical plant that renews youth. But during his journey home, he falls asleep. A serpent steals the plant, eats it and promptly sheds its skin. Thus, the serpent thwarts man’s hope for immortality, keeping for itself the ability to renew itself and re-emerge in all its youthful radiance.

When she finally went inside to go to bed, Epiphany couldn’t stop thinking about the possible connection between witnessing an actual snake shedding its skin and the evening’s vision of the Mesopotamian carving. Had watching the snake simply jogged her memory, or was there some deeper meaning? What message was Spirit sending?

“You’d think that after thirty years in this business, I’d be able to figure out where a damned vision came from,” she said aloud. But it just wasn’t that easy, was it?

Psychic visions had been a part of Epiphany’s life since childhood¾images, voices, visitations, phantoms materializing out of thin air. Sometimes she just wanted it all to go away¾for the voices to fall silent, the images fade to black. To stop being a conduit between the living and the dead. She remembered saying to a reporter in a TV interview that sometimes her “gift” was more like a curse. But there was no escaping destiny.

“Get over it,” she told herself. She would just have to wait for Spirit to send her the next clue. 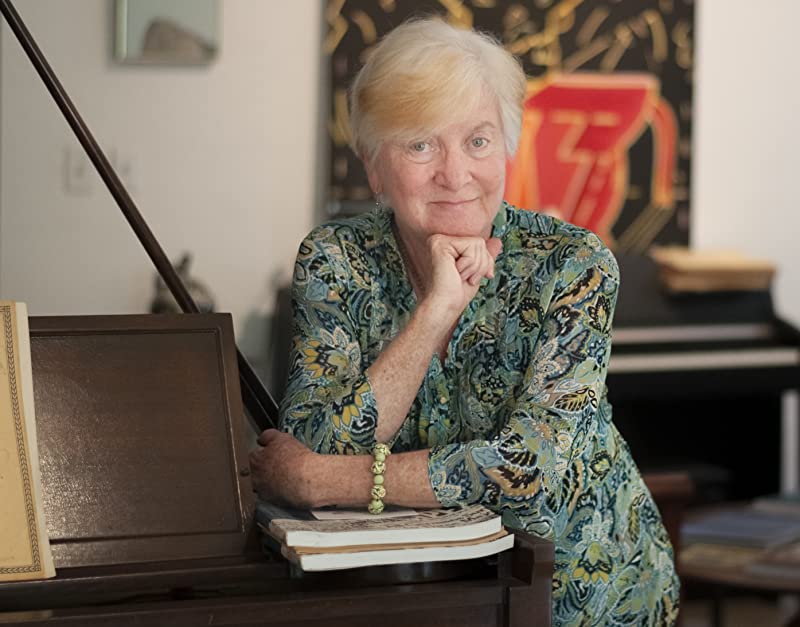 Award-winning author Mallory M. O’Connor is a writer, art historian, musician, and professor emerita at Santa Fe College (SFC) where she taught art history and served as director of the Santa Fe Art Gallery. Since retiring from her position at SFC, Mallory has written five novels, the American River Trilogy. Book One, American River: Tributaries, was published in 2017 and recently won First Prize in the Fiction Category from Northern California Publishers and Authors. The book also won the President’s Award for Fiction from the Florida Authors and Publishers Association. Book One of her new paranormal/eco-thriller series, Epiphany’s Gift, was released in April 2019. Key to Eternity is Book Two in the new series.