This post is part of a virtual book tour organized by Goddess Fish Promotions.  Night to Dawn Magazine & Books LLC will be awarding a $10 Amazon or B/N GC to a randomly drawn winner via rafflecopter during the tour.

Meet the Corelli clan. Told by the oldest grandson, Frank, this family tapestry, with pathos and hilarity, begins weaving itself in the 1930s and rollicks through four riotous decades. The strongest thread is its oldest member, Antonio. To the ragtag Corelli clan, he is an ocean—an unwavering force upon which they rely. Lizzy, the youngest Corelli, is the brightest thread. Emanating from her is the light by which they see the world. Spanning these dynamic figures is an oddball cast of characters that keep one another in stitches right up until the life-affirming surprise birthday party of their beloved patriarch...

After arriving home, Uncle Al and Uncle Nunzio—feeling a twinge of guilt that they were awarded the luxury of driving home when Antonio’s trek required two units of public transportation and a hike—waited at the kitchen table for Antonio to return. They were seized with a sudden mixture of excitement and trepidation when they heard his boots climbing the stairs to the porch. Antonio had a similar mix of feelings when wondering about Uncle Al and Uncle Nunzio’s first day on the job. Admittedly, he spent a good deal of the day distracted when he considered all that could go wrong. At the very least, he was certain that they drove off to someplace; he smirked upon noticing how crookedly the Dodge Sedan was parked at the curb. What he couldn’t explain, when at first, he opened the door, was the awful smell that accosted him, but he quickly came to his senses and figured that it must be the remnants of the slaughterhouse come home on his brothers’ clothing. He didn’t take into account having that to look forward to every night.

“I can smell that you two actually made it to work today,” he called to Uncle Al and Uncle Nunzio from the parlor.

“We wouldn’t let you down, Antonio,” Uncle Al called back.

“Yeah, Antonio,” Uncle Nunzio followed. “We want you to be proud of us; especially after buying us that nice car.”

“What the hell it that!” Uncle Al and Uncle Nunzio were not used to hearing Antonio shriek or appear astonished, but that’s precisely how he appeared and sounded once he reached the entry way to the kitchen.

“I can see it’s a pig, Al!” First, Antonio’s eyes widened, then his nostrils flared. Lastly, the veins in his neck became visible “Trust me, I know a pig when I see one. But why is one on top of our kitchen table?”

“His name is Frank,” said Uncle Nunzio. “We named 'im after Frank Crosetti. You know, the shortstop for the Yankees? Only instead of scooping up grounders and tossin’ 'em to Gehrig, he’s gonna give us pork chops for the next year!” Proudly, Uncle Nunzio patted the swine’s rump.

“Is that so? Ol’ Frank, here, is gonna give us pork chops, is he? Well, what about this?” Antonio pointed to the coat of fur that was still blanketing the swine. “And look,” he added, “the sonofabitch still has hoofs!”

“We thought you could take care of that, Antonio,” said Uncle Al.

“I could take care of it?” Antonio’s hard glare made Uncle Al and Uncle Nunzio shrink in their seats.

“Yeah, Antonio,” Uncle Nunzio shakily began. “Like always, we thought you’d know what to do.”

“Nunz, be thankful we don’t own a meat cleaver,” said Antonio. “Be very thankful; 'cause once I got the hang of it, I wouldn’t stop with the pig.”

Antonio collapsed in a chair, buried his head in his huge, powerful hands, and tried to figure out what one does when presented with, of all matters, contraband swine. “Pig smuggling,” he mumbled under his breath. “I coulda guessed.” 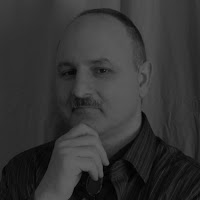 Michael DeStefano is from Philadelphia, where he is the owner of a hairstyling salon. Currently, he makes his home in Cinnaminson, New Jersey, is the husband of a Gulf War veteran, and author of The Gunslinger’s Companion. Any thoughts or criticisms readers of Waiting for Grandfather wish to share may be sent to dtbhs@aol.com.