This post is part of a virtual book tour organized by Goddess Fish Promotions. Maggie Clare will be awarding a $25 Amazon/BN GC to a randomly drawn winner via rafflecopter during the tour. 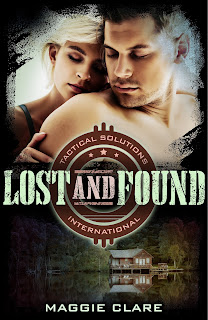 Dr. Lissa Morgan has had a crush on her best friend’s older brother since they were kids, but handsome, brooding Cam Taylor has never given her a second glance. When Cam unexpectedly shows up on Lissa’s doorstep bleeding and bruised, his personal life in shambles, things between them take a steamy turn.

After an incredible weekend with the sweet, sexy doctor, Cam realizes what he’s been missing. But he’s run from intimacy his whole life, sure he doesn’t deserve a woman like Lissa. He’s doing her a favor by walking away – or so he tells himself.

Frustrated and hurt by Cam’s distance, Lissa must nonetheless rely on his private security firm when an annoying admirer becomes a threat. The more time Cam spends with Lissa, the faster his defenses crumble. When the disturbed stalker finally makes his move, Cam will do whatever it takes to save the woman who’s slowly healing his wounded soul.

Lost and Found is the third book in the Tactical Solutions International series but can be read as a stand-alone.

Cam woke with a splitting headache and no idea where he was. For a few seconds, before his foggy brain cleared, he simply stared at the white ceiling overhead. He ran a hand over the soft blanket covering him, and turned his head carefully to the side. A glass of orange juice, a bottle of pills, and a note sat on a coffee table. His cell phone, keys, and wallet were in a neat pile next to the glass.

Snapshots of memory flashed back into his head, coming in reverse order, like a videotape rewinding. Liss suturing his head. Her friend bringing supplies. Cam sitting outside her door, getting drunk while he waited for her to come home.

He reached for the note, licking his dry lips and squinting past the pounding in his head.

Things you may do: 1. Drink this juice and take some Tylenol. 2. Take off your bloody clothes and leave them in the basket. 3. Shower – the sutures won’t dissolve. 4. Move into my room for more sleep. Things you may not do: 1. Leave – doctor’s orders.

He grinned, hearing Lissa’s voice in his head as he read her instructions. His smile faded when he remembered what had driven him to her doorstep in the first place. He couldn’t think about that right now. He considered sneaking out before Liss returned from wherever she’d gone off to, but he discarded the idea pretty quickly. He needed the pills, the shower, and more sleep.

Was there any specific event or circumstance that made you want to be a writer?

I’ve been writing for as long as I can remember. I loved to write stories as a child. In fact, when I was sorting through some of my grandma’s things after she passed, I came across a whole collection of poetry and stories I’d written. It was very sweet. In my previous professional life, I’ve written some ad copy, blog posts, and done some editing for school publications, but I had very little time or energy for creative writing.

When my children got older and the dynamics of my family shifted, I began to consider changing careers. While I pondered what was next for me professionally I took on a yearlong writing project at work thinking it would give me the change of pace I needed. Turns out it was one of the most satisfying things I’d ever done in my career. Since I was in the habit of writing every day for work, I challenged myself to write creatively every day as well. Lo and behold, when the report was finished a year later, so was my first manuscript. Another year after that, and I was writing full-time.

No, actually! You may know that Maggie Clare is my pen name. I began writing science fiction and other speculative work under my given name, Tabitha Lord. In fact, Maggie will be taking a break so Tabitha can finish a new manuscript! My first love was science fiction so that’s where my writing journey began, but I do really enjoy writing in the romantic suspense genre as well.

Can you say more about why you like the romantic suspense genre?

I really love the strong, character driven aspect of romance and the high intensity action scenes you get with suspense. Romantic suspense is an exciting, emotional blend of the two genres and really fun to write. Also, I’m a sucker for a happy ending, and that’s a must in romance!

With my romantic suspense books, I usually have a character in mind first. Often, they will come to me fully formed - with a name, physical description, background, personality, and profession! And because these are romance novels, I pretty quickly have to think of a suitable partner for them.

For the TSI series, the characters are interconnected, so while the stories are standalone, the idea for the next storyline might develop as I’m writing a previous one, or even play off it in some way. Occasionally, a minor character in one of the books will have so much personality, I know they’re going to get their own book eventually even if that wasn’t in the original plan!

It’s interesting because although this is the third book in the series, I actually wrote parts of it first, before I ever envisioned the TSI series. I’d just finished the final draft of a science fiction novel, and I wanted to take a break from that story for a little while. After just a few weeks of working on my new idea, I had to return to writing my science fiction series, and Lost and Found sat in my files for about a year. When I eventually began developing the TSI series, I dusted off that partial manuscript, gave Cam a new and better backstory, and turned it into book 3. So, in a way, this one was easier than the other books in the series, because it was already half finished!

Give us a picture of where you write, where you compose these words…is it Starbucks, a den, a garden…we want to know your inner sanctum!

Well, currently, parts of my house are being renovated, so I’m downstairs in our finished basement trying to hide out from the construction noise! I love to write on my front porch, and weather permitting, I’ll go out there whenever I can. The coffee shop was a favorite before COVID, but now the kitchen table has become my go-to spot. Earbuds are my friends, and I can basically tune out most of the hustle and bustle in my house, with the exception of power tools!