A late-night call is all it takes for rookie lawyer Corrie Locke to kiss her day job at the movie studio goodbye, and do what she does best: flex her sweet P.I. skills and go undercover to find a senior who’s missing from a posh retirement community. One small stumbling block: skirting past security to gain inside access to the exclusive Villa Sunset. Time to call in the heavy artillery. Besides former security guard turned legal assistant—now wannabe P.I.—Veera, Corrie relies on a secret weapon: her mother, a surprisingly eager addition to Corrie’s team. Armed with enough pepper spray to take down a band of Navy Seals, Mom impersonates a senior to infiltrate the Villa, Corrie, and Veera in tow. Turns out the job’s not as easy as they’d thought. These seniors have tricks tucked up their sleeves and aren’t afraid of using them.

The action gets dicey when the missing senior case turns into attempted murder by a criminal mind who’s always one step ahead. Corrie’s hot on the trail, but finds more than she bargained for…when her mother becomes a target.

Another light and humorous mystery from Lida Sideris. I previously read Murder Double or Nothing and had lots of fun. The same is true with this one. I really enjoy her character Corrie, an attorney and a “sort of” private investigator.

This is a well-written enjoyable mystery with plenty of red herrings to keep you guessing. Hope we get more from Lida Sideris. 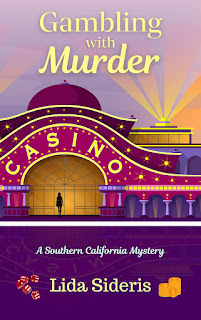 I pinned the beam of my light into a dark corner of the warehouse. Four large pieces of luggage lay side-by-side atop a folding table. Everything surrounding me was in stacks and piles. The luggage exteriors, aluminum handles, and zippers looked new. Why store unused luggage in a place with worn-out, broken-down stuff?

“Hold on.” I grabbed a suitcase and slid it closer. I shone my light on a combination lock. Next to it sat a small keyhole. Pulling out a paperclip from my pants pocket, I shoved it into the keyhole and jiggled it around.

We’d parked behind the warehouse. I’d left Veera hiding near the entry to keep an eye out. I popped open the lid of the suitcase. Folded bedsheets lay on top. Easing them aside, I gaped at the blood-red cape with a stylized golden “S” on the back. “It’s Superman’s.”

“The cars parked next to each other,” Veera said.

To the side of the cape lay a pillowcase. I ran my fingers over something odd-shaped and bulky inside. I unwrapped it to find a one-of-a-kind, golden gun. “No way.” A cigarette case formed the handle. The trigger was a cufflink and a fountain pen served as the barrel. It was a prop gun from a James Bond film.

“Two muscular guys came out of a van,” Veera said. “There’s a third person taking his sweet time. Looks to be someone smaller, older by the way he moves. And he’s wearing a dress, which means he could be a her. Headed your way. If there’s a backdoor, I’d use it.”

Veera and I swung around. Taller than the fence and far meaner looking, a uniformed security guard glared down at us, head cocked to one side. His top lip curled in a snarl. I half expected his mouth to be filled with steel-capped teeth.

“Can you point us to the ladies’ room, please?” I asked. The name on his badge was Kyle.

“Get off this property.” He blinded us with his flashlight.

“Technically, this is city property.” Sounded legit to me.

“Any wiggle room in the ‘now’ part?” I took a step back and limped. I stalled, hoping to conjure up a way to get in. “I hurt my foot.”

Veera pointed at my boot. “Could be a sprain. You got a doctor inside those buildings?”

“Get out before I physically toss you out,” he said.

Kyle could probably pick me up and hurl me across the street with one hand, but Veera? It wouldn’t be so easy. Together, we could take him. He leaned forward with a grunt, just as I leaned toward Veera. “You thinking what I’m thinking?” I whispered. I was betting his knees were his weak point.

Veera rolled her eyes over him and whispered back, “I’m thinking we should get going.” 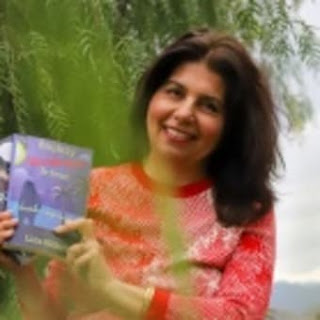 Lida Sideris' first stint after law school was a newbie lawyer's dream: working as an entertainment attorney for a movie studio...kind of like her heroine, Corrie Locke, except without the homicides. Lida was one of two national winners of the Helen McCloy Mystery Writers of America Scholarship Award and a Silver Falchion Award Finalist. She lives in the northern tip of Southern California with her family, rescue dogs and a flock of uppity chickens.