Murder at Serengeti Plains is the third mystery novel in the series, featuring amateur sleuths Hazel Davies and Anna Kohl.  The earlier novels are Murder at Eagles Nest and Could They Be Twins?

The book is set in a new residential subdivision, Serengeti Plains, built by the renowned local builder, Zebra Homes.  It is located in the peaceful, historic town of Centerville, Ohio.  However, peace is shattered when the new residents are awakened one morning by the sound of police sirens.  The procession of police cars, come to rest in their own neighborhood.  A body has been discovered!  Was it an accident or was it murder?

Hazel Davies and Anna Kohl have recently moved into this new subdivision.  They have previously helped the police to solve murders in both Florida and Ohio, but they did not expect to find one on their own doorstep.  When the police begin to look at their friend as the perpetrator, they find themselves drawn into yet another murder investigation.

The National News on television led off with a headline about house prices and the shortage of homes for sale throughout the country.  In Centerville, Ohio there was a growing, new sub-division, Serengeti Plains, being built by Zebra Homes.  The builder named the development after a district in Africa where zebras roam wild.  His company was well respected and recognized for building beautiful single-family homes, laid out to form desirable neighborhoods and the Serengeti Community was fast becoming a gem amongst their many projects in the area. 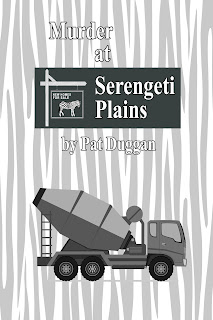 The construction site was a hive of activity, with multiple homes in various stages of completion as demand for new homes pressured the builder to construct his properties as quickly as possible.  There were contractors of various disciplines swarming all over the building site, working feverishly to complete each unit while maintaining the builder’s required quality and standards.

All of this activity invariably led to disagreements and friction amongst the workers.  One man in particular, Larry Cox, who worked for the excavation company and held an inflated opinion of himself always seemed to be at the center of much of the unrest.  He liked to ‘throw his weight around,’ and talked down to the other workers on the site.  He continually bragged about his thirty years’ experience and seemed to think this cemented his superiority over anyone and everyone on the building site, including buyers who frequently visited the site to watch the progress of their ‘soon to be’ new home.

Originally from Manchester, England, Pat Duggan moved to the U.S. in 1985.  After a career in finance, which included running her own book-keeping and tax business, in the Cincinnati area, Pat and her partner retired and moved to Oregon.  Years later, they embarked on a five-year journey, traveling across the country in a motorhome.

Writing was a whole new direction for Pat, which began with two non-fiction books – The Power Within and Finding God in an RV.  Then she branched into writing fiction as she turned to her love for solving murder mysteries and the challenge to figure out ‘whodunit!’

Sadly, their traveling days are over, but settling down has brought its own reward as it inspired this latest novel.

Yes!  The idea for Murder at Serengeti Plains originated from our recent decision to buy a home in a new subdivision.  First, we had our new house built, which involved multiple visits to the site to monitor the progress.  As we moved into one of the first homes completed on the cul-de-sac, we were able to watch as the construction progressed around us.  I owe a debt of gratitude to the two site managers, not only for the way they monitored the building of our new home but also their patience in answering my numerous construction questions.

My storylines come from everyday events which become subjected to my twisted imagination.  For example: a quiet walk around our building site, is transformed into ‘a body in an unfinished basement.’

This book, like the first two novels, seemed to flow naturally from my imagination.  At the end of each section, the next step seemed to present itself naturally.

Cozy Mystery is the only fiction genre I have written.  However, I have two non-fiction books entitled Finding God in an RV and The Power Within, both of which relate to my spiritual journey.

Until recently we lived in a motorhome and traveled around the country.  The first two novels were written while sitting in the front passenger seat of the motorhome looking through the windshield at the campground of the day.  Murder at Serengeti Plains was written in the office of our new home.  Now, I look out of the front window with a view of neighbors walking their dogs and children playing in the street after they finish school.

The first book I published was Finding God in an RV.  It relates the miraculous events of our first trip in the motorhome, traveling from Oregon to Ohio and then down to Florida.  I found myself driving a thirty-seven foot motorhome and towing a car.  Prior to this trip, the largest vehicle I had driven was a Ford Windstar.  This experience in itself was a miracle, but God had many more miracles for us on our journey.  When we arrived in Florida for the winter, I felt compelled to write about  the fifty plus miracles I had documented on the journey.  They ranged from finding our way on unknown roads, when the GPS failed us, to God answering my prayer to see a bison, by having it pass alongside the passenger side of our car, barely missing the side mirror, when we were parked at the side of the road in Yellowstone.