Enough to Make the Angels Weep

This post is part of a virtual book tour organized by Goddess Fish Promotions. Ernesto Patino will be awarding a $30 Amazon or B/N GC to a randomly drawn winner via rafflecopter during the tour. Click on the tour banner to see the other stops on the tour.
Hired to investigate the murder of an 84-year-old widow, P.I. Joe Coopersmith hits one dead end after another in his search for leads. 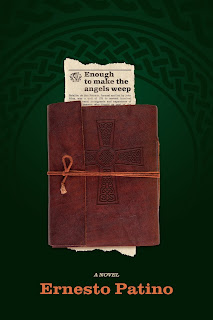 With few clues and no suspects, he nearly gives up, until he uncovers a connection to a bizarre plot to kill the descendants of Irish soldiers who fought for Mexico during the Mexican-American War. Known as San Patricios, they belonged to the St. Patrick's Battalion, an elite Mexican unit composed mostly of Irish immigrants. When a well-preserved diary of an Irish soldier turns up, Coopersmith knows he's on the right track. He digs deeper into the plot, soon learning the identity of the man behind it and his warped motive for the cold-blooded murder of the elderly widow.

Excerpt from the diary of Kevin O’Leary.

I am writing this from the home of Father Bernardo, who is not only my protector but my only source of information about what is happening throughout the city. This morning the last of the condemned San Patricios were hanged within view of Chapultepec Castle. Father Bernardo witnessed the event, which he described as barbaric beyond belief. With nooses around their necks, they waited over 3 hours before they were hanged. May they rest in peace and may Mary, our Mother, watch over them for eternity.

As I deserted after the battle of Monterrey, I know the Americans will show me no mercy. But I thank God that David McElroy and John Brooke were spared the noose because of their youth. They were with me when we slipped away from the Americans as they celebrated their victory.

About the Author
Ernesto Patino has been a musician, soldier, schoolteacher, FBI agent and private investigator. He is a multi-genre author whose books range from Mysteries and Thrillers to Romance and Children’s books. His published works include In the Shadow of a Stranger, Web of Secrets, The Last of the Good Guys and One Last Dance. He lives in Southern Arizona with his wife Pamela with whom he shares a passion for ethnic cuisines, classical music and foreign films.