All Signs Point To Murder

This post is part of a virtual book tour organized by Goddess Fish Promotions. Connie di Marco will be awarding a $20 Amazon or B/N GC to a randomly drawn winner via rafflecopter during the tour. Click on the tour banner to see the other stops on the tour.


Rob Ramer was the perfect husband until he committed the ultimate family faux pas—he shot his sister-in-law to death...

Believing himself under attack by an intruder in his home, he fired back. But when evidence is discovered that Rob’s wife, Brooke, was plotting his murder, Brooke is charged with conspiracy in her sister’s death. Geneva, a third sister, is desperate for answers and seeks the help of her friend, San Francisco astrologer Julia Bonatti. Geneva’s lost one sister and now it seems she’ll lose the other. Was this a murder plot or just a terrible accident? Julia vows to find the answer in the stars. 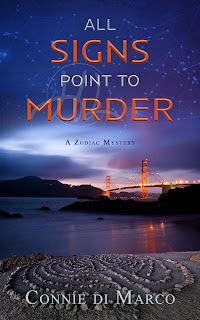 The building on Guerrero was a once proud Victorian with bow front windows. It had since been broken up into six small units and fallen into disrepair. There was something about this chore that made my stomach go into knots. Rummaging through a dead woman’s possessions was bad enough, but what if I found something that implicated Moira in a crime? Should I remove it and risk the police finding out?

I approached the long stairway leading to the front door. The wind had died down and now fog danced around the streetlights. It was eerily quiet. No lights shone from any of the windows. I climbed the cracked granite stairs to the entrance where the weathered door stood ajar, listing slightly on its hinges. Inside, a bare overhead light bulb cast a meager glow down the long corridor, cannibalized from a once grand entryway. The hallway smelled of dirty cat litter, moldy vegetables and cigarette smoke. I followed the corridor to the end, and stopped at the last door on the right.

I slipped the key into the lock and reached around the door jamb where I felt the light switch. A rusting chandelier with two bulbs missing illuminated the one large room that was both Moira’s living room and bedroom. The main room housed a collection of hand-me-downs and broken furniture, ripped curtains and piles of clothing in various spots around the floor.

I heaved up the mattress, first on one side and then the other, making sure nothing was hidden between it and the box spring. I pulled open each of the bureau drawers, checked their contents and pulled them all the way out to make sure nothing was behind them. I opened a small drawer in the bedside stand. Amid a loose pile of clutter was a dark blue velvet box embossed with the letter “R” in cursive gold script. Could this be from Rochecault? I was fairly certain it was. Rochecault is an infamously expensive jeweler on Maiden Lane downtown. How could Moira have shopped there?

I opened the box and gasped. An amazing bracelet heavy with blue stones in varying colors rested inside. The setting had the slightly matte industrial sheen of platinum. Moira couldn’t possibly have afforded this. Shoving the box into a side pocket of my purse, I decided I was definitely not leaving this for the police to find, and slid the drawer shut.

I scanned the room. Moira hadn’t been much of a housekeeper and it didn’t appear as if there were many hiding spots. My eye caught a small black notebook under a jumble of papers and unopened bills on a rickety desk. I dropped my purse on the floor and reached for the book. A searing pain shot through my skull. Blinded, I fell to the floor.

Connie di Marco is the author of the Zodiac Mysteries featuring Julia Bonatti, a San Francisco astrologer who never thought murder would be part of her practice: The Madness of Mercury, All Signs Point to Murder, Tail of the Dragon, Serpent’s Doom and Enter a Wizard, Stage Left (a prequel e-book novella). Writing as Connie Archer, she is also the author of the national bestselling Soup Lover’s Mysteries from Penguin Random House. You can find her excerpts and recipes in The Cozy Cookbook and The Mystery Writers of America Cookbook. Connie is a member of Mystery Writers of America, International Thriller Writers, Crime Writers Association (UK) and Sisters in Crime.