All Is Set Anew

This post is part of a virtual book tour organized by Goddess Fish Promotions. Jim Cheney will be awarding a $15 Amazon or B/N GC to a randomly drawn winner via rafflecopter during the tour. Click on the tour banner to see the other stops on the tour.

A fast-paced examination of loss, survival, and ultimately acceptance of those things we do not understand but must contend with as if our lives depend upon it. 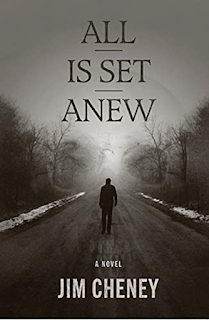 From deep in the rural Tennessee woods, two brothers flee their murderous father only to find that a violent, supernatural force has followed their escape and will haunt their family for multiple generations.

All Is Set Anew is the story of abandonment and its subsequent revenge, set against a backdrop of characters imprisoned by poverty and self-doubt and their struggle to outrun the evil and illness that relentlessly pursues them.

He is coming into the yard, weaving through the trees along the hard dirt path, the soil black and compacted from our footsteps to and from the cabin. There are four of us living here: my brother Terrell, my mother, my father, and me. The man coming up the path is my father and my mother’s husband. He is born of fire, I think. It burns in his face and is rancid on his breath. He is consumed with demons, and I watch carefully from the wood pile where I have been splitting the logs, not hiding, but not making myself known. The old man stops and steadies himself against the tree and spits on the ground. He is holding a black lunch box that he almost drops on the pine needle floor. He is moaning and singing to himself. He is alone in this world. We are the shadows that pass through and he lashes out at us with hands that are stained and scarred, with black earth beneath his nails. Always angry, fists and jaw clenched. His teeth are yellow and stained from the tobacco he chews, swallowing the brown juice, and when his eyes focus they look as if they would be hot to the touch. The door to the cabin opens and my mother steps onto the porch and observes him from a place of fear and hatred. She is waiting like the farm men wait for rain to bring relief. Terrell is behind her, back in the recess of the cabin room. I stand beside the wood pile holding the dull axe. The air is getting colder, the ground is harder, and the light seems always to be failing. When the sun comes it is far from the floor of the woods and it splinters through the branches. The old man looks into the yard from where he is leaning against the tree and his face is pale and there is a cut above his eye and we can see where the blood has run down the side of his face. He is unsteady and begins to walk, but falls. We do not go to assist him. Shadows are passive and only lurk. I look at my mother whose face is always pale. She is thin like a reed and there are knobs on her wrist and her skull is defined beneath the skin. She wears only one dress, as we wear the same tattered pants and loose shirts. These are the clothes that he uses to pull us toward him, and if it were not cold it would be safer to go without them as Adam did in the garden before the fall.

He has been to the mill for work and he has stayed there after to drink with the other men who hold no value for their lives or the lives of others. We stay home while he is away. Terrell goes to the county school, but I no longer go. I have learned to read and to write a little, but I am uncomfortable in the schoolhouse and while I am there I worry about Mother being alone in the cabin, because I am what stands between the old man and her. Once when I was walking in the woods, I came back to the cabin and he was standing on the rotting porch holding the axe that I am holding now, yelling at Mother to come outside. I came into the yard, as he is stumbling into the yard now, and he turned and looked at me, saying I should stay away, but I came up onto the porch and I could smell him from where I stood in front of the steps. He held the axe like a child, the wood handle balanced across his forearms, and I went past him into the room where Mother was standing in the corner holding herself and whimpering. I had left the door open, and when I went to Mother, he came into the open space and blocked out the light, and even though my back was to him, I could feel him there. I did not turn to look, but watched my mother’s eyes, which were large and wet. I touched her shoulder, but she did not look at me. He made a whistling sound and I felt my heart tighten in my chest and then the light came back into the room and I heard him go down the steps and I went outside to see he had dropped the axe on the ground and was walking into the woods holding the bottle that he kept in his coat pocket, singing up into the canopy about a butcher boy. He picks himself up and we are there to witness him.

About the Author: Jim Cheney was raised in North Georgia and has written professionally for more than 25 years. He has been published in media outlets throughout the United States. This is his first novel. He lives in Franklin, Tennessee with his wife, two boys and three dogs.