This post is part of a virtual book tour organized by Goddess Fish Promotions. Fatima Malik will be awarding a $10 BN/Amazon GC to a randomly drawn winner via rafflecopter during the tour. 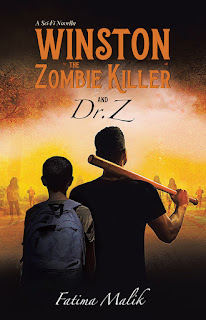 An emotionally unintelligent 18-year-old Winston wakes up to a zombie virus outbreak. Only adults seem to be affected while kids run around losing their minds . . . or brains?

Together, a 15-year-old genius Jason B (who seems to be taking this very well), and Winston fight to get out of town and make unexpected friends along the way. Keeping track of his zombie kills was hard enough, now he has to go hunting for a special zombie too?

A short read and for a teen who likes zombies, a fun read. I’m not sure how to explain here that a book about a smart kid and a..., well, another kid, and several zombies could be humerous, but it is. It’s the only way someone like me could read a book about zombies. There is plenty of action and zombie killing here. What I might say “yuck” or “eww” about, most young adults would more than likely describe as “cool”.

He had seen enough zombie movies to know what he was looking at, but there is always this civilized part of the brain that shuts up the instinct, and the word ‘overreaction’ echoes in the head. That was the only reason he asked the clawing zombie if she was okay and if he should call 911 for her. He felt really, really silly asking her, but God forbid he overreacted to something – can’t be uncool – even when some dude with a white van is clearly abducting you. Why Winston thought of himself as a ‘woman’ in dangerous scenarios was a mystery.

Before moving on, let me tell you a little about Winston. He fits the tall, dark, and attractive description along with toned muscles and six-pack abs (with no way of knowing if those abs went further than the elastic of his PJs). Being an athlete and a fan of Dwayne ‘The Rock’ Johnson, he had a similar round tattoo situation happening on the front part of his left shoulder.

Now imagine this impressive cocoa specimen screaming like a seven-year-old first thing in the morning when he opened the curtains. He had sort of stumbled backward before he regained his composure to ask the zombie if she was okay.

Much later, he’d find out that these zombies were operating on human instinct/subconscious, which was why his Zombie-kills were mostly female. They would’ve been attracted to him when they were alive, so now, as zombies, they wanted his brains. This theory would also explain why so many kids were unharmed. Since most live adults wouldn’t hurt kids, those instincts played a role. Also, for a virus that preyed on the human brain, it had no use for an under-developed brain of a child until that child turned eighteen.

Most survivors were waiting for some army or military (are those the same?) to rescue them. But it turns out an executive decision was made to save the children first because, being so many of them, they were trapped in homes with zombie parents or walking around in the malls or parks. These children were everywhere, and they were lost. 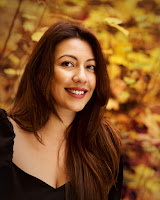 Fatima Malik has been alive for a little over a third of a century but she has been telling stories for over two hundred years, because being alive or dead wouldn't stop a true storyteller. Fatima is a quirky Pakistani-Canadian writer who lives in Ontario with her daughter.

Email ThisBlogThis!Share to TwitterShare to FacebookShare to Pinterest
Labels: zombies