This post is part of a virtual book tour organized by Goddess Fish Promotions. Stephen J. Moore will be awarding a $10 BN/Amazon GC to a randomly drawn winner via rafflecopter during the tour.

"I am Tobias Oakwood Ball," replied the young hedgehog, puffing out his spines. 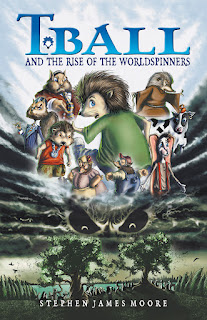 Newfound friends and future companions, T. Ball and Hector are destined to join the humans, four and two-legged ones, winged ones and the fairy folk who must unite in a titanic struggle of good vs. evil. A malevolent entity has come to the woodlander village of Two Trees, dispatched from the realms of the Worldspinners with a mission to bring darkness to all the worlds.

It is a plan that has been centuries in the making, nothing by accident and unknowing participants in the plot had been carefully chosen. Many times through history they have tried and failed. This time they will enter through the back door by corrupting nature.

There will be a bully called Spike, an overworked wizard named The Great Toothsayer, and an annual hedgehog race that sets everything in motion. Also, there are mobster squirrel gangs called Hoarders and a tyrannical mob boss named Clough Briarthack. Then there's the Professor, a lost book, hard-working moles and others—but that's to come in the next book. The story begins now . . .

Who tricked The Great Tooth?
Why must T. Ball find his own special gift?

This is kind of an enigma to me. It’s an interesting read that is in some ways an excellent read for Middle Grade readers. Then there is a part of it so dark I think it should be read only by YA readers. It’s full of magic and neat animals that I think young readers might enjoy. But there is also an underlying darkness that seems way too heavy for the 6th and 7th grade readers. I suppose that all depends on the age and maturity of the reader.

Slowly, hot wax trickled down the stem of the burning candle then fell to the ground, narrowly missing an oversized black beetle as it scurried across the dark cave floor into the sanctuary of the shadows. In the farthest chamber of this dimly lit grotto flickered more candles, barely illuminating a small, somewhat insignificant shape. Huddled in the corner was a shadowy figure, and the most unlikely of cave dwellers, a hedgehog. But this was no ordinary hedgehog. Indeed not. This was a venerable hedgehog of mystery, magic, and legend, a mystical magi known as The Great Toothsayer.

Almost two full hours had passed with only the routine scurrying of bugs and rustling of bats punctuated by the rhythmic scratching of the Toothsayer’s quill pen. With furrowed brow and unswerving focus, the mystical magi bent undisturbed over his desk, lost in concentration. Occasionally The Great Toothsayer absently glanced up from his work to monitor signs of activity from the Looking Bowl by his side.

Ancient in origin, the rough-hewn granite vessel had been sculpted for over a thousand years out of the cavern’s solid rock wall by the powerful forces of nature. But the Looking Bowl’s surface had remained as still as a millpond. Now suddenly, the water churned and bubbled, puffs of spectral smoke rose high into the cave’s dark interior. The Great Toothsayer put down his pen and hurried to peer into the stone chalice.

“Sooth! A dis’thaster!” he exclaimed.

Without delay, the venerable one rushed about, gathering his travelling cloak and staff.

This was not a good day for a catastrophe, if ever there was one. His project would have to wait. But so delicate a stage had his experiment reached that he felt forced to take it with him. It was a decision he would live to regret.

“No time to loo’th!” the wizard muttered worriedly as he reached for his bag of emergency herbal preparations. After a few speedily spoken incantations, the giant stone doorway to his sanctuary opened and The Great Toothsayer stepped outside, into the night. There was a sudden gust of wind that fought with the door before it closed behind him. Did he see something, a shadow perhaps, darting by out of the corner of his eye? Did it enter his cave? Time was of the essence; no time to turn back now. In less than two shakes of a hedgehog’s spines, the worried wizard was walking briskly down the moonlit path towards the woodlands. It was a long journey, mostly uneventful except for the occasions when the shadow of an owl crossed the moon. Let us not forget that even wizards are not one hundred percent owl proof. 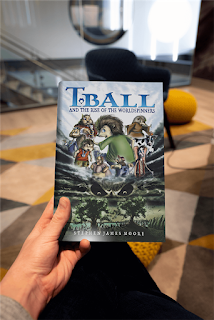 U.K Born Stephen Moore is a writer and accomplished Martial Artist. Lover of literature and ancient history. T. Ball was given in a dream and now his world is alive thanks to the T. Ball book series which covers human, animal and the unseen worlds showing victory through adversity and an incredible adventure through darkness and light. Stephen has also published The Christmas Adventure which shares T. Ball's world reminding us of the seasonal message.

PURCHASE LINKS T. Ball and the Rise of the Worldspinners

Email ThisBlogThis!Share to TwitterShare to FacebookShare to Pinterest
Labels: fiction, YA, young adult

I love the cover and think the book sounds good.