Twenty years ago, Willow Dwyer nearly died in a school shooting that stole the life of her true love, James. Now she’s forty, infertile, newly divorced from a man who refuses to leave her alone, and on the brink of a breakdown.

Even after all this time, she still finds herself unable to move forward from the dream of a life and family she lost that day of the shooting. At the suggestion of her therapist, Willow takes up the tango, the dance she’d mastered with James before his death. It seems an innocent enough plan, until Willow dances with Merrick Montagne. 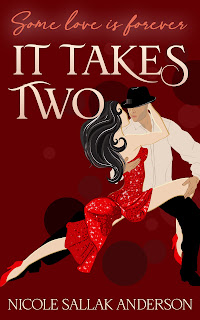 Merrick is a strikingly handsome, twenty-year-old college student with an uncanny ability for the tango. He makes her heart race for the first time in she can’t remember how long, and the strangest thing is, he claims he’s been searching for her his entire life. Willow doesn’t know if she believes him, or if she can handle the scrutiny she’s sure to get for dating someone so much younger than her. Yet no matter how hard she tries, she just can’t seem to walk away. When revelations begin to connect Merrick even further to her past, Willow must decide how much she’s willing to risk for a love that should be impossible, a love she’s not sure she could survive losing again.

“Excuse me,” he said, his blue eyes piercing, as if he could see into her soul. “What is your name?”

Her body quivered. Why did she feel like she was going to fall over? Two gin and tonics was nothing for her. It had to be his eyes—they reminded her of James.

“Willow.” Even her feet were now numb. “And yours?”

He gazed at her as if appraising a new car, and then smiled. “Merrick Montagne. May I have this dance?”

She nodded and followed him to the dance floor. The touch of his hand was electric, familiar, warm. She wanted to cast off the spell, but instead decided to be curious. Who was this young man? Merrick took her into his close embrace, and she smelled his neck—cologne but not obtrusive, mixed with the scent of a male, pure and raw. He led her in a sequence that slowly came back to her.

Willow held her ground, drawing tension out of Merrick. He waited for her, cheek to cheek, as she dragged her foot up his leg, one millimeter at a time, leaning her breasts into his chest. He gasped, and his heartbeat quickened against her own. When his body trembled like a taught bowstring, she placed her foot on the ground and he walked her again, releasing his breath as she granted him control of the dance. By the end of the triplet, the two of them were breathing as if they’d jogged for an hour.

Nicole Sallak Anderson is Computer Science graduate from Purdue University, and former CTO for a small Silicon Valley startup, turned novelist, speaker, and blogger. Her essays range from AI and Zen to direct democracy to the loneliness of modern parenting— featured as a top twenty story on Medium. She is the author of The Song of the King’s Heart Trilogy, is a series about the last native Pharaoh of Ancient Egypt and his quest to take back his ancestral kingdom from the Ptolemaic Empire. All three installments, Origins, Blood and Chaos, and Civilization’s End, are available on Amazon. Origins is also available on Audible.

Her recent novel, It Takes Two, is about forty-year-old Willow Dwyer, who takes up the tango and finds herself dancing in the arms of Merrick Montagne, a man half her age who claims he’s been searching for her all his life.