The Girl Who Knew Death

Princess spy Katrinka Lavrova meets Death in an epic showdown. The classic cat and mouse, but this time the Kat purposely becomes the mouse.

Navy lawyer and former First Daughter Faydra (Fay) Green is no longer haunted by the dark memories of her past, but what about her adopted daughter, Katrinka (Kat)?

Fay's world is once again turned upside down when a shocking secret about her adopted daughter, Katrinka (Kat), is revealed. For Kat, her nightmarish reality is just beginning. Before Fay can help Kat make any decisions about her future, Kat is arrested and thrown into an Egyptian prison. She manages to escape but must flee to safety across Europe, trying to stay one step ahead of numerous mysterious pursuers.

Faydra's grip on certainty distorts as she confronts the angel of death whose interest in Kat is unsettling. Can Faydra and Kat stay one step ahead of Lady Death and demons? Will Kat determine her own future, or will she allow it to choose her? 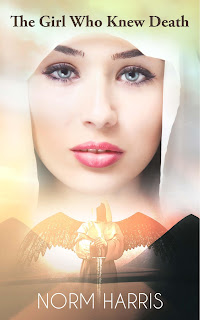 The tourist dressed in white shorts and running shoes, a tangerine top, a ball cap, sunglasses, and a red backpack descended the gang plank from the ship to the dock at Cruise Ships Dock at Limassol, New Port. Once on the dock, she paused to ensure the two men lurking in the shadows of the terminal building had noticed her. She hailed a cab. Her destination was the Russian Embassy in the nearby capitol of Nicosia. The trip to the embassy would take almost two hours. Occasionally, she checked to be sure the men were keeping up with her. She wanted to know where they were at all times. Each morning, she began her day with but one simple rule Irishka has once taught her: “Every morning in Africa, a gazelle wakes up. It knows it must run faster than the fastest lion or it will be killed. Every morning, a lion wakes up. It knows it must outrun the slowest gazelle or it will starve to death. It doesn't matter whether you're a lion or gazelle. When the sun comes up, you'd better be running.”

I must run today. Every day. Without fail, Kat thought.

Norm Harris' first novel debuted on an Amazon bestseller list in 2002. It was a one-and-done, but now he's back with a plan to publish a couple of sequels to that first mystery/thriller of days gone by. Except for time spent in military service, he is a second-generation Seattleite (that's what they call those who dwell in the shadow of Mt. Rainier), with his legal beagle son, K-K, and five giant tropical fish. His upcoming release, The Girl Who Knew Death, is the fourth book in what he hopes to be an award-winning Spider Green Mystery Story series.