Ugliness is power, and the Virus of Beauty is spreading causing panic throughout the witch population.

Wilf Gilvary is a teenage wizard who is terrified of using magic. When his father dies under mysterious circumstances, Wilf is plunged into the middle of a political struggle between the witches and wizards in the Magical Realm. He’d rather play soccer than practice magic, but he’s forced to make a choice between the life of a normal Hong Kong teen and one of wizardry after a powerful virus begins to decimate the witch community. The cure is spellbound in a journal Wilf inherited from his father and when his friend Katryna contracts the virus, Wilf understands that he must overcome his fear of magic to unlock the journal’s secrets – but will it be too late to save her?

What an interesting book. It holds a mystery or suspense within and yet it contains some very realistic thought-provoking issues. The idea of ugly coming out on top of beauty is a wonderful concept and makes for an even more interesting story.

I’m not often into witchcraft stories but this storyline and its characters were very realistic in so many ways. I think as I read, I began to picture Lyall’s characters as true-life people rather than witches.

With disease comes beauty and with non-beauty comes goodness and health. I loved it from the beginning and throughout this whole fascinating and well-written story.

What a great debut series. The Virus of Beauty is Book 1 in a series titled the same. C B Lyall already has book 2 published. Both books have good reviews. Check them out here:  https://amzn.to/3iB1YXv

The tattoo pulsed. He shoved the hand into his pants pocket and continued threading his way through the store’s cluttered shelves of T-shirts, Laughing Buddhas, shot glasses, and Happy Cats. The sinking feeling in his stomach grew.

A sharp pain shot up his arm.

A rumbling groan echoed around the store. He glanced towards the alcove housing the Mages Crystal. His eyes widened as the mirrored surface glowed red. A loud crack pierced the air like a ball smashing through a window. He ran for the supply closet and forced his six-foot body inside.

Quartz exploded across the room from the crystal’s center.

He felt a whoosh of air next to his ear as he slammed the door shut. He switched on the closet light and stepped backward into brooms and mop handles that banged the back of his head. A large piece of polished quartz, still vibrating from its violent impact with the wall, reflected the shock in his gray eyes.

Thuds echoed in the tiny room as projectiles impaled the door. He touched his ear, but seeing no blood on his fingers, exhaled. That had been too close.

Several seconds passed before he braved stepping outside. The store was filled with colliding rainbows as sunlight hit the debris. Wilf blinked rapidly. Crystal daggers studded the closet’s wooden door. All he’d done was look in the crystal’s direction, but his father would blame him for this disaster.

“Wilf, is that you?” Reginald’s shout was followed by a creaking sound from the basement stairs.

Wilf bolted for the front door. His shoes crunched the broken glass. He jerked open the door and the bell gave a traitorous jingle.

Carolyn Lyall was born in Stockton-On-Tees, United Kingdom. As a child Carolyn growing up in Northern England in the sixties Carolyn loved sports, reading and amateur dramatics. She joined a renaissance group, practiced the broadsword and dreamed of visiting other worlds. Her passion for what could be drove her forward when faced with everyday struggles. Her first memorable skirmish with gender inequality came at nine-years old when she was told that only boys were allowed to play soccer. In response, she simply refused to do any classwork until they changed their old-fashioned policies. She won that battle. 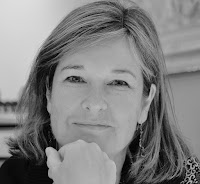 At the age of 18, she took a role as typist for a nursing school in Middlesbrough. She then moved to London and enrolled in night school. She was quickly recognized for her ability to fit in anywhere and for not being afraid to push back on the predominantly male leadership. She eventually became a project manager in software development and micro-computers, bridging the gap between computer programmers and management.

Her dream to travel was finally realized in 1990 when she moved to New York City, USA with her husband and the first of three sons. This was the steppingstone to a lifelong adventure that has taken her and her family to India, Belgium and Hong Kong.

Raising her family in multiple countries around the world, she saw that each move, while a shock, was an opportunity for her sons to redefine themselves against new challenges and different cultural norms. Now, that her sons have left home, Carolyn has used her passion for the fantastic to create a world where every day gender inequalities are at the forefront of a world ending conflict. She shares this story through the eyes of a young man who is suddenly thrust into this new world along with all of his own woes and prejudices. The introduction to this world is in Carolyn’s debut YA fantasy novel, “The Virus of Beauty,” due to be released July 31, 2019 under C B Lyall.

Carolyn has published two short stories in an annual anthology by 25 Servings of Soop. She wrote a number of articles for the American Women’s Associates Magazine.  Fueled by her love of the works of Terry Pratchett, Sarah J Maas, Cassandra Clare, Brandon Sanderson and others, Carolyn has completed a number of writing courses, which included a Master Fantasy/Science Fiction writers course with Gotham Writers’ Workshop, a YA Voice class and Advance Novel Writing course at Sarah Lawrence College’s Writing Institute.

Email ThisBlogThis!Share to TwitterShare to FacebookShare to Pinterest
Labels: YA Fantasy, young adult