Patricia V. Davis will be awarding a $25 Amazon/BN GC to a randomly drawn winner via rafflecopter during the tour.
See below to sign up for the Giveaway. 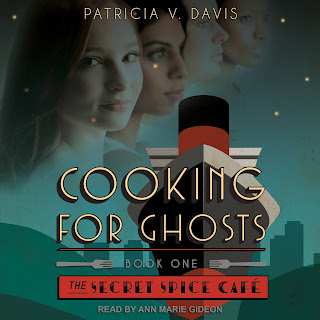 Do hearts broken long ago forever leave a tangible trace?

A Vegas cocktail waitress. An Indian herbalist. A British chemistry professor. An Italian-American widow. Four unique women with one thing in common: each is haunted by a tragedy from her past.

Cynthia, Rohini, Jane, and Angela meet on a food blogging site and bond over recipes. They decide on impulse to open The Secret Spice, an elegant café on the magnificent ocean liner, the RMS Queen Mary, currently a floating hotel in Long Beach, California. Rich in history and tales of supernatural occurrences, the ship hides her own dark secrets.

The women are surrounded by ghosts long before they step aboard, but once they do, nothing is quite what it seems. Not the people they meet, not their brooding chef's mystic recipes, and not the Queen Mary herself. Yet the spirits they encounter help them discover that there's always a chance to live, as long as one is alive.

eally an enjoyable read. While I might not be a paranormal genre person, all you have to do is mention cooking and I’m picking up the book.  But this didn’t start out how I thought it would at all. It sort of grabbed you at the beginning just by learning about the main characters.

While this is fiction, it is really a nice blend of history. Almost making the story real, but oops, there are ghosts. You just tend to forget that as you read. You get too swept up in the storyline. Sometimes I was amazed that the switch from one character to another seemed very clear. This has to be good writing because often when a writer adds so much back and forth between characters it can be confusing. Nothing irritates me more than to have to look back to see “who was whom” so to speak. That didn’t ever seem to happen here.

Cooking for Ghosts is Book 1 of a series titled “The Secret Spice Café”. To date there are 3 books in the series. All have very good reviews.

Unconcerned with what her business partners were up to, Rohini was giggling with excitement. Hugging herself, she whirled in circles, then flung her arms up over her head and collapsed back in dizzy elation onto the enormous bed in the glorious stateroom. Everything was glorious. She was here. This was her room. The Secret Spice was, in part, her restaurant.

And when she’d first seen the Queen from the back seat of Cynthia’s preposterous little car, she knew she was headed to exactly where she should be. She couldn’t stop smiling, until, abruptly, a lump formed in her throat and her eyes misted with tears.

She sobered as she thought of him, of all he’d done for her, and all that she might still need to do on her own.

But that wasn’t for today. Today was for celebration and thankfulness. Getting up from the bed, she opened her case, pulled out all the little plastic sacks of spices and herbs she’d packed, and sighed with relief. Not a one had opened or torn. Even so, she could smell their pungent bouquet right through the protective wrappings. Rauvolfia, Serpentina, Jaiphal, Javitri, Khus Khus, Ashwagandha and more — why did cinnamon always smell the strongest? There were dozens of varieties that she’d stuffed inside shirt sleeves and trouser legs and white cotton gym socks, just like a drug dealer might hide a stash. The TSA had missed them completely. They’d even affixed a sticker to the top of her bag: “Checked by Homeland Security.”

Giggling again at that, Rohini placed all the smaller sacks into a large white bag she’d found in the wardrobe. The bag had a price list for various laundry services printed on it. With that mission accomplished, she took her treasures downstairs to the kitchen.

But she wasn’t two steps in before she stopped stock still and remained right where she was, listening.

Now she understood why she’d felt that the ship had summoned her. To anyone else who might peek in, the kitchen appeared silent and empty. But not to Rohini. She could hear the walls sighing.

Gradually, she walked further inside, and the sighs turned to whispers. She stood still, breathing cautiously, waiting, watching. In unison, the stainless steel cooking utensils dangling from the long, narrow cylinders that were screwed to the walls began to sway, soundlessly. The copper pots that hung from the ceiling over the two spanking-new ovens and eight burner stoves began to twirl, gracefully. Every inanimate object in the room that wasn’t bolted down was waltzing eerily, on its own. To Rohini, the dance seemed sad rather than ghoulish.

Walking quietly, listening carefully, she followed the hushed sounds as they moved along the walls, leading her back to the scullery. As she approached, an ancient, enormous, floor-to-ceiling freezer blew out a puff of ice cold air as its door swung wide open as though it were greeting her, then gently clicked closed again.

Unafraid, Rohini observed it all. Still clinging to the laundry bag filled with her precious sacks of spice, s she turned in a full circle, leisurely, so as not to miss any of it. After a while, she set the bag down on one of the gleaming stainless steel work tables. Bending into a full and formal curtsy, she spoke aloud.

It is my great honor to meet you, Your Majesty.”

PATRICIA V. DAVIS's debut novel series, THE SECRET SPICE CAFE, is comprised of three books: COOKING FOR GHOSTS (2016) SPELLS AND OREGANO (2017) and DEMONS, WELL-SEASONED. (2019) The audio books will be released in 2020 by Tantor Media, and narrated by Ann Marie Gideon. Patricia lives with her husband, who is both a poker player and 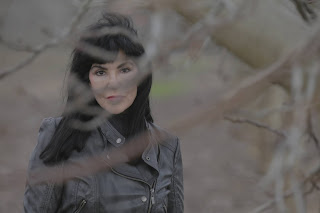 a rice farmer, so she divides her time between southern Nevada and northern California. Say hello to Patricia at her author website: www.TheSecretSpice.com