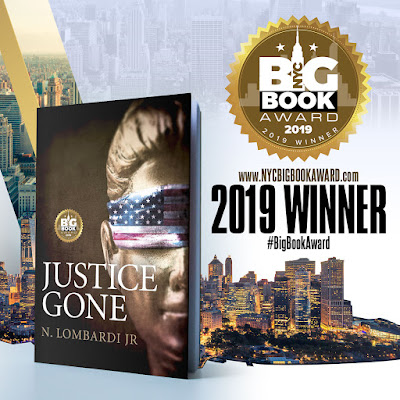 Chosen by Wiki.ezvid.com among their list of 10 Gripping and Intelligent Legal Thrillers

The courtroom scenes are wonderfully written...the characters are well described and the author paints a picture of each in the mind of the reader...Strong plot, strong characters and a strong writing style that I really enjoyed. This one is a definite "thumbs-up." Strongly recommend! I look forward to reading additional works by N. Lombardi, Jr.

One of my favorite suspense novels of the year. It will make you question the legal system.

The courtroom action is excellent, trimmed to the most gripping parts of the trial, with plenty of emotional impact...a fairly realistic portrayal of the way small-town US society works...a fast-moving story with plenty of dramatic moments, and a big twist in the final pages.

An act of police brutality hurls a small town into a turmoil of rage and fear, igniting a relentless witch hunt and ending in the trial of the decade.

"When a homeless war veteran is beaten to death by the police, stormy protests ensue, engulfing a small New Jersey town. Soon after, three cops are gunned down.

Now, the only people separating him from the lethal needle of state justice are Tessa and ageing blind lawyer, Nathaniel Bodine. Can they untangle the web tightening around Darfield in time, when the press and the justice system are baying for revenge?”

Sometimes when you begin a book, you just know it’s going to be something you want to read. I’m not exactly sure how to describe that feeling. It doesn’t necessarily have to be an exciting scene that starts in the first paragraph. I think it is the flow of the writing, the kind that keeps your interest. This book had that flow, at least it did until it blasted me in the face with action. Wow, what a start for a novel. I was appreciative of his writing; mad at the story and the injustice. I was a little of everything and that is because the author and his words made me that way. That means having the talent to write mere words on paper and create a huge amount of emotion in your readers.

Injustice, unfairness, unwarranted violence, our cops and our military, are easy subjects to write about and evoke emotions as I said in the previous paragraph. They are also subjects to create interesting characters around. That happened here and some really enjoyable characters came out of this book. characters you hope to read more about.

5 Stars of my very few 5-star reviews of the year.

Note: I have communicated with Nicolas Lombardi and I have to tell you, not only is he an excellent author but he's a good, kind man.

Like his Facebook page. Read his book and leave a review on Amazon and Goodreads. He deserves it.

N. Lombardi Jr, the N for Nicholas, has spent over half his life in Africa, Asia, and the Middle East, working as a groundwater geologist. Nick can speak five languages: Swahili, Thai, Lao, Chinese, and Khmer (Cambodian).

In 1997, while visiting Lao People's Democratic Republic, he witnessed the remnants of a secret war that had been waged for nine years, among which were children wounded from leftover cluster bombs. Driven by what he saw, he worked on The Plain of Jars for the next eight years.

Nick maintains a website with content that spans most aspects of the novel: The Secret War, Laotian culture, Buddhism etc. http://plainofjars.net

His latest novel, Justice Gone was inspired by the fatal beating of a homeless man by police.