Memoir of a Hockey Nobody

This post is part of a virtual book tour organized by Goddess Fish Promotions. Jerry Hack will be awarding a $20 Amazon/BN GC to a randomly drawn winner via rafflecopter during the tour.  See below to sign up for the GIVEAWAY. 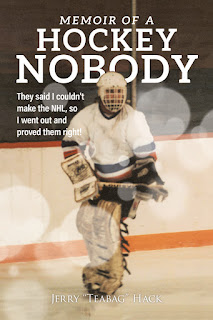 Memoir of a Hockey Nobody is the unlikely true story of an average Canadian kid who grew up playing street hockey. Although he didn't learn how to skate until his late teens, he took a shot at entering the world of professional ice hockey with, shall we say, haphazard results.

This is an "against all odds" tale of one man's journey from Vancouver, to all over Western Canada, California, The Yukon, and Alaska. Seemingly blocked at every turn, from managers who believed that someone who came from such humble beginnings couldn't be any good, to coaches who would rather see big names with bigger reputations. It's a story of tragedy, triumph and determination. A roller coaster ride with hilarious anecdotes of all the characters he met along the way.

This is a tale for those who dare to live their dream!

“I managed to figure out how to get my pads on over my skates, and then the rest of the equipment followed. The Zamboni took about ten years to get off the ice. The time came for me to make my debut. The definition of inauspicious is as follows: “showing or suggesting that future success is unlikely”. Inauspicious doesn’t even come close to describing my entrance to the game of ice hockey. When I stepped on the ice there was about a one-foot drop from the gate. I stepped down and tried to skate, but the equipment seemed like it weighed a ton and was toppling me over. The skates were not helping as there was no resistance under my toes. I fell over onto my hands and knees and needed help getting up. I’m sure the guys were all thinking that they got the one goalie in Vancouver who was worse than Lonnie.”

I was born and raised in Burnaby, British Columbia. My sisters and I were raised by hard- 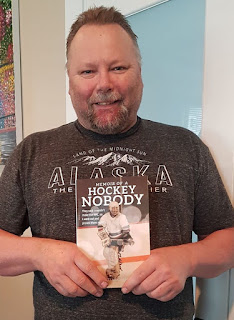 working blue collar parents. We were and are a tight knit family. I grew up loving sports but hockey most of all. In fact, it was my passion. I read about it, watched it and played it. I was an average student and a good athlete. I could play most sports without looking out of place. But I was born to be a goalie. I graduated from high school in 1979 and a year later began my journey playing ice hockey. 40 years later, I am happily married with a 12 year old daughter and loving life more than ever.

1.   Does this book have a special meaning to you? i.e. where you found the idea, its symbolism, its meaning, who you dedicated it to, what made you want to write it?

A: First of all, thank you for having me on your blog. I am thrilled to have my book on your outstanding website. This book is my first and possibly only one. It has special meaning because it will remain long after I am gone. I mostly wrote it for my daughter Brooklynn, who is 12 going on 25. At this point she has absolutely zero interest in knowing my story, but I learned after my parents passed away that I really wanted to know their story and since they are gone, I have no way of finding out. So, this book is really for her. When the time comes, and if and when she wants to know my story, she can just pick up the book and read about it.

The idea came from Facebook. I had been posting stories and pictures about my hockey playing days and a few people responded by saying that I should write a book. I hadn’t done much writing of any sort since high school forty years ago, but I gave it a shot. I wrote the first couple of chapters and let my wife read what I had written. She encouraged me to keep going so I finished it. I found it very cathartic in that I basically had to re-live my life all over again. All these memories came flooding back to me. All the good, the bad, and the cringeworthy. I felt I was able to release some demons that I hadn’t really dealt with before.

I dedicated it to five different people. My wife and daughter who mean everything to me. My best friend and confidant Terry. My sister Marlene, who passed away from cancer in 2005. She was my cheerleader and my hero when we were growing up. Also, my friend Suzanne who is fighting stage 4 cancer. Partial proceeds of the sale of my book are going to help pay for her treatment. So, if you buy my book, you are helping Suzanne.

2.   Where do you get your storylines from?

A: From my cerebellum. Or is it the cerebral cortex? I always get those two mixed up. In any event, since my book is not a novel but a memoir, the storyline just comes from my memory. However, I am currently working on a novel and I have to say that I have learned that my brain and imagination never really shut down. I am constantly thinking of storylines and conversations and situations that entertain me. I have only recently learned that I have an ability to write these into cohesive stories that may in time, turn into a book. We shall see.

3.   Was this book easier or more difficult to write than others? Why?

Since I have never written a book before, I can’t say one way or the other. However, I found this book to be incredibly easy to write and I feel a little guilty about it. I know that a lot of authors do a ton of research and sometimes it takes years of gut-wrenching labour to finish their books. I wrote this book in two months and it was very organic and seemed to basically write itself. Sorry about that.

A: I tell people that I’m not a writer, I’m a forklift driver. Having said that, I find I’m enjoying this writing thing and people tell me that they enjoy not only what I write, but the way I write. One friend described it as a “conversationalist” style of writing. Like I mentioned before, I am writing a novel and it has nothing to do with sports in any way, shape, or form. Also, there is a news story from the 80’s that absolutely fascinates me. It has been reported on a few times, but I would love to write a book about it from a different perspective. Who knows, I may be a writer after all.

5.   Give us a picture of where you write, where you compose these words…is it a Starbucks, a den, a garden…we want to know your inner sanctum.

A: I know this is unconventional but here it is. This is where I wrote my memoir… in my kitchen. I just found it a comfortable place to work because I don’t have to get up to reach the fridge. I like to write late at night when my wife and daughter have gone to bed, and the house is quiet, and I am the master of my domain. 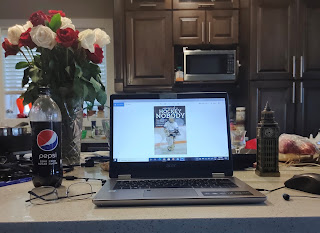 6.   And finally of course…was there any specific event or circumstance that made you want to become a writer?

A: I never really wanted to become a writer and up until now, I have never considered it. This hidden talent of mine has thankfully come to light later in life when I have the time and patience to do so. I never knew how rewarding it would be to put pen to paper and create something where nothing existed before. The resoundingly positive reaction that my book has gotten has completely blown me away. I really never expected it and can’t tell you how pleased I am that people are loving my story. It has certainly changed my life and I am more than grateful for all the support I have gotten. Cheers and thanks again.