The crisp fragrance of pine trees and the warm spice of fresh cookies aren’t the only blessings that Christmas brings, and no one knows more about happy homecomings than three couples who are celebrating the greatest gift of all . . .

STAR OF WONDER by Charlotte Hubbard

When Raymond Overholt comes to Promise Lodge, hoping to sell the barnboard signs he’s painted with stars and Christmas messages, spirited young Mennonite Lizzie Zehr is intrigued. But any courtship between them will face fierce opposition from the bishop of Raymond’s Old Order community—unless someone can convince him that at the heart of faith lies love . . .

read an excerpt... After a deadly dull Monday morning of filling small plastic containers with colored sugars and Christmas jimmies, Lizzie Zehr loaded them onto her wheeled cart and headed into the main room of Promise Lodge’s new bulk store. It was boring work, all that scooping and labeling—repetitive and downright lonely, being stuck back in the warehouse by herself.

But compared to slaving in her older sister Maria’s bakery or, for years before that, running the household for their eldest, crippled sister, Malinda, it was a piece of cake. 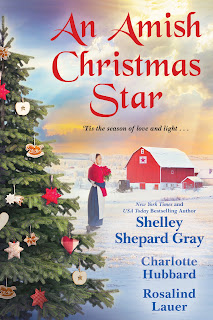 And because Dale Kraybill was paying her, it was freedom. This job was her ticket to independence, an escape from the two bossy sisters who’d been running her ragged for most of her eighteen years. Their parents had passed when she was very young, so Lizzie’s sisters had raised her as best they could—and they expected her to be grateful. She was, of course. But she was also really tired of being at their beck and call.

Lizzie’s thoughts shifted into a higher gear the moment she spotted the guy who was talking to Dale. The two fellows were hanging wooden signboards, which caught her eye because of their sparkly gold stars—but the shimmer of their glittery paint paled the moment the younger fellow turned around. In his green paisley shirt, red jeans, and backswept black hair, he looked anything but Plain, and when he met her gaze through his red-framed glasses, Lizzie immediately knew they were soul mates. Like her, this free spirit was gnashing at the bit and refusing to conform to the religious limitations he’d been raised with.

“Hey there,” he said. His voice, barely audible from across the cavernous room, spoke volumes to Lizzie’s restless heart.

Afraid to say something stupid, she merely nodded and held his gaze. She heard the secretive whisper of soft, small objects hitting a hard surface—or maybe it was the feathery swishing of angels’ wings—

“Lizzie, watch what—you’re spilling jimmies all over the floor!” Dale cried out.

She blinked. She had no memory of picking up a container, just as she didn’t realize she’d been squeezing it so tightly that the lid had popped off. The sight of red and green jimmies bouncing off her bare feet—she wore flip-flops year-round to show off her painted toenails—was suddenly the funniest thing she’d ever seen. As Lizzie sprinted into the warehouse for a broom, her laughter filled the store.

Her life was finally taking a turn for the better. She just knew it. 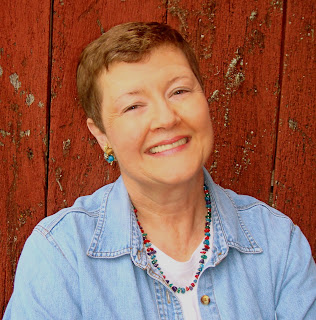 In 1983, Charlotte Hubbard sold her first story to True Story. She wrote around 70 of those confession stories, and she’s sold more than 60 books to traditional or online publishers. A longtime resident of Missouri, she’s currently writing Amish romances set in imaginary Missouri towns for Kensington. She now lives in Omaha, NE with her husband of 40+ years and their Border collie, Vera.