It’s springtime in Washington, D.C. and congressional staffer Kit Marshall has more on her plate than she can handle. With her boss campaigning for an open U.S. Senate seat, Kit is left to run the office in her absence and manage a new weeklong American history extravaganza filled with high-profile events, lectures, and receptions.

When the Director of the Capitol Visitor’s Center ends up dead, Kit springs into action to clear a longtime friend, who becomes the prime suspect in the murder. With her best pal Meg pressuring her to solve the mystery quickly, Kit must figure out how to navigate her closest relationships while keeping an eye out for the diabolical killer.

The investigation takes Kit across the city to famous locations, including Georgetown University, the Smithsonian National Museum of African American History and Culture, and the White House. The cast of characters include two prickly historians, an ambitious congressional colleague who views Kit as a professional rival, a perky intern, and a smarmy high-ranking bureaucrat.

When the killer strikes a second time, the pressure to solve the crimes intensifies. Has our favorite Capitol Hill sleuth finally met her match? In the end, Kit learns the hard way that history tends to repeat itself, often with deadly consequences.

I have read many of the books in this series, and I’ve enjoyed them all. This one is a setting with Kit overseeing a festivity on her own. Of course while she’s in charge, she and Meg find a body. What kind of cozy mystery would this be without a body? Unfortunately, Trevor, a part of their team and now a person of Meg’s affection, has had a shouting match with the now deceased. You can easily imagine who the capitol police have their eye on.

This is another enjoyable cozy mystery by Colleen Shogan. I was hard on this series at first. I felt the characters were shallow, discussing what to wear more than any clues. I called it a sort of Nancy Drew mystery in a political setting. But Shogan seems to have matured her characters with each book. It’s a very readable, visible change, and I’ve enjoyed it. I will still say this could also be read by younger people. It is as clean as can be, not always easy to find. I have a feeling most of what Shogan has written will be that way. I most certainly hope we see more of her books again. 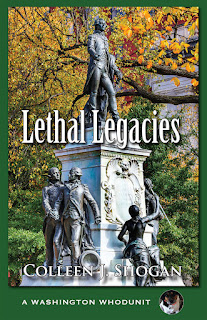 We walked down the aisle of the tent and arrived at the viewing area of the catafalque. There was a ten-foot perimeter around the display, marked by brass stanchions and red velvet rope. Even without stepping over the barrier, it was apparent that something was underneath the black funeral cloth covering the catafalque.

Meg spoke in a shaky voice. “What’s lying on the catafalque?”

I bit the inside of my lip. “I don’t know. Should I get the police officer?”

We looked back toward the entrance of the tent. If he was still there, it wasn’t obvious.

“Someone could be playing a cruel hoax,” said Meg.

Relief instantly washed over me. “You’re right. It might be a clever trick.”

“Are you going to . . .” Meg pointed at the catafalque. “Check it out?” Guests would be arriving soon for the display. We needed to remove whatever was underneath the cloth so it would be ready for visitors by nine o’clock.

“This is ridiculous,” I said, with more confidence than I felt. “I don’t have time for practical jokes.”

I unhooked the red velvet rope from the stanchion and walked up to the catafalque. After taking a deep breath, I pulled back the black broadcloth. All I needed to see was the brown cascading hair before pulling my hand back. This was no hoax. There was a dead body resting on the Lincoln funeral stand. 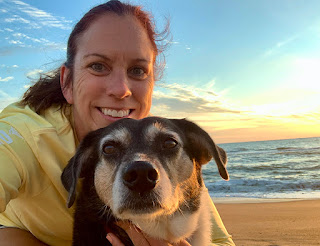 Colleen J. Shogan has been reading mysteries since the age of six. She conceived of the plot of her first novel one morning while taking a walk in her suburban Washington, D.C. neighborhood. A political scientist by training, Colleen has taught American politics at numerous universities, including Georgetown. She previously worked on Capitol Hill as a legislative staffer in the United States Senate and as a senior executive at the Library of Congress. She is now a Senior Vice President at the White House Historical Association, located on historic Lafayette Square.

Colleen lives in Arlington, Virginia with her husband Rob and their beagle mutt Conan. She is a member of Sisters in Crime. "Stabbing in the Senate" was awarded the Next Generation Indie prize for Best Mystery in 2016. "Homicide in the House" was a 2017 finalist for the RONE Award for Best Mystery. “Calamity at the Continental Club” was a 2018 finalist in the “best cozy mystery” at Killer Nashville. “Larceny at the Library” was the IPPY bronze medalist for best mystery.