This post is part of a virtual book tour organized by Goddess Fish Promotoins. The Literary Lobbyist will be awarding a $25 Amazon GC to a randomly drawn winner via rafflecopter. Click on the tour banner to see the other stops on the tour. 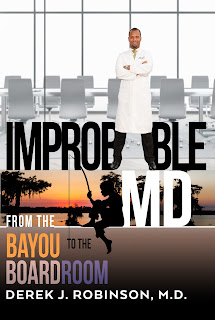 In Improbable MD, Dr. Derek J. Robinson traces his unlikely journey from fishing on the bayous of Louisiana, to an ER and helicopter flight physician in Chicago, to leadership in some of the US’ largest health care organizations.

The grandson of a sharecropper and son of a single mother, Derek grew up in a working-class neighborhood in Shreveport, LA. A graduate of the city’s public schools, he saw first-hand the difference that access to quality education and health care made within his own family. He shares how his dream of being a doctor became a reality, despite the odds, and why he believes mentoring and investing in young people is vital to the health of our nation.

Robinson takes the reader inside the ER, where he has treated victims of gun violence and shares how spilt-second clinical decisions and the trust of his patients, shaped his appreciation for being a doctor, But, even with many years of training, he exposes how it feels to reach the limits of what he can offer patients and even shares the pain and lessons he has learned from the illness and loss of family members. Beyond the walls of the ER, Dr. Robinson explains how we became a business leader in health care and influential voice in boardrooms.

Through sharing his inspirations and tribulations, Dr. Robinson inspires readers to push beyond both self-doubt and external obstacles to pursue their dreams. In telling his story, he shares the roles that faith, friendship, love, and fatherhood have played in his life, and he hopes to motivate readers to chart their own journeys to successful and fulfilling lives. 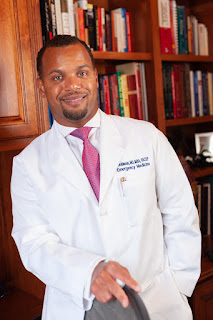 Derek J. Robinson is a board-certified physician in Emergency Medicine. He is vice president and chief medical officer at Blue Cross and Blue Shield of Illinois, a division of Health Care Service Corporation – the nation’s largest non-investor owned health insurance company. In this role, he leads the care management operations division and serves as the company’s primary health care expert.

Dr. Robinson continues to provide clinical care to patients in the ER at the University of Illinois Chicago where he is a clinical associate professor of emergency medicine. His unique perspective on the complexities of healthcare, including his past service as a health care federal regulator, have enabled him to influence the transformation of health care for Americans. He has been featured on WTTW, WMAQ, WLS-TV, BNC, and other news outlets discussing important health care issues and social topics.

A native of Shreveport, LA. Dr. Robinson resides in Chicago, IL with his wife and two sons. When he is not working, he enjoys swimming, cycling, fishing, and spending time outdoors.
For more on Derek Robinson and his memoir Improbable MD visit: http://www.DrDerekRobinson.com