For Lachlan Smith, learning the secret of the apocalypse was the easy part.

Ever since Locksmith found the portal to the future, he has been wondering who or what was responsible for the empty, uninhabited world he found.

Now he knows—and now he has to fight them.

He thought he had fifteen years in which to prevent the extinction of the human species.

Now, he has only hours.

When the portal is stolen by a cabal of dangerous fanatics, his mother and many of his friends are trapped on the other side. Now the enemy is after him, and the only way to thwart their genocidal plan is to retake the portal and hold it—at both ends.

With very little time left, a handful of allies who don't trust each other, almost no chance of success and the survival of humanity itself at stake… Locksmith is going to war.

Then a shot rang out

Then a shot rang out. Chips of wood fell around her.

Crouching lower, Erin could see where the bullet had gone through the door and the opposite wall. A few seconds ago it would have done the same thing, in spite of her torso being in the way.

And it was too late to pretend she was already dead or wounded, so it was time to get out of the way. She fired back through the door — scary how much easier it was to do that when you couldn’t see who you were shooting at — and then ran for the hall. 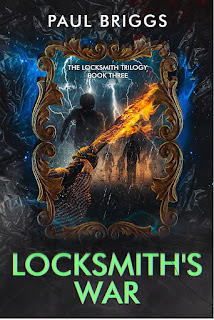 Erin turned… and froze in place, one foot poised a few inches above the first stair. The stairs were pieces of wood, neither soundproof nor (as she’d just seen) bulletproof. The moment she set foot on them, the guys directly underneath would know exactly where to shoot, and she would have only the vaguest idea of where to shoot back. There was no way she could make it to the top of the stairs alive.

Oh… and Luther was going to run into the same problem coming down the stairs. Or maybe not. If the portal was indestructible, he could use it as a shield — put it facedown on the stairs and sort of surf on it. On second thought, no. If they fired through the stairs and the bullet went through the portal, it might hit Lock. Luther would have to put it on the stairs face up and stand on the edges.

Either way, Erin had no idea how she was supposed to explain to Luther that his survival now depended on his ability to replicate a stunt from a Lord of the Rings movie. 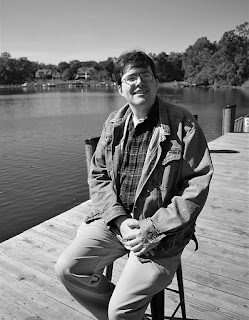 In addition to writing books, Paul Briggs has worked as a newspaper editor, court reporter's assistant, and audio transcriber. In his spare time (when he has any) he sometimes performs in community theater, most recently taking on the roles of Bottom, Petruchio, Macbeth, Rosalind, and Richard III in a Shakespeare compilation. An Eastern Shore native who grew up in Chestertown, Maryland, Paul earned a BA in English from Washington College and a master’s degree in journalism from the University of Maryland – College Park.

He is the author of several short plays, including the award-winning The Worst Super Power Ever and The Picture of Health.  He is also writing the sequel to his 2018 science fiction novel Altered Seasons: Monsoonrise, which vividly imagines the dislocations that follow when the Arctic Sea ice finally melts and the Chesapeake Bay is drowned by the effects of climate change.