Larceny at the Library

This post is part of a virtual book tour organized by Goddess Fish Promotions.
Colleen J. Shogan will be awarding a $75 Amazon/BN GC to a randomly drawn winner via rafflecopter during the tour.  See below to sign up for the GIVEAWAY. 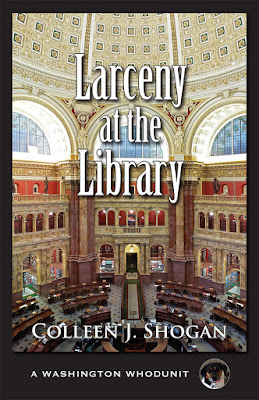 Congressional chief of staff Kit Marshall is finally figuring out what it takes to work for a newly minted committee chair in the House of Representatives. After a swanky evening soiree at the Library of Congress, Kit’s husband Doug discovers the body of a high-ranking librarian inside a ceremonial office. In addition to a murder, there’s also a major theft to complicate the situation. The contents of Abraham Lincoln’s pockets the night he was assassinated have gone missing. Kit’s political boss and the Librarian of Congress ask Kit to investigate, and she’s released into a world of intrigue populated by a frisky donor, an ambitious congressional relations specialist, a cagey rare books curator, an overly curious congressman, and a baseball-loving lawyer. Kit must solve the crime before Doug’s career is tanked by suspicion. The case takes her to the inner bowels of the Library of Congress, Ford’s Theatre, the National Portrait Gallery, and the D.C. Public Library. In the end, Kit must put her own life on the line to retrieve her most valuable possession, which goes unexpectedly missing as she hunts down the killer and thief.

This is the fourth book I’ve read in Colleen Shogan’s “A Washington Who Dunnit” series. I’ve been a little critical. I won’t deny it. I was critical of Shogan’s characters. They seemed very young and somewhat well… shallow, in the earlier books. The last book I read, Book 5, did not seem that way nor does this one. Each time, it seems as if the author’s characters have grown. Maybe grown up is a better phrase. Kit’s friend Meg is now stuck on restaurants rather than clothes and make up and she’s still fun, but her conversation is much more pertinent. More real for someone her age. Kit’s interaction with her new husband seems more real too.  I have repeatedly said each book was clean and fun to read.  Somewhat like a political and mature Nancy Drew series. Not one word of that is meant as a criticism.

All four friends work together but Kit is the true amateur sleuth. But do you know what else I really liked about this book? Instead of your normal cozy where the amateur sleuth tries to avoid the local cop no matter how much he or she is warned, Kit works with law enforcement. How fun as a reader to not have to wonder why the amateur sleuth always sneaks around. It’s almost like a cozy requirement. This one is refreshingly different.

So now that I have gone on and on (sorry) let me say this is an enjoyable and clean read. It’s a good cozy mystery as is the whole series. Don’t miss out.

Dunlap motioned for me to follow inside her private office. With a spectacular view of the historic Jefferson Building and the United States Capitol accompanied by floor to ceiling windows, the Librarian’s corner suite constituted prime real estate on Capitol Hill.  Her desk was littered with papers and books. I appreciated a disheveled work space and instantly felt at ease with the homey appearance of her personal space.

“Please sit down, Ms. Marshall,” she said, pointing to a leather armchair. She took a seat directly opposite me, straining to offer a smile.

“I’ll touch base with Sergeant O’Halloran later this afternoon,” I said. “I’ve already done a preliminary survey of the immediate suspects so we can talk freely about where the investigation stands.”

“Impressive,” said the Librarian, her hands folded neatly on her lap. “How did you come up with such a list?”

I explained that a limited number of people knew that only her fingerprints and Gustav Gaffney’s could open the safe. Given Doug’s observations, if we assumed that Gaffney was killed last night instead of this morning, then only those already inside the building would have had access to the Librarian’s ceremonial office. That narrowed the list of possible suspects considerably.

“Then who are we talking about specifically, Ms. Marshall? asked Dunlap. “After all, I’m in charge of the Library of Congress, and I need to know who might be responsible for these heinous crimes.”

“Of course, ma’am.” I ticked off the known suspects with my fingers. “There’s Gordon Endicott, Joe Malden, Lea Rutherford, Janice Jackson, and Congressman Henry Chang.”  After taking a breath, I continued. “The police likely consider my husband Doug Hollingsworth a suspect, too. But I don’t.” I chuckled. “For obvious reasons.”

“Thank you for those names, Ms. Marshall,” said the Librarian, now with a pinched expression on her face. “I’m afraid you’re going to have to go back to the drawing board.”

“Many of those individuals are my employees here at the Library of Congress,” she said. “None of them could have killed Gustav Gaffney or committed theft.”

“It’s hard to imagine a colleague you know and trusted could have done this. But I’ve seen this unfortunate scenario time and time again. You’d be surprised what motivates people to do horrible things." 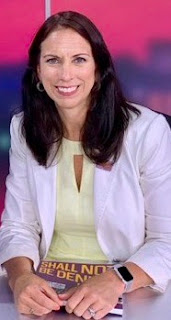 Colleen is a member of Sisters in Crime. "Stabbing in the Senate" was awarded the Next Generation Indie prize for Best Mystery in 2016. "Homicide in the House" was a 2017 finalist for the RONE Award for Best Mystery. “Calamity at the Continental Club” was a 2018 finalist in the “best cozy mystery” at Killer Nashville. She lives in Arlington, Virginia with her husband Rob and their beagle mutt Conan.