This post is part of a virtual book tour organized by Goddess Fish Promotions. Carolyn Wren will be awarding a $20 Amazon/BN GC to a randomly drawn winner via rafflecopter during the tour. Click on the tour banner to see the other stops on the tour. 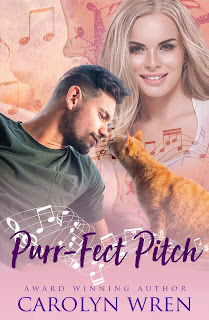 When his ringing doorbell wakes Devlin from a post birthday party hangover, he finds a beautiful singing telegram dressed as a kitten on the other side, who leaves him intrigued and confused in equal measures. His mysterious songstress has the voice of an angel and the devil’s own temper to match.

Katherine ‘Kat’ Grant has one dream, and that’s singing. To achieve it, she needs admission to the exclusive Perdies College of Music. Kat’s adolescent years were difficult, being dependant on the charity of others left her with a fierce independent streak and a loathing of special treatment. She’ll succeed on her own merits without anyone’s help, especially the cheeky, alluring Devlin who seems to have squeezed himself into every aspect of her life...

Devlin knows he has the power to make all of Kat’s dreams come true. But wielding that power means he could lose her forever.

Can a charismatic cat loving hero and his sassy stubborn singer find their own love song?

Find out, in Purr-fect Pitch.

This is a story about music and love. It’s a story about wanting to make it in the system and to make it on your own. I’m making this sound like a little deeper story than it is, but I will say it has a different setting which makes reading it more fun.

This is about a young woman who wants to make it in the music field. She wants to be a singer, a trained singer, and she wants to achieve that by going to a prestigious music school. Through some supposed event she happens to  meet and of course...you got it...fall in love with the head and owner of the school.

Both characters are well-defined. You can picture them hiding in the wardrobe hugging in his office at school. And that’s a picture of what this book is. It’s cute. It’s a feel-good story with some pretty strong characters wanting to get what they want in life. Enjoyable read.

“I don’t want you falling.”

“You’ve seen me run in heels.”

“Fair point, I—” his voice dropped away.

“Devlin? Devlin? Where’d you go?” Kat felt around beside her in the dark and came up with empty air.

“Ouch, down here. I tripped over the ornamental rockery.”

“What? Are you hurt?” She dropped to her knees, searching for him, her questing hands encountering the fine wool of his trousers. His quick intake of breath was her first clue, even before her fingers brushed against the zipper at his groin. Kat yanked her hand away. Great, now she was groping him.

“Is my chin bleeding?”

“I can’t see. Stay there, let me get my phone.” Kat rummaged through her shoulder bag, and flicked on the phone’s torch app. Light flooded the area, revealing Perdies owner sprawled on the ground, one foot snagged under a large rock.

“I knew that bloody rockery was a bad idea.” He dabbed the grazes on his chin and cheek.

“Here,” she handed him a tissue. “Can you move? Is anything broken?”

All that languid grace and elegance had vanished, lost in an awkward tangle of limbs. Kat bit her lip to fight off a giggle.

“Are you laughing, Katherine?”

“No.” The single, high pitched word would have made a castrato envious. 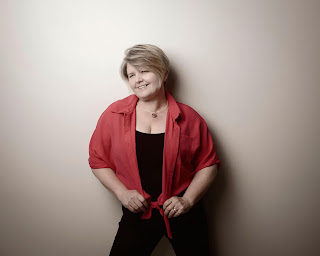 After spending her working life in the finance sector, mostly in the mining industry, Carolyn began writing in 2009, just for fun. Much to her surprise, she won the very first writing contest she entered, the Australian based Emerald Award for unpublished manuscripts, and one week later received a commendation from the International Daphne Du Maurier Awards for Excellence in Mystery/Suspense. This gave her the incentive to keep writing, and to pursue a publishing deal. As at June 2020 Carolyn has 7 winners trophies and 15 finalist certificates from contests all around the world. Her books are published through Australian publishing houses, Serenity Press and Gumnut Press with future releases due with UK publishers Vulpine Press.

Carolyn likes to let her characters take control. The resulting stories range from light hearted comedic contemporary through to sexy, action packed romantic suspense and emotion driven urban fantasy. One thing remains constant in all her books, she’s a romantic at heart and loves a happy ending.