This post is part of a virtual book tour organized by Goddess Fish Promotions. C. B. Barlow will be awarding a $25 Amazon/BN GC to a randomly drawn winner via rafflecopter during the tour. Click on the tour banner to see the other stops on the tour. 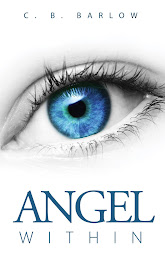 Sixteen-year old Rachel has an over protective but loving mother and a boring but safe life. All this changes in a blink of an eye. Rachel is now an orphan and learning she is more than human. She is thrust into a new world of friends, family and love along with fears, foes and evil. Evil that seeks to destroy her and all she holds dear.

We sat there in silence, gliding some more. The only sound was the rhythmic creaking of the glider. I looked over at Dylan, sitting there with his head back and his eyes closed. His thick black lashes were incredibly long, especially for a guy. They rested on the top of his cheekbones. He seemed peaceful and content. At that moment, I wanted to know his story.

“How long have you lived here with the Morgans?”

“I came when I was seven. That makes it ten years,” he answered without opening his eyes.

“What happened to your parents?”

“Don’t know. I think they gave me up. The only memory I have is someone holding my hand and then walking away without me.”

I imagined Dylan as a little boy, a cute little boy, almost the same age as Destiny, being alone and scared. My heart ached for that little boy. And for him, now. Losing a parent because of their death is one thing, but being in a foster home because your parents are unfit or they gave you up is another.

He opened his eyes, “Yeah.” He sat up and removed his arms from the back of the glider. “That was a long time ago.” His fingers raked through his hair, and there on his forehead above his left eye was a bruise the size of a fist.

My eyes widened as my hand instinctively went toward the bruise, but I stopped myself and pulled back. “Oh, my! Dylan, did Mr. Morgan do that to you?”

“Just a token of affection,” he answered and tried to make light of it as he brushed his hair back over to hide the bruise.

About the Author: Cindy has lived most of her life in Erie, Pennsylvania, just a stone’s throw away from where her main character lives. She traded in the bitter cold winters of Erie for the sizzling hot summers when she moved to Phoenix, Arizona. She is an avid reader of all genres of books and has a passion for anything angel related. When she is not working full time as a Registered Nurse, she enjoys writing. Recently Cindy decided to mash up her enjoyment and her passion into a book. She hopes her readers will have as much fun reading this book as much as she did writing it.